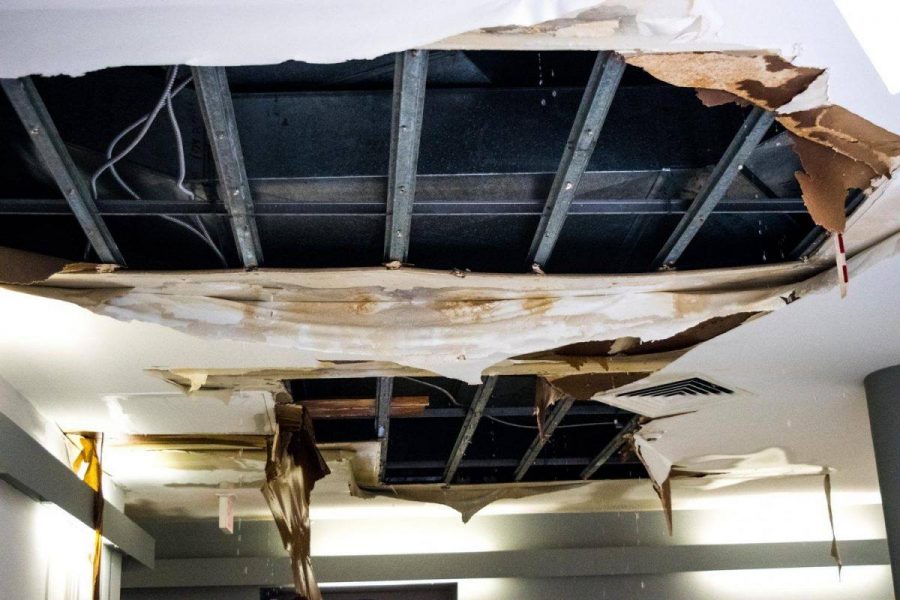 Water leaks through the roof in the Suraci Gallery in the Shield Center for Visual Arts.

Marywood’s Suraci and Mahady Galleries are still being repaired after a leak caused minimal damage on Sept. 24.

The damage occurred when a heating coil broke and water fell through the ceiling, according to Suraci Gallery Director Margurite Fuller.

Fourth-year architecture student Christian Frankhauser discovered the incident. Immediately after he reported it, the Suraci and Mahady Gallery directors hired a professional clean-up company. The company used high-powered vacuum systems and industrial dehumidifiers to extract the water. Gallery staff monitored the humidity in areas where artwork may have been affected.

There was minimal water damage in the hallway area outside the second-floor Suraci Gallery, according to Fuller. The only area within the gallery affected was a small area of the carpet that was briefly wet, but dried later that day with the high-powered vacuum systems. Fuller confirmed that no artwork in the Suraci Gallery was damaged.

On the first-floor of Mahady Gallery, there was no artwork on exhibit and nothing was damaged. There will be minimal drywall replaced in the hallway outside of the gallery space and some ceiling areas will be painted with a special sealing paint for protection against any future water leakage.

Fuller said the cleanup has been a smooth process due to a prompt reaction to the incident.

“Everyone from maintenance and security have been doing an excellent job to expedite the cleanup process from the water damage,” said Fuller.

Due to the incident, classes in the Shields Center for Visual Arts had to be relocated to other facilities. This included Associate Professor of Art Pamela M. Parsons’ art history class, which was relocated to the Center for Healthy Families (CHF). Parsons said that the process of relocating class was relatively easy.

“Although the incident was sudden, the move to the CHF went smoothly and I am enjoying the new room’s facilities while teaching art history,” said Parsons.

The galleries are closed until further notice. However, the Graduate MFA Exhibition will open in early December as scheduled.