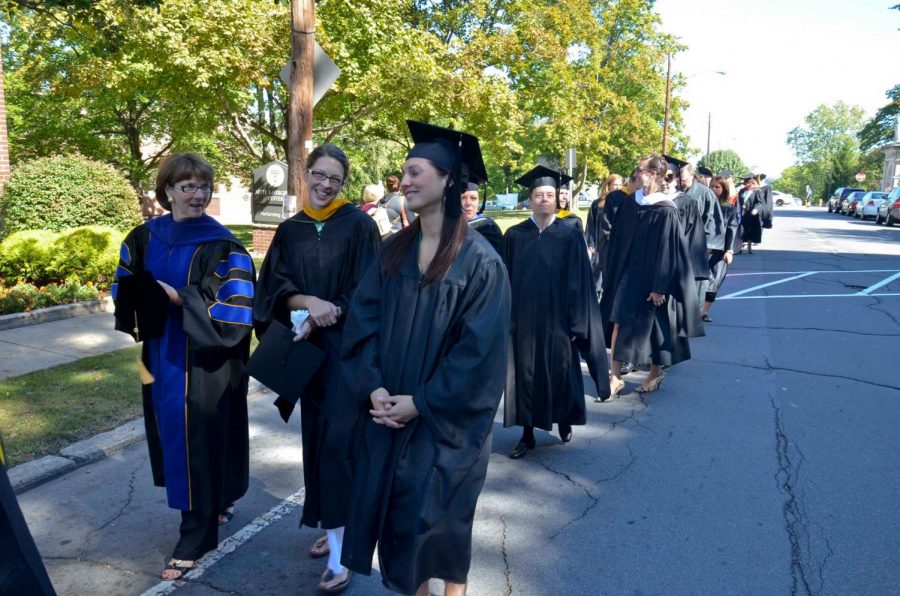 As usual, the fall semester was a busy one. That could be why some didn’t notice that this year, there was no traditional academic convocation ceremony.

Marywood usually celebrates a new academic year with a fall convocation ceremony held in September for the entire Marywood community. This year, convocation was held on Aug. 23, one week before classes officially started and students were back on campus.

Marywood President Sr. Mary Persico, IHM, Ed. D, said the university held a convocation solely for faculty and staff, instead of for the entire Marywood community. She added that this had never been done before.

According to Persico, faculty and staff usually have a separate meeting in August before classes start, in addition to the convocation.

“We decided to have a special convocation of everybody who worked on campus … kind of the state of the union after all of the changes that went on last year and all the changes that took place because people still have questions,” said Persico.

Faculty and staff still had questions about salaries, core curriculum and the Strategic Resource Allocation (SRA) process, which was completed last fall and analyzed the amount of resources Marywood allocates to programs, said Persico.

Persico said she thought it would be different to “get everyone in the room together, have breakfast, have a prayer together and a nice welcome back after the summer.”

Fall convocation has been a Marywood tradition, with previous convocations focusing on service, empowerment and respect. University Archivist Jim Frutchey said the earliest mention of a fall honors convocation was on Oct. 4, 1985.

Frutchey said he looks through old Marywood calendars to find dates of previous convocations. A few years did not list a convocation, but Frutchey said there may be other reasons why a convocation was not listed or he did not have a calendar of events from that year.

She added that the university may plan the convocation for next year around the same time as the fall Board of Trustees meeting.

According to Director of Conference and Event Services John Coval, two previous committees relating to convocation merged into one committee this year.

According to Marywood’s website, the recommendations from the final SRA report initiated the merger of the committees.