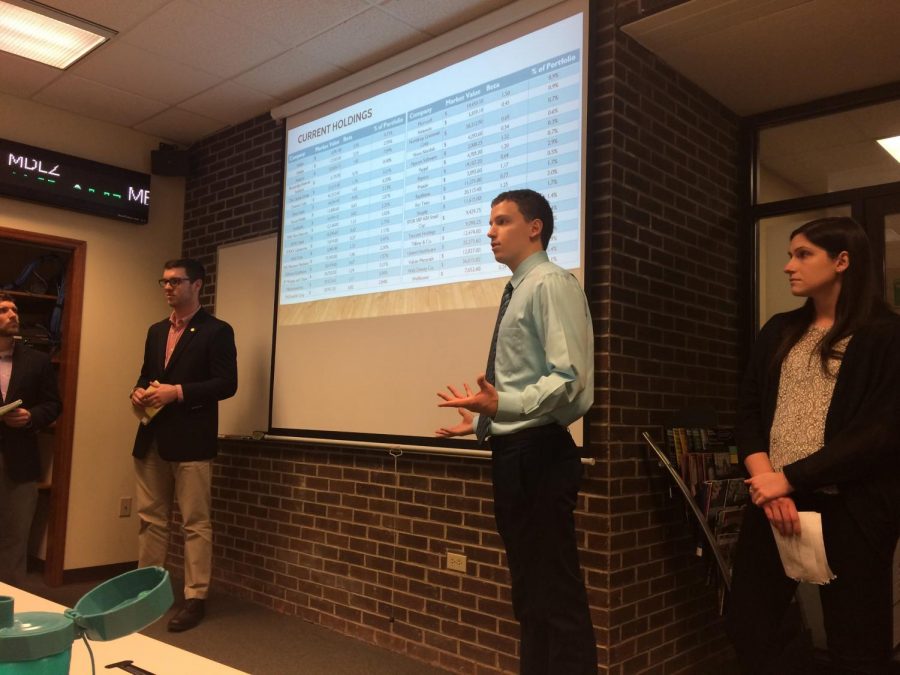 The Pacer Investment Fund, an investment account managed by Marywood finance students, began in 2007 with a $25,000 donation from former Marywood Board of Trustees member Mary Murray.

“The market was good, but we were better,” said the account’s Investment Analyst Joe Hunt.

The profits the fund has gained are reinvested into the fund for capital growth and discretionary improvements within the Marywood business program.

Although the account is student managed, it does receive assistance from an advisory committee of faculty members. This year, the group also received advice from an industry professional, which the account’s Student Director Daniel King said he believed helped them.

“This year, we began working with Rory Cummings, a portfolio manager, from Prudential [Financial] who was able to guide us,” said King.

The students involved took this year’s annual report to provide an overview on the thought process of investments last year. King described the account’s investment goal as “capital preservation with moderate aggressive growth,” which leads the group to take risks similar to the overall market, but with higher returns.

This year, the students began to invest in more environmental, social and governance (ESG) stocks. Many accounts choose to invest in these stocks because of the ethical impact that it has on society.

“We wanted to make more investments this year that reflect our core values as a university, so the investments that we made to ESG companies were not only a win for us financially, but also as Marywood students,” explained Hunt.

Hunt explained that the political landscape this year also played a major role in not only the account’s investment choices, but also the activity of the overall market. Hunt said that although other people who manage funds may have been scared off by politics, the group working on the Pacer Investment Fund was not.

“Political impact was a huge component on how the market was going to do and I think that we handled that well,” said Hunt.

King said the students working on the fund have an optimistic outlook for how the political landscape will affect the fund in the upcoming year. King explained that their viewpoint comes from President Donald Trump’s tax reform bill.

“We believe that companies will take advantage of the tax reform bill, which will in return help the fund’s investments,” said King.