Campus sexual assault through the lens of Marywood employees 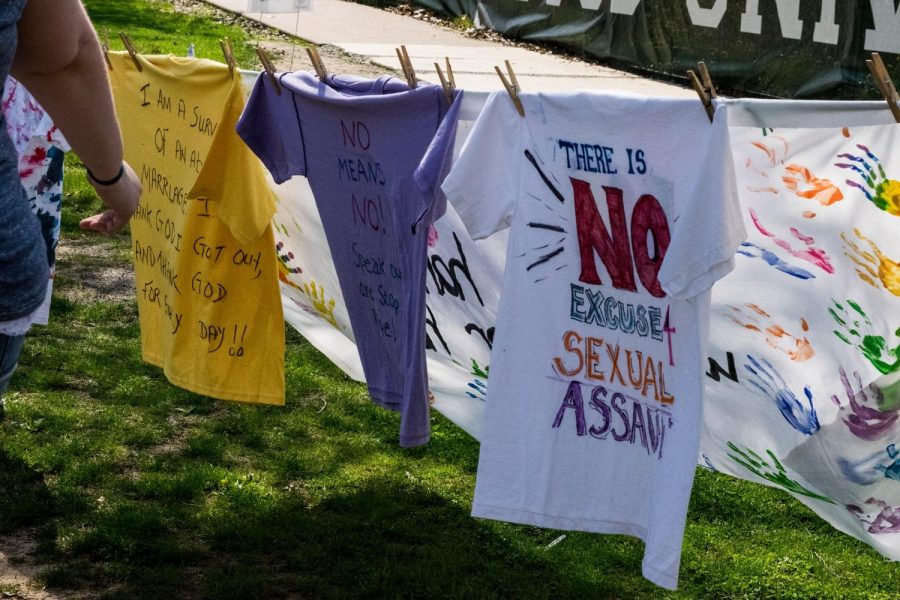 When Associate Director of the Counseling and Student Development Center (CSDC) Barbara Decker began working at Marywood, one of her clients, a sexual assault survivor, helped initiate one of the center’s largest events on campus.

Sixteen years later, the CSDC still holds its Release the Light event each April for Sexual Assault Awareness Month in an effort to raise awareness of sexual assault and “change the culture” around the subject.

When Decker works with sexual assault survivors, she views their stories as more than just traumatic experiences. 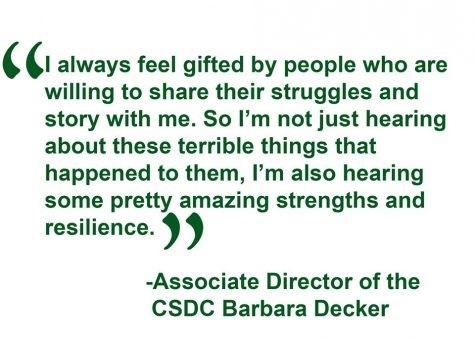 “I always feel gifted by people who are willing to share their struggles and story with me,” Decker said. “So I’m not just hearing about these terrible things that happened to them, I’m also hearing some pretty amazing strengths and resilience.”

In the past four years, 20 percent of women and five percent of men who attended college experienced sexual assault, according to a poll conducted by The Washington Post and the Henry J. Kaiser Family Foundation.

At Marywood, two forcible non-campus sex offenses were reported in 2016.

Each statistic differs from 2015, where there were no reports of non-forcible or forcible sex offenses for on-campus, non-campus or residence hall categories.
Who has an obligation to report sexual assault?
Any person employed by a college or university is generally a mandated reporter, meaning they have an obligation to report a sexual assault if a student discloses an incident to them, according to Assistant Vice President for Student Success Meghan Cruciani.

Mandated reporters let students know their conversations cannot be kept confidential if they reveal an incident like a sexual assault. 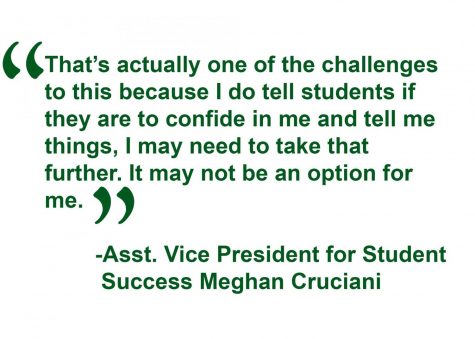 “That’s actually one of the challenges to this because I do tell students if they are to confide in me and tell me things, I may need to take that further. It may not be an option for me,” said Cruciani, who also serves as a deputy Title IX coordinator at Marywood.

In addition to employees like faculty and Campus Safety officers, resident assistants (RAs) in on-campus housing also serve as mandated reporters and receive training to understand what that role entails.

“If they feel a conversation is going down a direction where a student might reveal something in that nature, they try and make clear what the mandatory reporting thing means and let people know that if they want to talk to someone in a confidential setting… what those resources are,” Dean of Students and Deputy Title IX Coordinator Ross Novak said.

Regardless of how a student initially reports a sexual assault, it eventually makes its way up the chain to one of the two deputy Title IX coordinators, Cruciani and Novak.

If a student wants to discuss a sexual assault confidentially, they can either speak with a priest on campus or with someone at the CSDC, Novak said. These are the only places on campus where someone would not be obligated to report what a student tells them.

However, Decker said this could still be “tricky.” While she is a confidential source in her role as a counselor, she is a mandated reporter in her role as a teacher and her role as an adviser for groups like Peers on Wellness (POW) and the Relationships and Empowerment Task Force (RAE).
Moving forward after a report
Novak said in most cases, students ultimately decide if a complaint goes through either the university’s sexual assault and complaint procedures process or local law enforcement in order to allow them to control their own situation.

“I feel conflicted about that in the sense that I do think that it takes control away from the individual, but at the same time, there is an obligation to the community,” Novak said. “And if we’re seeing a repeated pattern of behavior that’s happened within the community, that’s also something that’s important to address to avoid other incidents.”
Experiences of mandated reporters
Novak said that when he hears students’ experiences with sexual assault, he tries to put their needs before his own feelings about the situation.

“I think with everything sort of conduct-related, I try to be as objective as possible, but I try to be as attentive as I can to the person that I’m with and sort of dealing with where they’re at and their needs, and no matter what my personal feelings may be, trying to put that first,” he said. “I think sometimes that can be difficult for people who are in the role.”

Novak said if he finds himself in a position where he needs to talk things through, he looks to other people on campus who work in similar roles. Even if unable to share the details, he said it helps to receive support from those resources if he is “struggling or feeling a certain way.”

In her three and a half years as a deputy Title IX coordinator, Cruciani said she has heard a handful of cases related to Title IX, some involving sexual assault. She said she sees students as more than “just a number.” 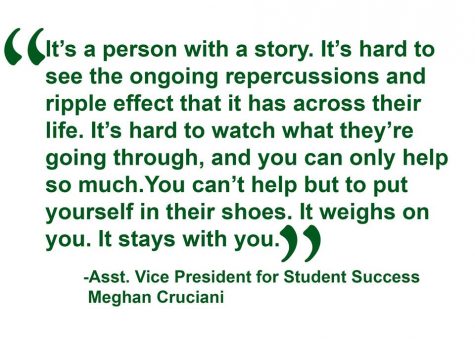 “It’s a person with a story. It’s hard to see the ongoing repercussions and ripple effect that it has across their life. It’s hard to watch what they’re going through, and you can only help so much,” she said. “You can’t help but to put yourself in their shoes. It weighs on you. It stays with you.”

Similarly, Cruciani also seeks out colleagues for support, especially members of the Behavioral Intervention Team (BIT) that she participates in. Through her counseling training, she said she learned the importance of self-care and practices it.

Additionally, Decker practices self-care due to her counseling training, and debriefs with colleagues at the CSDC. She also said in counseling sessions, it’s important for her to know when countertransference is happening and be able to receive consultation on it.

“Countertransference is when I’m maybe triggered in a session and it brings up stuff for me, but it also could just mean that I’m caring so much for this person and feeling so much for them that that can interfere with my effectiveness,” she said.
Marywood reacts to potential Title IX changes
This past September, U.S. Secretary of Education Betsy DeVos reversed an Obama-era mandate under Title IX federal law that requires colleges and universities to use the lowest standard of proof in cases of sexual assault, “preponderance of evidence.”

DeVos acted in an attempt to show more fairness to students accused of sexual misconduct.

Colleges and universities are free to continue using the preponderance of evidence standard, but could now raise the standard to “clear and convincing evidence.” There is no word on whether institutions would be required to adopt a higher standard of evidence in the future.

“I think there’s been a lot of concern about that in terms of the idea that this might do a disservice to complainants and that it might swing back to how it had been in the past in terms of making it more difficult for cases to go through and for people to feel like they are being persecuted again as part of the process,” he said.

The U.S. Department of Education issued a set of interim guidelines for institutions to uphold while Title IX is being reviewed. Novak and Decker reviewed this guidance and saw that Marywood’s current policy meets the criteria and does not need to be changed right now.

In response, they wrote a letter with the Pacers for Justice and Peace (PJP) regarding changes to Title IX. Novak emailed the letter to students on Nov. 21.

The letter states that the policy will remain the same, and that Marywood will continue to conduct “fair, impartial investigations in a consistent and timely manner.” It also lists on-campus and off-campus resources like contact information for Title IX coordinators and local hospitals.

Title IX Coordinator and Associate Vice President for Human Resources Dr. Patricia Dunleavy said she hopes the policy can be kept the same in the future.

“I’m hoping that we can retain our policy. At least right now, we are going to retain it as is and hope for the best. And hope to keep strengthening it,” Dunleavy said.

Cruciani said that while she understands why others might want to change Title IX, she does not want positive progress to be lost.

“It’s difficult when you can sort of see both sides, but I do think we’ve come such a long way in sort of giving that victim the rights and making sure that we are investigating things and reporting them in the way that we should. I don’t want to see that go backwards because I think that has also lead to a lot of people reporting things that they may not have before,” Cruciani said.
Resources for survivors
When a student speaks with a deputy Title IX coordinator, they inquire if the person is safe and inform them of their available resources, according to Novak.

They also discuss options for pursuing the case further and the possibility of providing interim accommodations, like changed living arrangements if they share a residence hall or floor with the perpetrator.

Novak said these accommodations are arranged “sooner rather than later.” If a case is brought through the misconduct procedure, the accommodations are made before the process begins. Additionally, the complainant isn’t always in a position where they need to make an adjustment, although there have been times where they requested it, he said.

Cruciani said one of the concerns people tend to have about Title IX is that is mainly focuses on the rights of victims.

“Obviously, there’s reasons for it, but there is that other side of it,” she said.

She said in instances where a person involved in an alleged assault feels unhappy about certain changes, she and others involved with the accommodations help them understand why they had to be made.

“Oftentimes, they understand it’s in their best interest too,” she said.

The CSDC also does community outreach each year to raise awareness of sexual assault and “change the culture” around it, according to Decker.

Some of this outreach includes events like Healthy Relationships Week and training conducted through programs like Promoting Awareness of the College Transition (PACT). The CSDC also offers bystander engagement training and escalation training.

Novak said he hopes students on campus feel comfortable enough to speak up about sexual assault. Sometimes, there may be a situation that is common knowledge amongst students, but unknown to people like himself because it never makes its way up the chain to be investigated.

He said this could cause a disconnect and lead students to believe nothing is being done.

“I think that in the past that’s happened on a few occasions,” he said. “That’s feedback we’ve gotten, so I’m hoping that students are feeling more comfortable if there are issues, coming forward and having these conversations.”

Cruciani said the prevalence of sexual assault is an unfortunate reality that she hopes changes.

“Unfortunately it does [happen]. It’s one in five on college campuses. There’s so many on our campus that we don’t know about, and I would hope that that’s changing… I hate to think there’s people out there who haven’t talked about it,” she said.