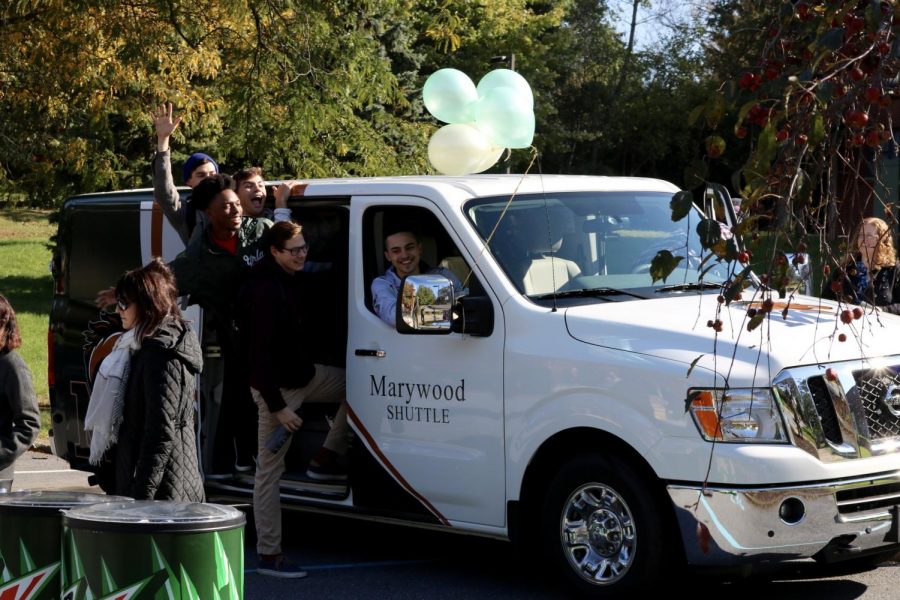 Marywood’s shuttle service had its first route on Oct. 4. The service is the brainchild of Kendall Farrell and Dimitri Thompson, who are both senior business students.

Thompson said the idea was conceived from the two’s personal experiences.

“I didn’t have a car my freshman or sophomore year, so for me, it was something that I related with,” Thompson said. “It was stressful because I always had to borrow someone’s car or take an Uber.”

Farrell and Thompson, who are both New York City natives, said they modeled the shuttle system after dollar cabs, a shuttle-like system that’s popular in their home town. Much like Marywood’s shuttle system, dollar cabs drive up and down the main streets of town, charging passengers $2 per ride.

“Two dollars is the cheapest way to get anywhere in Scranton,” Thompson said. “We thought that would translate perfectly into a college setting.”

The shuttle runs Tuesday through Sunday while school is in session and makes stops at shopping centers, bowling alleys, movie theaters and more. The shuttle’s full schedule and list of stops can be found on Marywood’s website.

Tickets cost $2 per ride in Pacer Points and passengers could board at Loughran Hall and University Avenue.

NET Credit Union provided a $10,000 sponsorship for the project. Farrell said the money will be used for fuel and maintenance.

Farrell said there has been no confirmation if any locations will be added to the shuttle’s route, but proposed that the shuttle should have specialty routes.

“When the weather is nice, students may want to go to Nay Aug or events like the Italian Festival,” he said.

To help educate the Marywood community about the shuttle, Farrell and Thompson hosted an open shuttle event on Oct. 17, where students were able to take a look at the new shuttle and enjoy some food.

Farrell and Thompson said they are planning to pass the management of the shuttle down to other students after the two graduate from Marywood.

“At the end of the day, it’s a product for students,” Thompson said. “Student input is 100 percent wanted and needed.”