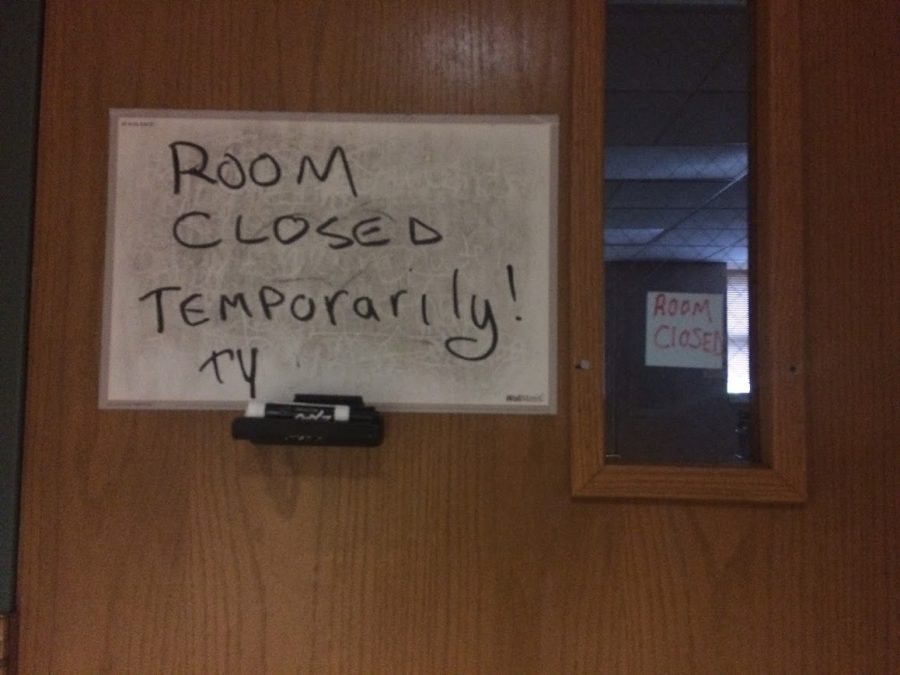 Mold found in the Center for Natural and Health Sciences (CNHS) has caused some classrooms to close temporarily. Photo credit: Briana Ryan

The weather this year has caused many schools throughout the area to confront the issue of mold, and Marywood is no exception.

Dr. Deanne Garver, chairperson of the science department, said the mold growing in the Center for Natural and Health Sciences (CNHS) has been especially tough recently.

“This has been going on for about a couple months due to the rainy weather,” said Garver. “We’ve had extreme humidity, heat and rain, and so it’s kind of one of those things we’ve been kind of going back and forth with for a little while now. Longer than normally.”

Yankelitis said the capacities of the dehumidifiers are to blame for the mold levels.

“The weather this year has really taken a toll on the dehumidifiers,” said Yankelitis.

Garver said mold forced the science department to close two classrooms on the first day of the fall semester.

“We have a couple of labs and classrooms that are more problematic and we have had to close those classrooms so faculty and students are not exposed to them,” said Garver. “On the first day of classes this year, we had two classrooms that we decided not to use to make sure that they were properly clean.”

Two classrooms, along with one laboratory and one room in the Adult Basic Literacy Education (ABLE) area have been closed due to mold in the CNHS this semester. No PAC classrooms were closed.

Only one classroom in the CNHS remains closed. Yankelitis said the classroom had to undergo repairs.

“One room in the science building has been especially problematic with ground water coming up, so we had to rip out the flooring in that room and install a vinyl flooring that would be less apt to have mold growing in it,” said Yankelitis.

Yankelitis said the buildings and grounds department is monitoring the classroom to see how well the vinyl flooring is working. If the vinyl floor proves to be beneficial, the department will begin looking into installing it in other classrooms.

She said a few adjustments were made to the dehumidifying system in the PAC.

“We needed to discharge the air temperature to accommodate the high humidity summer conditions,” Yankelitis explained.

Yankelitis added that some pipe insulation had to be changed because it had become wet from condensation.

Garver said the mold has also caused some students to have health problems.

“There have been reports where students have said that they have had some irritation in their nose and throats or that they have smelled something irritating,” said Garver.

Yankelitis said the effect of mold on the health of a student ultimately comes down to the student.

“People interact with mold every day, so it really comes down to how much mold individuals are able to interact with before it affects their health,” she said.

Yankelitis said she has not heard about any students or faculty who are regularly in the PAC having any health issues caused by the mold.

Noah Karasik-Tiewski, a junior in the pre-physician assistant program, said the mold has caused issues with lab material that compromised student projects.

“The students were using material that may have faulted their own projects in class sessions,” said Karasik-Tiewski.

Garver said the science department has been working with buildings and grounds to help solve the mold issue by bringing in a remediation team and engineers.

“The remediation team came in to take a look at it,” said Garver. “They also have engineers on site to get the systems working optimally to prevent the mold from growing.”

Yankelitis said the mold issue prompted the buildings and grounds department to hire Highland Associates, an architecture, engineering and interior design firm, to examine the CNHS.

She presented the findings of the examination to the Board of Trustees during its Nov. 10 meeting. The board voted to approve the installation of a new dehumidification system in the CNHS.