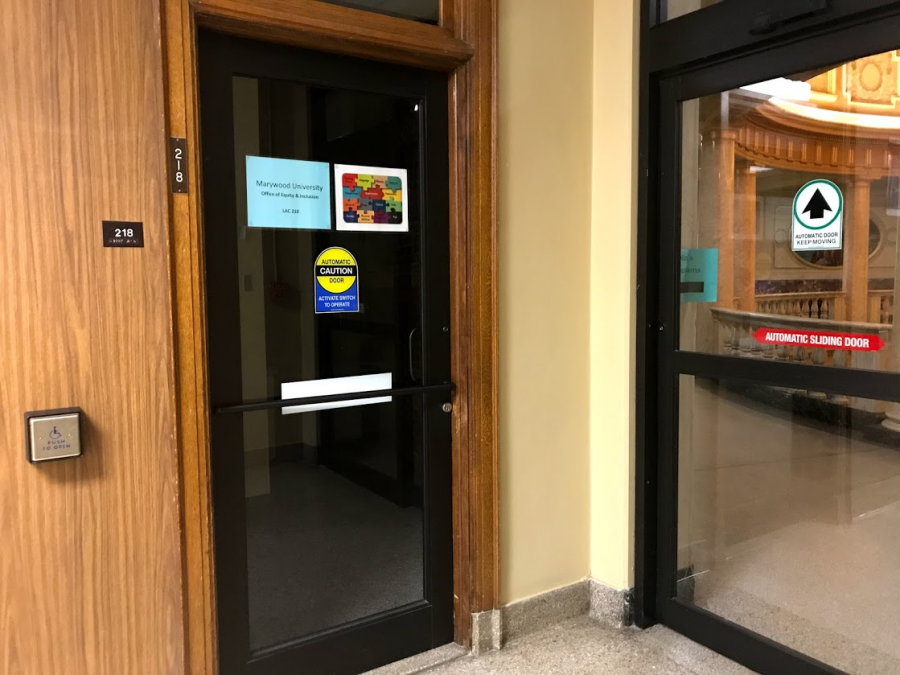 Right now an official location has not been decided; however, the activities of the center will be coordinated through the Office of Equity and Inclusion.

Marywood will join 23 other colleges and universities across the country to host a Truth, Racial Healing and Transformation (TRHT) Campus Center.

Dr. Yerodin Lucas, director of equity and inclusion, Title IX coordinator and grant co-writer, said the idea to apply for the grant came from necessity.

“The need is there and it’s clear,” said Lucas. “We were looking for a way to engage the community and open up the dialogue so that we’re not just in a silo trying to create change.”

Dr. Joshua Deckman, assistant professor of modern languages and grant co-writer, said the center will be a way to break down barriers not only at Marywood but the greater Scranton area.

“The center will be a space on campus to have difficult conversations about race, ethnicity and difference with the goal of really breaking down cultural barriers between people,” said Deckman.

The university assembled a group of faculty and professional staff from across campus to help apply for and implement the grant. Joining Lucas and Deckman in the process is Director of Student Equity and Inclusion Dr. Lia Palmiter, Director of Military and Veteran Services Christopher Smith and Director of Student Disabilities Services Kaitlin Anderle.

Palmiter said she believes the diversity of the group played an important role in Marywood receiving the grant.

“Our group that was applying was the most diverse,” said Palmiter. “We had faculty, we had staff, we had veterans [and] we had disabilities while most of the other schools had faculty or administrators or a combination of the two.”

Before the group was able to apply for the grant, they all, except for Lucas who was still in the hiring process, had to take part in a week-long intensive training institute at Villanova University. Deckman said the purpose of the institute was to get the group thinking about ways they could develop the center.

“When we were at the institute, they infused in us the idea of the THTC and how we can go about establishing it on campus,” said Deckman.

After the week ended, the group regathered with their training to brainstorm goals they had for the center and worked with the Office of Research and Sponsored Programs to help write the grant. Smith said the way they expressed themselves through the grant was important.

“Our group is very passionate about establishing this center and we wanted to make sure they knew this was something that was coming from our hearts,” said Smith.

The first event to come from the center will be a day-long workshop series on Feb. 28 which will feature keynote speakers and opportunities for students to lead discussions. The group hopes to make this an annual event.

To help Marywood develop the center, the AAC&U will assign mentors to help guide and monitor the center’s progress. The group will also return to the institute this summer to help develop their skills and knowledge.

As of now there is no official opening date for Marywood’s THRT Campus Center and a location has not been established; however, the Office of Equity and Inclusion will coordinate any activities the center has planned.

Deckman said he believes the physical location will be less important than the work.

“The activities of the center are going to make up the center more than the physical space,” said Deckman.

Smith said he believes the true purpose of this center will be that of unity.

“Not only do they have the ability to say the things they want to say but it’s in a constructive and well formulated manner so that we can have open conversations without tearing down each other and furthering the divide,” Smith.