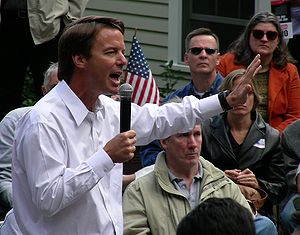 The day after the Florida Primary, Democratic presidential candidate John Edwards gave up his bid for the Democratic presidential nomination at the same place where it started, New Orleans’ 9th Ward. With the devastated city at his back, Edwards looked as if he was giving his concession speech in a third world, war-torn country.

Barack Obama and Hillary Clinton both complemented Edwards saying that he added a great dynamic to the Democratic race. His populist campaign, which focused on economic reform, brought a new element to the race by bringing the economic fairness issue to the forefront.

“We as citizens and government have a moral responsibility to each other,” said Edwards, speaking in front of supporters in the city’s flood-ravaged 9th Ward. It was a heartbreaking reminder that our own people are still living in ruin and shows how the issue of economic instability is a real and crucial problem that must be resolved.

“Our Democratic Party will make history. We will be strong, we will be unified, and with our convictions and a little backbone, we will take back the White House in November, and bring hope and opportunity to this country.”