Who's the Animal Now? 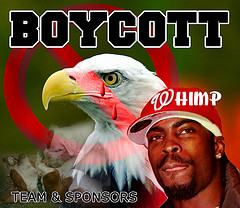 One leading story for 2007 was the investigation of Michael Vick. It was revealed that the quarterback for the Atlanta Falcons football team was running a dog-fighting operation on his property in Virginia.

He was also involved in executing dogs that did not perform well by shooting, hanging, drowning and/or electrocuting them.

After a long investigation, Mr. Vick pleaded guilty and was sentenced to 23 months in a federal prison and three years probation.

On November 19, 2007 he started his sentence early and traded in his football jersey for a jail uniform.

It’s shocking to believe that someone who has the great privilege to play in the NFL would participate in such a gruesome activity. He had so much going for him, and he just threw it all away.

Dog-fighting is a cruel, barbaric and illegal blood-sport. It is a severe form of cruelty, which involves torturing and killing innocent, helpless dogs.

A person who gets enjoyment and pleasure out of watching animals rip and tear each other apart is heartless and monstrous.

It is very disturbing, and it makes you wonder if someone is capable of violently torturing animals, what else are they capable of doing?

I personally believe Mr. Vick deserves more than 23 months in jail and all of his money should be donated to animal shelters all over the United States.

I sincerely hope that he will never be allowed to step on a football field ever again. This would be his ultimate punishment since football is the only thing he knows, besides dog-fighting.

The NFL needs to ban Mr. Vick and make everybody aware that his actions were unacceptable and disgraceful.

He is an awful role model and he has set a horrible example for his fans, and especially for aspiring athletes.

As U.S. Senator Robert Byrd said, “One is left wondering, who are the real animals? The creatures inside the ring or outside the ring?”

Dog-fighting is one of the most inhumane activities and Mr. Vick deserves the maximum punishment for partaking in this blood-sport.

Michael Vick has proven that he is the animal, not the pit bulls. He bred and trained them to fight other dogs; they were not born with the desire to kill.

We can not close our eyes to this type of abuse, no matter who is the abuser. Mr. Vick does not deserve any empathy, nor does he deserve a second chance.

The only good thing that came out of this case is that it has increased awareness about animal abuse especially dog-fighting.