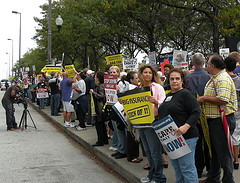 The late Senator and universal health care advocate Edward Kennedy once said, “the dream shall never die.” And for the 46 million Americans who went uninsured in 2008, it won’t. Health care reform, and universal coverage, will eventually be passed, whether under this Democratic president or another one. With each election cycle that passes, the health insurance industry, its lobbyists, and in the case of this go-round, the obstructionist Republican opposition, gets stronger, more powerful, and more adept at creating effective scare tactics. We need to pass health reform now.

Health care reform isn’t a government issue or a financial issue; it’s a human issue. Under this economy, many people are losing their jobs, and consequently, their insurance. Others are being denied insurance because of “pre-existing conditions.” Even though Pennsylvania’s unemployment rate is 8.5%, below the country’s rate of 9.6%, and even though its rate of uninsured people in 2008 was 10% in comparison with the national rate of 15.4%, that doesn’t mean Pennsylvanians are immune to this.

Take, for example, the story of Trisha Urban. She was pregnant when her husband, Andrew, 30, had to leave his job to take an internship as part of his doctoral program. As a result, he lost his insurance and Trisha had to work so they would have insurance. However, the insurance company considered her pregnancy a “pre-existing condition” and refused to cover her. Andrew was born with a heart condition that required him to see a cardiologist. Because neither of them had insurance to cover the cardiology appointments he had to miss one. In February, when Trisha’s water broke, she went to find Andrew to have him take her to the hospital. She found him collapsed from a heart attack. The only interaction her daughter, Cora, had with her father was at his funeral when she was placed in his casket.

The thought that a pregnancy is considered a pre-existing condition is disgusting. It is unthinkable that anyone would want to deny care to a pregnant woman and her unborn child. To a degree, I can relate with little Cora. My father, too, also died of a heart attack, but at least I was able to develop a relationship with my father before he passed away. Cora wasn’t so lucky. I was blessed with 20 years with my father, and she only had the few moments when she was placed in his casket.

I understand that a big concern for Republicans is the cost. A recent Time poll shows that at least 50% of those surveyed would be willing to pay more in federal taxes to provide universal coverage.

In addition, opponents have said that the reform would increase both spending and the deficit. However, the Congressional Budget Office has said that the bill put forth by Senate Finance Committee Chairman Max Baucus (D-Montana) would not increase the deficit, but reduce it. It would keep reducing the deficit over time and would cover 94% of legal residents. In fact, it would better reduce the deficit during the second half of a twenty-year period than the first.

Something popular with Democrats is the public option. This means that Americans could keep their current insurance plan or buy into a government-run program. Republicans argue that this would drive private insurers out of business, as the government programs would be cheaper. However, many people are satisfied with their current coverage, so if the public option plan is put into place, private insurers will be forced to keep costs down and expand coverage at the risk of losing customers.

Others are concerned with having health care “forced” upon them, saying the government making them buy health care is “unconstitutional.” They do not realize government is trying to help them. I can’t understand why they wouldn’t want help. If you can’t afford it on your own, would you rather go into massive debt from trying to pay for expensive treatments or even die than ask for help?

Perhaps a solution is to make health care available to everyone, but not require it. For whatever reason, people will resent being “taken care of” by government, so why push the issue? If they get health care, good; if they end up going into debt, they have no one to blame but themselves.

Mahatma Gandhi once said, “A nation’s greatness is measured by how it treats its weakest members.” What does that say about the United States?

An ideal situation would be to pass a bill with the public option. Otherwise, private insurers will not be held accountable for the “pre-existing condition” nonsense like what happened to Trisha Urban, or for keeping costs down. However, reform is reform, and we must get something passed, public option or not.

For more information on the bills currently under debate, or to clear up rumors about them or to read them for yourself, please visit http://senate.gov or http://thomas.loc.gov.