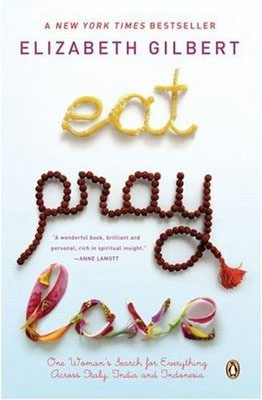 For the past decade or so, there’s been quite a shift in the way we think about how we feel.

The shift is toward positivity and psychologists, behavioral specialists, authors, and entrepreneurs have noticed. In fact, they’ve targeted and tailored happiness to be one of the most talked about things in pop culture, science, and business.

But what made you and I question happiness? Did we ever really think about it in the first place? What pushed us toward the happiness culture?

For the most people, that push to consider happiness came when Elizabeth Gilbert’s Eat, Pray, Love made it to the New York Times Best Sellers list.
Eat, Pray, Love came out at a very unique time in our lives and it may be one of the reasons why it’s been so successful.

Consider what was happening. It was 2006 and we were on the fringes of recession, global financial problems, and a housing market bubble burst. Social media began to grow and flourish. Corporate responsibility became a word in everyone’s vocabulary. As times got harder, the book got more popular. 2+2=4. A stressful, unhappy world will seek out more ways to be happy and in turn, buy books telling you what it takes to be happy.

But this book didn’t just get us to question our happiness. It also spawned multiple lines of merchandise, including branded candles and journals, Republic of Tea flavors, and travel packages. Happiness surged as a money maker because, let’s face it, who isn’t looking for happiness?

“In any year, more people use self-help than psychotherapy,” notes John C. Norcross, Ph.D., psychology professor at the University of Scranton in Pennsylvania and a coauthor of the Authoritative Guide to Self-Help Resources in Mental Health in a recent interview with MSNBC. We turn to solutions that we can easily purchase to achieve happiness. It’s private, it’s in vogue at the moment, and it’s easy.

As a result, we do yoga, Feng Shui our apartments, indulge in deep fried foods, light scented candles, and spend money, all in the pursuit of happiness. Now, more than ever, you’ll find more people questioning what truly makes them happy because the world around us is so chaotic. This quest, and the trend toward positivity, is known as the Happiness Movement.

Though the term has no real origin, the Happiness Movement describes our growing need to understand and achieve happiness. Granted, all human beings have the desire to be happy, but today, happiness has been boiled down to a science. Literally.

In 2008, a survey was conducted asking 240,000 people across the country to rate their contentment with their overall lives on a scale of one to ten. The participants, who ranged in age from 18 to 85, were asked questions about age and sex, current events, personal finances, health, and other factors that come into play concerning our overall happiness levels. The findings were unexpected.

According to the survey, people start out at age 18 feeling really good, but then head down a decline in overall happiness until about 50. Then, at that point, there’s a reversal. Happiness upticks and by the time people reached 85, they were even more satisfied with life than they were at 18.
So we see that age can be an indicator, but what about other things? Like money?

Well, in that case, take a look at the recent Princeton University study on happiness and money in TIME Magazine. According to TIME, the study determined that an annual salary of $75,000 is the money/happiness threshold for the average American.

Traditionally, it’s been thought that the more money a person make, the happier they feel. However, this study shows that any amount of money earned over $75,000 ceases to increase reported happiness. In short, people connect the quality of their lives more with how much money they make than the degree of happiness they feel. Remember, this is now scientifically proven. Scary.

That’s just the tip of the iceberg. Classes at top universities are centered around positive psychology. Millions of dollars are invested in happiness-boosting techniques in companies. Countless research studies on happiness and its place in our lives are being conducted and released. All on top of huge merchandise deals, multi-million dollar movies on happiness, and scented candles. It’s a lot to take in.

There are more than 50,000 self-help books in print and sales of these books are increasing yearly by about 8 percent, says Christine B. Whelan, Ph.D., visiting assistant professor of sociology at the University of Pittsburgh. It’s clear; people want their happiness and they’re getting it through the self-help industry’s Happiness Movement.

So what can one make of this? Well, for starters, expect to see more people looking to improve both their moods and lifestyles. The uptick in self-help approaches could indicate that the growing desire for happiness is actually motivating people to action.

This could be a good thing. Maybe we’ll see a world motivated toward a greater good. Maybe people will be nicer to each other. Maybe we’ll be healthier. Maybe happiness will become something woven in the fabric of our lives. Only time will tell.

For now, we’ll just have to wait and see what interpretations, methods, and causes of happiness come along. Who knows? Maybe in a few years we’ll all be part of the movement.