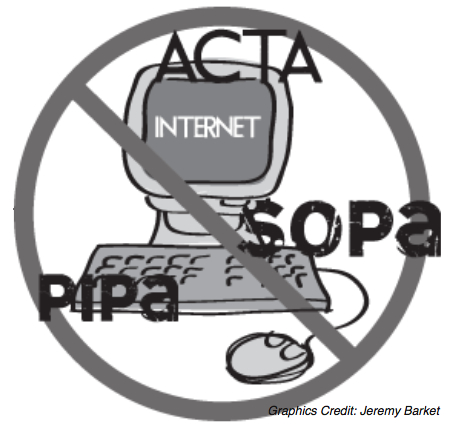 The fight for intellectual freedom has begun and its battleground is the Internet.

On January 19, the United States government shut down the popular file storage site, Megaupload. According to a graphic that appears when users access megaupload.com, “This domain name associated with the website Megaupload.com has been seized pursuant to an order issued by a U.S. District Court.” The many copyrighted works that were stored on Megaupload were deleted as well as legal files uploaded by other users.

In retaliation, the hacker group, “Anonymous,” brought down the Justice Department’s website and made it inaccessible for most of the day on Jan. 19.

The government’s attempts to police piracy on the Internet begins with the proposal of many acts that attempt to control sharing of copyrighted works online. However, the Stop Online Piracy Act (SOPA) and Protect Intellectual Property Act (PIPA) are the ones that are discussed most often in the news.

The House bill known as SOPA or “Stop Online Piracy Act,” is expected to expand the ability of U.S. law enforcement to fight online piracy of copyrighted intellectual property and the counterfeiting of intellectual goods. The Senate bill PIPA, short for the “Protect Intellectual Property Act” is a law proposed with the stated goal of giving the U.S. government and copyright holders the ability to stop access to websites dedicated to pirating, infringing, or altering intellectual property. Both bills are currently on hold, pending investigation. The current wording of the acts allows a media company making a claim to potentially shut down an entire website instead of simple removal of the offending file.

In response to these attempts to control the Internet, January 18 saw Wikipedia making itself inaccessible to users as it blacked out its pages in protest of SOPA and PIPA, and Tumblr gave users the opportunity to black out their own pages and display information on SOPA and PIPA as well as the ability for users to call their congressmen. That same day saw Twitter reporting that there were “2.4+ million SOPA-related Tweets, from 12 a.m. – 4 p.m. ET today.” Clearly this is an important topic to many people.

Black-march.com calls for users to boycott the media during the month of March in order to protest the media’s attempts to censor the Internet. The website asks people to “Wait the 4 weeks to buy [the CDs or DVDs] in April, see the film later, etc. Holding out for just 4 weeks will leave a gaping hole in the media and entertainment companies’ profits for the 1st quarter. An economic hit which will in turn be observed by governments worldwide as stocks and shares will blip from a large enough loss of incomes.”

Intellectual property such as music, movies, still photography, or writing is easily accessed by millions of users via large storage sites such as Megaupload without consent of the media’s creators. For Hollywood studios, music publishers and independent creators, piracy is threatening their livelihood. However, many social networking and online companies may not be able to withstand such restrictions to its users. Multi-billion dollar companies can become obsolete overnight if these two bills are passed.

Although the press release from The White House states that they do not support legislation that reduces freedom of expression, we must ask, how do you set those boundaries?

In a digital age where online companies such as Twitter, Facebook, Google, Wikipedia and Tumblr have millions of users, these two bills before Congress would force them to be online police and hold users responsible for online piracy. Many of these entities have displayed 24-hour campaigns where they have censored content on their pages or “gone dark” to allow users a first look at what they are in for if these bills are passed.

It is still unclear what boundaries and repercussions these bills will have on Internet users if they are passed. To many citizens, these bills are a restriction on their freedom of expression and a step to destroy the Internet altogether. Although we can clearly support the intentions of these bills to return the rights to the intellectual property owners, we can not support the collateral damage that will be inflicted despite how pure the intentions may be. People who use the Internet to store large personal files in file-sharing websites will lose their ability to access those files if a single user uploads a copyrighted video or image.

The government needs to think carefully about the consequences of passing this bill. The country is already in severe economic trouble, eliminating jobs created by these websites is only going to dig a deeper hole. There is also the practical end, does the government plan to eliminate jobs only to employ an Internet police force

These bills have good intentions, but they pose potentially problematic restrictions to free speech and creativity. The Internet is a place where people can express opinions freely. The fear that the government is monitoring their actions might lead to massive censorship of thoughts and, as it has been demonstrated, the Internet is quickly becoming a way for citizens to become involved in their government. Even quoting a line of copyrighted text could potentially land the user in jail. Copyright holders already have the ability to request removal of copyrighted media from websites. Why do they need these further legal protections?

Clearly, the people passing these bills need to think more seriously about how these laws will be put into practice as well as how the laws will impact our economy, our lives and most importantly, our freedom.