Our Opinion: Two giants in media fall, one will be missed 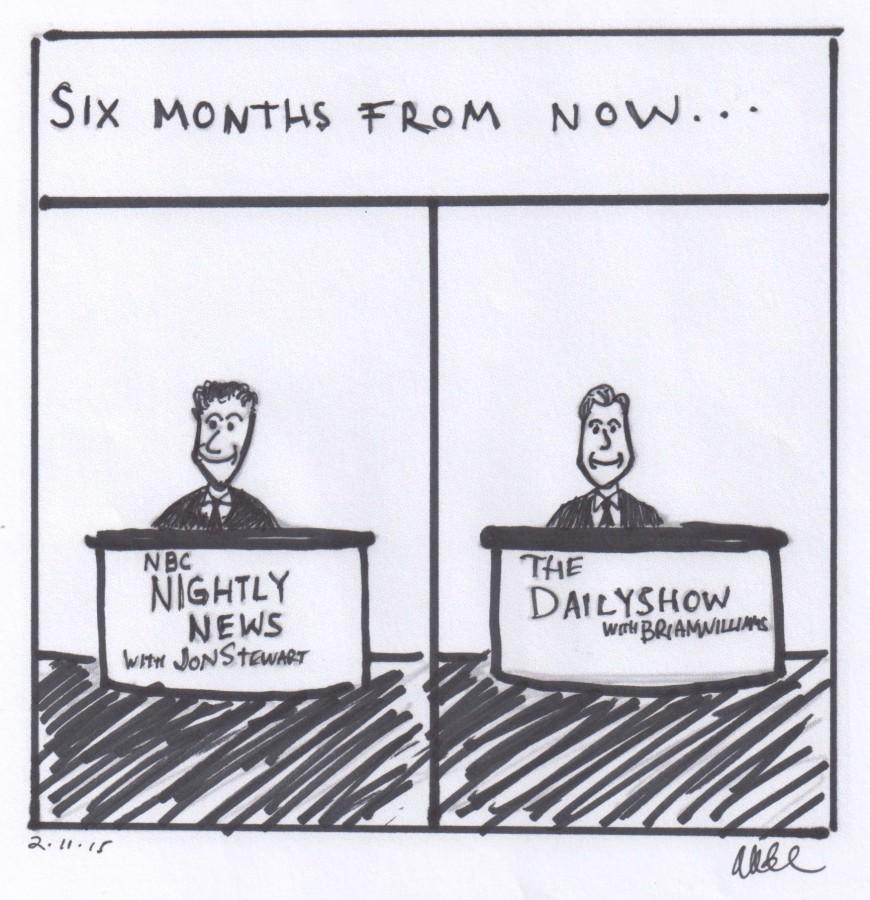 As a result of his bending of the truth in regards to his experiences in Iraq, Brian Williams was suspended for six months from his position as the main anchor on the NBC Nightly News.

In one of those strange quirks of timing, Jon Stewart announced on the same night that he would be leaving his longtime position at Comedy Central’s “The Daily Show,” some time later this year.

To put this another way, on Feb. 10, Americans found out that one man who made fun of the news by stylizing himself as an anchor and one man who was once a great anchor would both be leaving their jobs.

Jon Stewart is not a journalist. Stewart made his living by turning the news into a farce for almost 17 years.
Brian Williams is not a journalist. While he was once widely respected, perhaps even a great journalist at one point, since the revelation of his inflated story, he has only shown America that he is no longer a journalist. A journalist is impartial, unbiased, and, above all things, truthful.

One of the most important aspects of a journalist’s training is that the story is not about the reporter. But Williams tried to make his stories about him, in some sort of quixotic quest for personal glory.

This kind of action is destined for failure. As has been shown time and time again when journalists lie to make stories better, someone will eventually figure it out, and there will be very harsh consequences.

So why did Williams lie? That’s tough to say. For years, Williams has appeared on a number of comedies and talk shows such as “30 Rock” and “The Tonight Show.” Perhaps he was feeling increased pressure to entertain–to give audiences what they want–and that led him to sensationalize his story.

But why does society chastise people like Williams, but adore people like Jon Stewart? Both of them have sold fiction to the American people–albeit, with Stewart doing so nightly, and with Williams only doing so in one case he has admitted to, while accusations swirl around other possible lies.

The difference is this: Stewart’s fictions say something about American society, from its government to its people. Since he often and obviously operates in character, the public understands that Stewart’s fictions are only satire, and satire is an important way of keeping society honest as well as entertained.

Maybe this was something Williams aspired to?

As one of the most fierce and biting satirists of our time, Stewart will most surely be missed. In fact, Stewart’s openness about the satirical nature of his show has struck a chord with Americans. According to the Columbia Journalism Review, he was rated as the most trustworthy reporter in the United States as recently as 2009, winning out over Katie Couric, Charlie Gibson, and, of course, Brian Williams. This is despite the fact that Stewart is a comedian, and often emphasizes that he is not, in fact, a journalist.

Perhaps this is the reason that Williams lied. In a media landscape where a comedian is a more trusted “journalist” than a newsman with actual training, and where, according to the Pew Research Center, NBC Nightly News was the only network news losing viewers in 2013, maybe Williams felt as though his stories needed to be more entertaining to compete.

Williams’ lies are nothing more than ego-stroking and self-endorsement. He may have been a valued reporter once, but he has lost all sense of credibility. Whether or not he will be missed is up to the viewer