Pipeline veto is not a clear victory 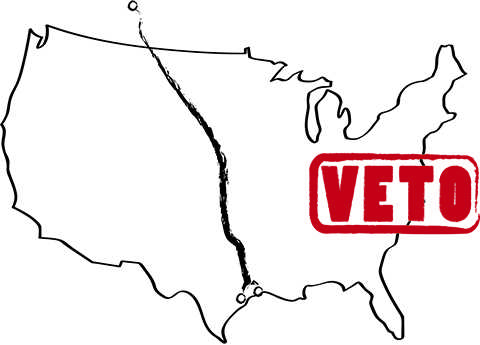 Late last month, President Obama made good on one of his promises: vetoing the proposed fourth stage of the Keystone XL Pipeline, which carries oil from Canada through the United States.

Unless there is a two-thirds majority in both houses to overturn the veto–and who really thinks the current Congress could agree that much on anything?–there is a fairly good chance that the bill is dead.

But is that really good news for anyone? That’s hard to say.

The main issue that led to the veto appears to have been the potential environmental impact. According to Bloomberg Business, much of the protests against the pipeline come from the Sand Hills, a region of Nebraska through which the pipeline would pass if it were constructed. The protests from this “environmentally sensitive” region caused President Obama to reject the pipeline back in 2012.

The pipeline was planned to be rerouted through other areas, but environmentalist group Friends of the Earth claims that the pipeline would still be detrimental to the environment, leading to pollution of water and destruction of forests.

But while those against the Keystone XL Pipeline decry the destruction of the environment, proponents for it prattle on about its job creation.

Last fall, Russ Girling, the CEO of the company that owns the Keystone XL Pipeline, TransCanada, claimed that the pipeline would create 42,000 “ongoing, enduring” jobs.

According to Politifact, though, this statement gets a rating of “False” on their “Truth-O-Meter,” pointing to a State Department report which claimed that 42,000 jobs would indeed be created, but not all of them would be permanent positions.

But even if not all of these jobs are permanent, jobs are jobs, right? That’s what the GOP is saying. Besides, it will help gut Americans off foreign oil. And who wouldn’t want cheaper gas that doesn’t need to come from the Middle East?

But should cheap gas come at the price of the environment?

And this is why debates like this rage on and on in Washington. There is no clear, decisive right or wrong answer to any topic. Job creation and energy independence seem like good things at face value, and so does taking care of the environment. But if those things are mutually exclusive, the decision comes down to personal ideology.

President Obama’s veto certainly appears to be a victory for environmentalists, but it is impossible to tell right now if the right decision was made. When there is no clear right or wrong answer, the only answer is to make a choice and hope for the best.