He said, she said: Is the new AS/RS worth it? 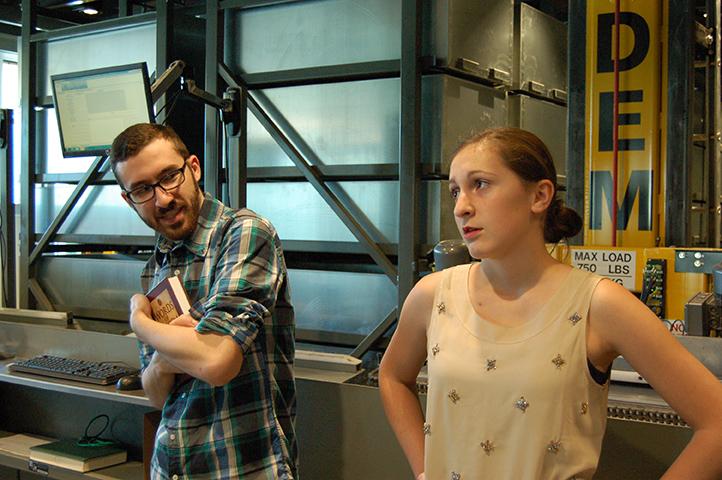 He said: Give me back my book shelves, please

We spent $2 million too much.

The shiny toy of our new Learning Commons, the Automated Storage and Retrieval System is a true boondoggle. It looks really important, but it is never going to do much for us.

All of the money spent on this system could have been spent on so much else worthwhile: improved computers or additional labs throughout campus; repairs to roads, parking lots, and buildings; or our campus’ Wi-Fi and portal systems; air conditioning for LAC classrooms. Any one of these things surely would be more useful than this book retrieval system is.

Joseph X. Garvey, vice president for business affairs and treasurer, said himself to The Wood Word that it “probably will not be as heavily used as libraries in the past.” All I know is that if I went out and bought something for as much as we paid for the AS/RS and then told people I wouldn’t use it all that much, I’d certainly feel foolish.

Better yet, I would rather have some of that $2 million in my pocket. The newest financial aid reward, the sibling award, is offered to the second member of the same family when two or more dependents are enrolled at Marywood University as full-time, undergraduate students during the same semesters, or if the other sibling has already entered graduate school, as stated on the financial aid webpage. This only became effective in Fall 2015 in honor of Marywood’s Centennial celebration; with that extra funding many of us could have had significant breaks in tuition.

And even if the Learning Commons’ version of HAL 9000 is utilized, how inconvenient is it now to take out a book? It takes several minutes for a book to get from its inhumane storage crate to my hand. What was wrong with the old method of going online, finding the book’s location, picking it up, saying “no, I guess I don’t need this,” then putting it back and walking away. Or I could have just put it back in the sorting bin. I can’t imagine the chaos of putting a book in the wrong bin now.

There was a certain thrill to gliding across dusty old bookcases and shelves. Sure, times have changed, but I figure I can dart my eyes through covers quicker than a computerized arm can retrieve my book. So while the AS/RS is here to stay, I’ll be staying away until I really need it.

And when I do need it, it’d better work like a $2 million dream.

She said: AS/RS is the best options for books

Save the books. Seriously, it needs to happen. And it can happen with the help of Marywood’s Automated Storage and Retrieval System (AS/RS).

This system relies on a robotic arm to retrieve a steel bin full of books. Not only is it fast, but it also keeps the books safe and allows for a more efficient library.

Many schools and businesses, like Marywood, have adopted the AS/RS systems, and the benefits have already been proven.

According to California State University Northridge, the Oviatt Library in Northridge, California suffered an earthquake in January of 1994. During the quake, “almost 100 percent of the library’s open shelf collection was dumped on the floor [but] not one book in the AS/RS was damaged.”

No boxes were lost, and no papers were torn. If some type of natural disaster were to occur on campus, the books would stay cozy and unharmed in their steel bins.

These cozy steel bins don’t just look like something from Warehouse 13. They save space, which means there’s room for more books. Who doesn’t want more books?

UNARCO, a company familiar with the installation of AS/RS systems, further explained the reason for the increased space: “The narrow aisles in an automated storage system [reduce] a typical 12’ aisle… to a narrow 7’ aisle. This creates 40 percent more space.”

Although putting every book into a bin eliminates the ability to physically browse the collection for the perfect read, it allows for more content.

The increased capacity and reduced space creates a larger and more enriched learning environment, which I would argue is a fair trade off for the scent of decaying paper in a library.

The greater amount of content available, combined with the glamour of the new AS/RS system, is something that will keep students on campus interested.

I admit that the first thing I did when I walked into the Learning Commons was walk over to the rows of gleaming silver cases and watch the “super cool” robotic arm deliver a box packed with books. This is the future. We can be with it or against it. To be against it is to be against progress.