He said, she said: Should political parties exist? 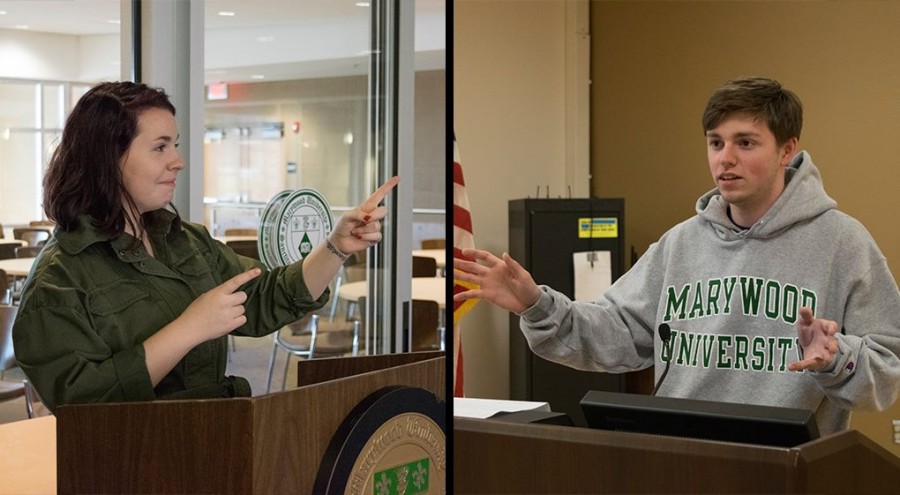 The United States’ political system is a mess. For years, the only parties that really mattered have been the Democratic and Republican parties. The current Congress is split 300-232 in favor of the Republicans. There are currently only two independent party members of Congress, one of which is Bernie Sanders.

Here in Pennsylvania, primary elections are closed, meaning only registered Democrats and Republicans can vote for their respective parties’ candidates. Non-establishment voters like myself, a registered Libertarian, are left out of the fun until November; at this point, I have no say in who I want to be able to vote for later this year.

What the United States government really needs is a major realignment. Essentially, that means getting rid of the two-party system. A revamp of the system would call for a few things: allowing third-party candidates to participate in debates, which consequently gives them more of a voice and a way to reach voters; allowing third-party voters to vote in primaries in each state, which would take away the Democrats vs. Republican format; and changing the system to a candidate one vs. candidate two format.

Rather than divide the nation by parties, voters should align by major issues. Whichever candidate one majority of voters favors in terms of one ideology gets that side of the nomination, and a different candidate that appeals to the other majority of voters gets the other side. This would give third-party candidates —Libertarian, Socialist, Green Party, and Independent—a fighting chance in the elections.

Sanders’ campaign for the Democratic nomination is supported on FeelTheBern.org. The site, unaffiliated with Sanders himself, states that, “since 1852 only Republican or Democratic nominees have been elected to the highest office in the land.” This being the case, the only logical way for Sanders to gain any ground was to run as a Democrat.

There are two other candidates across the political spectrum who have stepped outside of their party lines.

Although he dropped out after losing the Iowa caucuses, Republican Rand Paul has been known to lean more towards a Libertarian take on politics. The eyesore we know as Donald Trump, on the other hand, is a wild card.

The Republican National Convention doesn’t want Trump to be its nominee. Of course, this makes sense, since Trump is hardly a Republican. Sure, Trump is for lenient gun laws and against full-on marriage equality, much like most conservative politicians. However, Trump’s hardcore anti-immigration stance, “tax-the-rich” approval and even minor defense of a single-payer health care system stray from the status quo.

This outrageous candidate would probably be held back by a multi-party system. No, Trump probably isn’t running for the GOP just because he thinks Republican voters are gullible, but he seems to be on to something. His stances are pandering to a very angry group of voters who are breaking from Republican party norms. Candidates who break party molds, in one way or another, need a better system to support them.

Expanding the political game to more than two major parties would allow for the candidates who aren’t just yelling insults at their opponents to gain some traction.

Republicans are divided between the numerous candidates, and though the number of remaining candidates decreases after every primary, it is not looking good. The Democrats are split nearly in two between Hillary and Bernie. If the government opened up the elections and the political system as a whole to include the Libertarians, Socialists and Independents, rather than making them pick a side, voters would really stick to the candidates they want.

She said: No Parties!

The important thing to remember when considering an argument to get rid of political parties is that political ideals will still exist. The issue is, as we have seen, people put political ideals into two camps: democratic and republican. Political beliefs lie on a spectrum in which people can fall anywhere in between traditional party lines.

Categorizing voters into camps of beliefs only alienates them and is proving to have a negative affect on registered voters actually showing up at the polls.

According to Pew Research Center, voter turnout in the United States falls short compared the other developed countries in the world. Only 53.6 percent of Americans voted in 2012, despite 83 percent being registered to vote.

If we take an honest look at this presidential election, two of the frontrunners, both in the Democratic party and the Republican party, aren’t actually true representations of what the parties stand for. They just hold vague political ideals that somewhat fall into the democratic and republican camps.

Bernie Sanders, who is is an Independent Senator from Vermont, switched parties to run for president. Why? As Alex said, according to FeeltheBern.org, “since 1852 only Republican or Democratic nominees have been elected to the highest office in the land.”

So, instead of standing with the party he successfully won the Vermont seat with, Sanders just switched parties in order to secure a nomination. While Alex wants to argue that means we need more parties, it speaks to the need to abolish political parties.

Sanders was able to secure a spot in Congress as an independent, so why can’t the same be said for president? In fact, Sanders often says he and the millennials who support him are starting a political revolution- but he put himself back in a broken system that desperately needs fixing.

Alex believes the solution to this problem is to have more political parties, but we already have five.

According to insidegov.com, there are more five political parties currently active in the United States: the Republican party, the Democratic party, the Libertarian party, the Green party and the Constitution party. So, we have the parties, but the problem is apathetic voters who only look to Democrats and Republicans and not the individual candidate.

The way to get ourselves out of the mess of a divided Congress, government and people is to abolish political parties and start looking at individual politicians and overarching political ideals than party structure.

This may seem like an impossible goal, but it is very possible and looking at the condition the two party system is in currently, it is the more favorable option. In addition, with the changing political landscape of younger voters–particularly millennials, voters are already looking at candidates for their individual beliefs rather than just blindly voting by party.

When electing a president, the United States would still have a primary system, only voters wouldn’t be choosing a Democrat and Republican nominee, they would just be choosing the two most favorable options to run for president, or the two with the most amount of votes.

The argument can be made that parties would just naturally form at that point but as the younger generations start coming of voting age in this system, the party system will start to fade away. In a no party system, it is very possible to get two nominees who may fall in the same area of the political spectrum running for office, and that’s fine. We could finally have a system and candidates that reflect the political landscape of the United States.