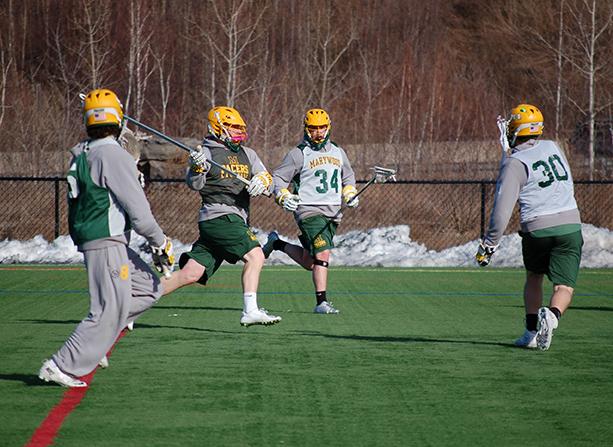 The Marywood Pacers men’s and women’s lacrosse programs have big goals for the upcoming season.

Last season the men’s team finished the season with a 10-9 record, including a 5-1 mark in the Colonial States Athletic Conference (CSAC). The team reached the CSAC championship game, losing to Cabrini College.

The team qualified for the Eastern College Athletic Conference (ECAC) Mid Atlantic Region Tournament, but was knocked out in the first round by Marymount University.

Heading this year’s team as interim head coach is Tyler Perrelle, who was an assistant coach of last year’s team.

Nine seniors form the leadership core of this year’s team. One of the nine seniors, Brandon Terlizzi, a marketing major, believes the team can reach its goals.

“Some goals for this season are to win a CSAC championship and improve our play in the first quarter of games, which has historically been lacking. And to also improve our practice morale through more intensity and competition at practice,” said Terlizzi.

The women’s lacrosse team finished last season with a 9-9 record. The Lady Pacers made it to the CSAC playoff, reaching the semifinals before losing to Neumann University.

Head Coach Katie Tutak enters her second year, heading a unit with only one senior, and five juniors. The rest of the fourteen players are underclassmen.

Stacy Griffing, junior interior architecture and design major, believes that the number of underclassmen is not a weakness, but rather a strength for the team.

“The strength of our team this year is the number of people on team. This year we have around 20 players, eleven of them being freshmen. The past three years that I have been on this team, we struggled with having one or no subs. In the past we have had to play teams man-down because we did not have enough people to fill the field,” said Griffing.

Those eleven freshmen Griffing mentioned have a key role on the team.

“We have eleven freshmen this year that bring talents in all different areas on the field. They all hold a huge role on our team this year and being successful,” Griffing said.

Dana Grossjung, senior interior architecture and design major, believes this team is poised for a great season, despite the lack of upperclassmen.

“We lost some extremely talented seniors last year and that has left large sports to be filled. It’s definitely an obstacle that we have to overcome, but it also allows the opportunity for others to step up and fill in those spots. I believe this group of underclassmen has already proven that they are more than capable,” said Grossjung.

Both Grossjung and Griffing think this team has the ability to win the CSAC championship, thanks in part to the depth they have on this year’s team.

Players on both men’s and women’s lacrosse teams say they are geared up and ready to take on this upcoming spring season, expecting to be playing into early May and looking to hoist the CSAC championship trophy.