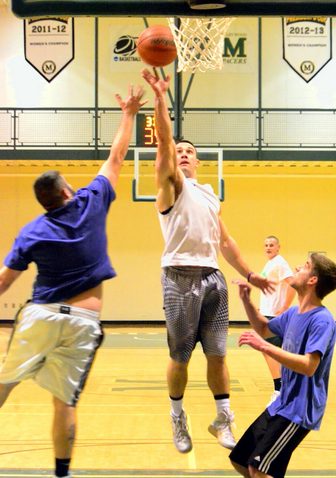 The basketball regular season and postseason may be over for both the men’s and women’s teams, but the intramural season has just begun.

Nicole Malloy is now hard at work recruiting students for a wide range of intramural sports. The most “consistently” popular of those sports is basketball, she said.

Malloy, coordinator of Intramurals and Recreation, believes there are a number of reasons why basketball brings the most interest from students. This year, however, participation is down dramatically.
“Typically our numbers are very good for men’s basketball averaging between 100 to 120 students, but this year we are actually down a little bit,” said Malloy.

The number of signups this year is roughly only 40 students. In responding to why she thought the numbers were down by this much, Malloy said there is not a single cause. “A lack of facilities, weather and reaching students are our biggest challenges,” she noted.

Malloy pointed specifically to the loss of South Campus as an issue for intramurals. Since Marywood only has one gym, Malloy said, “It is difficult to reserve the gym with all the other sports and programs happening.”

Despite the facility limitations, the biggest challenge Malloy faces is trying to get students involved. “I think the biggest improvement we need to make is finding a way to reach the students. Advertising needs to improve drastically,” she said.

Zachary Lewis, a senior Exercise Science major and a member of the track and field team, has been working as an assistant to Malloy helping her with intramural sports.

Lewis echoed Malloy’s comments about finding ways to reach students, saying, “I feel like emails and flyers only go so far. I feel like we need to go out and talk to people in person to try and get them to sign up.”

Even with all these challenges, Malloy continues to encourage students to join, pointing out that the primary reason is to socialize with other people.

“You can come to a program and you might connect with a person you would have otherwise never seen on campus,” explained Malloy.

Malloy also said that playing an intramural sport is a “great stress relief.” Any intramural program creates time to get away from the grind of classes, she said, adding that intramurals are just good for one’s well being.

Basketball, especially, is a sport in which a person is constantly moving: running, dribbling and passing, screening other players or shooting. Malloy says that basketball fits the perfect mold for an intramural.

“I think it is one of those traditional programs that people have played forever, so even if you are not the best at it, you still have a basic understanding of it,” said Malloy.

This intramural basketball program features five teams with about seven to eight players on each team. The games are tentatively scheduled for Monday and Tuesday nights from 8:30 p.m. to 10:30 p.m. But, even if students missed the signups, Malloy still encourages people to attend. “Come watch, check it out, and do not hesitate to ask come in and ask questions,” she said.

Lewis mirrored those comments when asked what he’d say to somebody who has not tried out intramurals yet. “Try out new things,” he said. “You might even find a sport or activity that you never thought you would be interested in, but you come to love it or become really good at it.”

Malloy capped off her comments by saying that getting involved with intramurals can enhance a student’s college experience.

“It is a great social opportunity. I think the more you expose yourself and the more you get out there, the better your overall college experience will be,” she said.