Day in the Life of Student Athlete: Tiffany Brznek 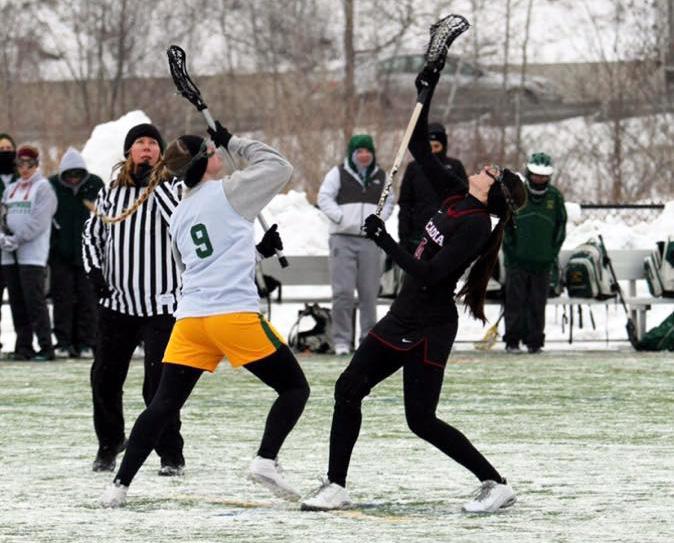 Tiffany Brznek facing an opponent during a home game against Arcadia University in 16-7 loss.

Spring has not yet entirely sprung but the Marywood women’s lacrosse team is in full swing. Freshman art therapy major Tiffany Brznek, from Abbottstown, Pa., has been playing lacrosse for six years and is an essential player on Marywood’s team.

“I was in 7th grade when I started playing lacrosse,” said Brznek. “My cousin was a college player and I saw one of her games. After seeing her play, I was inspired to play.”

There were a lot of factors that went into Brznek’s decision to come to Marywood.

“I knew I wanted to play lacrosse and major in art therapy,” said Brznek. “There aren’t many schools that have art therapy, so Marywood was definitely an option.”

After speaking with past lacrosse players and going on a tour of Marywood with Coach Katherine Tutak, Brznek knew that she wanted to take her talents to Marywood.

“A past member of the team was an art therapy major, which made me confident in my own major,” said Brznek. “Everyone was so sweet and kind, so I knew I wanted to play on the team.”

While lacrosse is a spring sport, the team participated in Fall Ball, an intercollegiate pre-season event where various teams scrimmage against one another.

“Not everyone on the team was at Fall Ball, but it was good being with the members who were playing,” said Brznek. “Fall Ball was a great opportunity to know some of the other girls and become friends before the actual season began.”

Now that the season has begun, Brznek and her teammates spend more time together. With practices every day and games at least once a week, the members of the women’s lacrosse team have the opportunity to know each other well.

“Our practices are usually two hours long,” said Brznek. “We have to schedule our classes so we’re done before 4 p.m. in order for us to practice. Nothing gets in the way of practice; if it’s raining, we practice in the gym instead of the turf field. Sometimes we’ll have a 6 a.m. practice if we really can’t get the field or gym and once we even had a Zumba practice instead of going on the field.”

Brznek is very busy off the field as well.

“I usually wake up at 7:45 each morning to get ready for my 9 a.m. class,” said Brznek. “My roommates and I like to go down to Connections together and get breakfast.”

“Tiffany does her own thing so I don’t really run into her so much,” said Weeks. “We all have our own schedules and we get along well with each other.”

“She is very independent,” said Whitman. “Tiffany is very creative and artistic. She does her own thing and doesn’t care if other people judge her.”

In addition to balancing time with her teammates and roommates, Brznek also commits herself to her sorority, Zeta Phi Delta.

“Being a part of Zeta is so much fun,” said Brznek. “It is sad when I have to miss events due to lacrosse, but the girls in Zeta understand that lacrosse comes first. All the girls in the sorority are very understanding and supportive of their student athletes.”

“Ashley is so supportive,” said Brznek. “Since we’re the same major, she gives me great advice about our field. She inspires me and it is wonderful to have that support.”

“Tiffany is such a creative and funny person,” said Logar. “She is so sweet and can create the most beautiful pieces of artwork that anyone would love to have in their home.”

When it comes to games, Brznek and her teammates take things seriously but not stiffly.

“We have a warm-up CD that we play on the field at home games or on the bus for away games,” said Brznek. “We also have a saying that we all believe in. It’s ‘Rooted in the past, fighting for the future.’ We’re proud of the team’s past accomplishments and we want to achieve even more.”

Another team motivator is the acronym FAB which stands for “Fight, Achieve, Believe.” This motivates the girls and inspires them to perform their best.

“My team is a second family,” said Brznek. “There are no cliques. We are here to support each other, be friends, and play the sport we all love.”