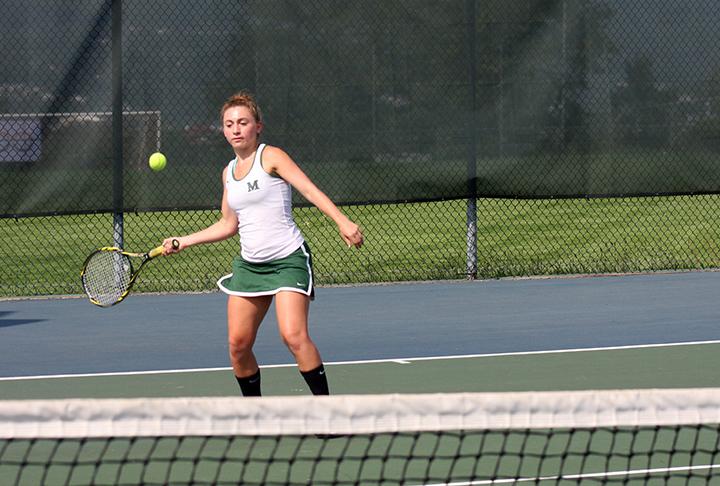 Women’s tennis at Marywood is coming off back-to-back 11-win seasons, and the 2015 team is continuing that trend, winning 10 of its first 12 matches. The team also only lost two games in Colonial States Athletic Conference (CSAC) play thus far.

However, this is not the first time that women’s tennis at Marywood has a nearly flawless season. The program has been consistently strong for several years.

The last time the team had a losing record (7-8) was the 2009 season. Ever since that year, the Pacers have been at the top of the CSAC, finishing each campaign in the top three.

Aimee Wentzell, who started at Marywood in 2014 as the assistant women’s tennis coach, was elevated to the head coaching post this May.

Wentzell credits the continued success of the team to its work ethic. “They are all just really devoted to what they do. When they are out here they really work hard. They’re athletes. They know how to fight and they know how to fight through a match even if they might not have the best strokes that day,” said Wentzell.

Additionally, she teaches her players how to persevere through all the preseason practices. “It’s a lot of repetitive drills, 20 in a row one way, 20 in a row the other way. That’s how we pretty much spend the first week and they hate it. But, by the end of the week, they can do it pretty quickly,” said Wentzell.

However, Wentzell said she knew that success was not going to come easy this year. No matter how many practices the team had, it could not make up the loss of key personnel. “It was tough because we lost quite a few starters. We only have two returning starters from last year leaving us with six new faces,” Wentzell said.

One of those new faces is Emily Zarrilli, a freshman speech pathology major, who said that because the team is smaller, it is easier to build chemistry. “This year we’re really close. We’re a small team so we do a lot of things together and become better teammates because of it,” said Zarrilli.

Junior Avery McCall, social work major, echoed Zarrilli’s comments. “I feel like we are closer to each other than we were last year. We are more of a team.”

Wentzell appreciates the tight relationship with the team, but also knows that the last stretch is going to be tough. She is relying heavily on McCall to maintain the momentum. “Avery was our number three last year. She is our number one this year and she’s gotten better. She had a strong season last year and she’s going to be tough to beat when she finds her comfort zone in that number one spot,” said Wentzell.

Currently, the Pacers are red hot, winning nine of their last 10 matches. But, Wentzell understands that the team must stay focused in order to keep up with the rest of the CSAC. “Focusing on every match as its own match is very important. This team is really good at putting the same emphasis on each match no matter who the opponent is. You know they’re ready for it.”

“I want us to win. I want us to win it all. But, having so many freshmen out here for the first year I really see it as a season to grow from. We get two of our returners back next year that are abroad this year so I think we could win. I think we have the potential to win,” said Wentzell.