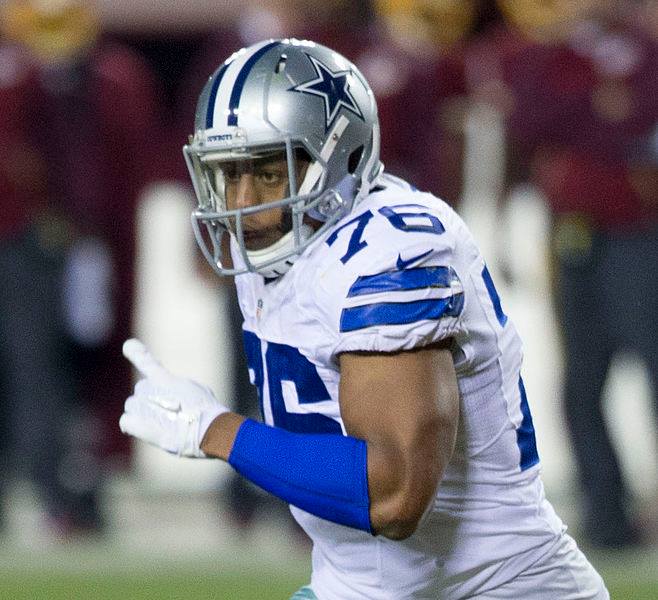 Today, nearly a year and a half after the verdict, Hardy just finished a suspension-shortened season in the National Football League (NFL). To understand how Hardy got back into the league, we must go back to where it all began.

The original incident happened on May 13, 2014. According to the actual State v. Hardy testimony on July 15, 2014, Hardy and his then-girlfriend, Nicole Holder, got into a domestic dispute. Holder claimed that Hardy, after a night of drinking, assaulted her.

Holder testified that Hardy badly attacked her, “He (Hardy) got on top of me, used both of his hands, and he strangled me.” Holder also said that Hardy “looked me in the eyes and he told me he was going to kill me,” while putting his hands around her neck.

It’s important to note that Hardy legally obtained the assault weapons found in his possession.  Receipts for the guns were turned over to police.

You can read the full testimony from both Greg Hardy and Nicole Holder in the link above.

Hardy and his defense attorney Chris Fialko vehemently denied Holder’s testimony. In fact, Hardy claimed that he was the victim of the alleged assault and that the marks on Holder’s back were self-inflicted.

County Judge Rebecca Thorne-Tin did not buy Hardy’s defense and sentenced him to 18 months probation. The case was eventually dropped because Holder could not be contacted and reached a civil suit agreement with Hardy.

After the dismissal, Hardy was taken off the NFL’s exempt list. Shorty after that, the Dallas Cowboys signed Hardy to a one year deal, knowing the potential for suspension. The NFL gave Hardy a 10-game suspension that was reduced on appeal to a four-game suspension for the start of the 2015 season.

Hardy now starts for Dallas Cowboys, known for years as “America’s Team,” when in fact he should never be allowed to play football again.

Even more troubling than Hardy starting for an NFL team is the way he was welcomed back with open arms. The most outlandish comment made about Hardy was by Dallas Cowboy owner, Jerry Jones.

In an article by the New England Sports Network, a postgame press conference was held and Jones said that Hardy is a leader.

. “He’s, of course, one of the real leaders on this team and he earns it with respect from all of his teammates and that’s the kind of thing that inspires a football team.”

How can a man that was convicted of abusing a woman be looked at as a leader in any workplace environment?

Unfortunately, that is the environment the NFL has allowed with the lack of leadership from current Commissioner Rodger Goodell.

Goodell is not only inconsistent with the length of his punishments, but up until the Ray Rice scandal back in 2014, the league did not have a domestic violence policy.

It was only until elevator footage of Rice striking his then-fiancée, knocking her unconscious, that Goodell stepped in to finally make necessary changes.

Under the newly implemented rules, a player who commits an act of domestic violence would be suspended for six games without pay. For a second offense, the league would ban that player for life. A player would not necessarily have to be convicted to incur these penalties, but the event itself would be judged on its own merits.

However, when the Greg Hardy situation arouse, this policy was an epic failure for all parties involved. Originally, Goodell went above and beyond the six-game suspension by suspending Hardy for 10 games.

Instead of seeing this as progress towards removing domestic violence from the league, the NFL Players Association (NFLPA) appealed that ruling.

With the help of the NLFPA, Hardy got his suspension reduced to just four games.

I understand that the NFLPA is doing its job by protecting the players, but this is an issue far bigger than the NFL shield.

Hardy came back to the Cowboys and showed no remorse for his actions. In one of the first interviews back with the team Hardy said he would come out “guns-blazing,” a clear reference to the incident itself or just an incredibly bad choice of words.

Hardy went on to have a sub-par season with the 4-12 Cowboys full of minor sideline incidents with coaches and more questionable comments in interviews.

But, in the eyes of Jerry Jones and the Dallas Cowboy organization, this animalistic, shallow, unapologetic fraud is a “leader.”

It’s time for the NFL to take domestic violence more seriously. Enough talk about relocation to major markets like Los Angeles, the coaching carousel, or who is going to be a five tool player coming out of the draft class.

I understand that the NFL is a profitable business and I am not condemning them for that. But I will not take its initiatives, commercials or public relations moves against domestic violence seriously until they do.

It’s time that the NFL changes their tone on victims of domestic violence. It’s time for the suits making six to seven figures in the New York headquarters to wake up.