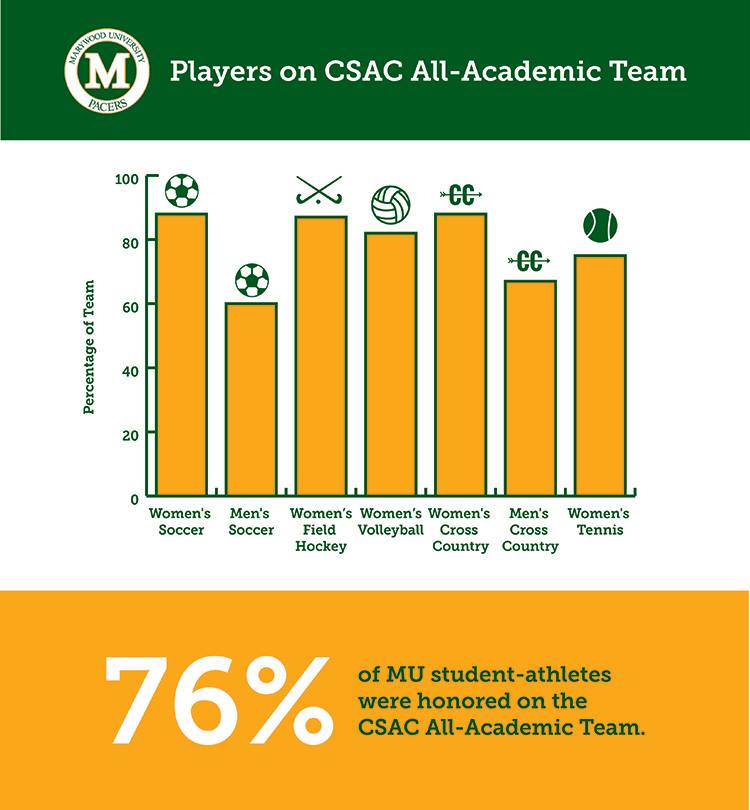 Marywood’s student-athletes proved last semester that they value their academics just as much as their athletics.

Seventy-eight Pacer student-athletes were named members of The Colonial States Athletic Conference (CSAC) Fall 2015 All-Academic Team, the most of any of the 12 institutions in the conference.

According to a CSAC news release, student-athletes had to earn a 3.20 GPA or higher in the Fall 2015 semester to make the All-Academic Team. They also had to use a full season of eligibility in accordance with NCAA regulations.

Dr. Mary Jo Gunning, director of athletics and recreation, said that while she believes athletics are important, students must prioritize and focus on why they are at Marywood in the first place.

“We have the good fortune to truly believe that you’re an individual first, you’re a student second, and you’re an athlete third,” said Dr. Gunning. “And therefore, a major thrust of our mission is finding appropriate bounds between academics and athletics and prioritizing academics.”

Four Marywood teams also received Team Academic Awards for having the highest grade point averages among conference institutions for their sports. These teams were Women’s Cross Country, who tied with Immaculata University with a 3.58; Women’s Field Hockey with a 3.63; Women’s Soccer with a 3.54; and Women’s Volleyball with a 3.41.

“Honestly, I think that we have really academically motivated people on our team,” said Manning. “I think a lot of it was their individual efforts, but we set really high goals for them, for their academic success.”

According to Manning, GPA goals are set for each player at the beginning of the season. Freshmen attend team study hours, and many of the upperclassmen athletes do as well.

Daniel Hull, a senior business management and marketing major, is a member of both the Pacers soccer and baseball teams and one of the 78 honorees.

“It’s kind of special,” said Hull. “I’ve never been the brainiac of my family, it’s always been my older brother. To be on it definitely shows I’m doing a lot better in my studies, and it makes my parents proud too to see that.”