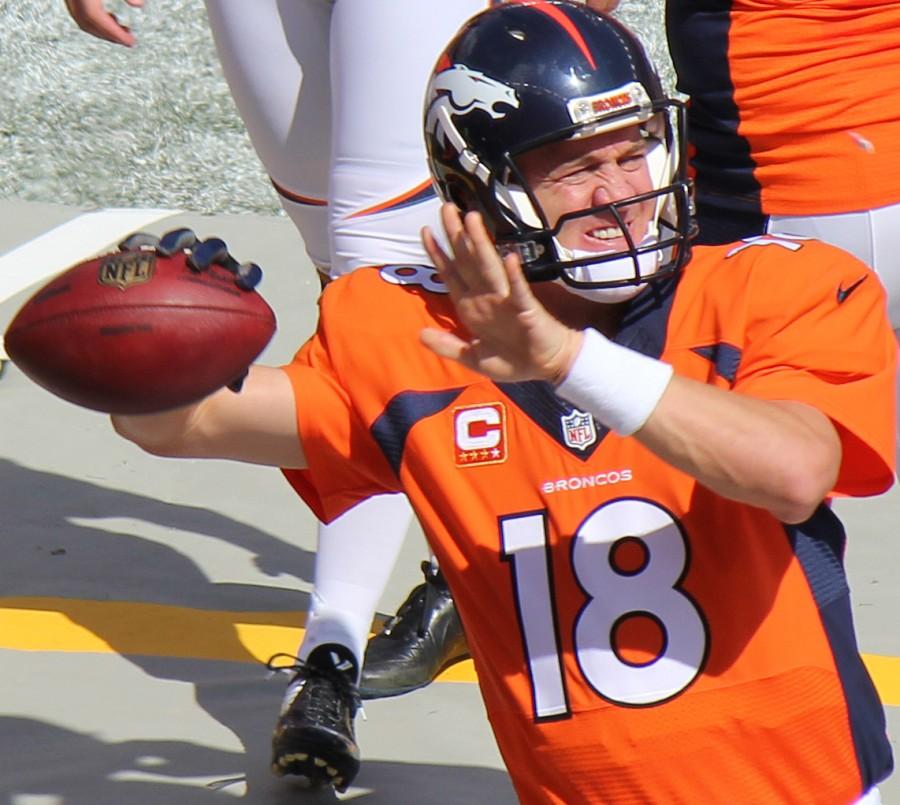 Photo by Jeffrey Beall, distributed under a CC-BY-SA-3.0 license, via Wikimedia Commons.

Peyton Manning is riding off into that beautiful Colorado sunset.

On Monday, Manning officially retired from the National Football League in an emotional press conference in which he thanked his teammates, coaches, family, and fans with the same prepared, meticulous manner he was known for on the field.

After 18 seasons in the league, Number 18 walks away from the game as a Super Bowl champion and an all-but-guaranteed first ballot Hall of Famer. He holds several records for quarterbacks, including the career passing touchdowns record, career passing yards record, and career total wins record.

The number one overall pick in the 1998 draft to the Indianapolis Colts, Manning’s rookie season was hardly what people expected: a 1-15 record with the most interceptions in a rookie season, a record that still stands today (though Manning joked during his press conference that his brother Eli would have beaten it had he played a full season).

After that, Manning shattered expectations.

He would go on to win the NFL MVP trophy five times, be an AFC champion four times, and win two Super Bowl titles, becoming the first quarterback ever to win a title or an MVP trophy with two different teams. He is a marketing icon, an American sports legend, and a true testament to what hard work can accomplish.

But, like his rookie season, the ending wasn’t all that pretty.

Manning’s season had him leading the league in interceptions before missing almost half the season due to injury. He would return from the bench after Brock Osweiler struggled in the final game of the year, and led the team to another Lombardi Trophy.

Manning revolutionized football and the position of quarterback. A true student of the game, Manning dissected defenses with never-before-seen precision. Every defense has a weakness, and Manning knew each and every one. His audibles at the line were innovative, and now quarterbacks are judged on their ability to follow Manning’s model.

What he didn’t do with his feet or his arm, he did with his brain. And that is what will always separate him from the rest.

The debate over the greatest of all-time at quarterback will never end. Now, with Manning’s name tossed into the mix of other perennial modern era winners like Brady, Montana, Young, Elway, and Aikman, there is no doubt he has a rightful place somewhere on the all-time list.

So what lies ahead?

Manning’s retirement comes amidst swirling scandals and rumors of HGH use as reported by Al Jazeera and sexual assault allegations dating back 20 years that was recently cited in a Title IX case against the University of Tennessee. While both scandals remain largely disputed for lack of evidence and other reasons, Manning will likely try to put them to rest and keep his name out of the negativeheadlines for a while.

Like many greats before him, Manning has unlimited possibilities ahead of him. He could enter the broadcast booth, the ESPN desks, or team management field in college or the NFL. Some, like writer and broadcaster Tony Kornheiser of ESPN’s Pardon the Interruption, are hopeful he could bring his passion for football evident in his farewell speech to the position of NFL commissioner.

Regardless of where he goes, he’ll surely be eating pizza with Papa John and munching onchicken parm to jingles in commercials for years to come. Thank you for all the highlights and games over the years, Peyton. It was a great run. Omaha! Omaha!