Volleyball hopes to get stronger for CSAC conference play and beyond 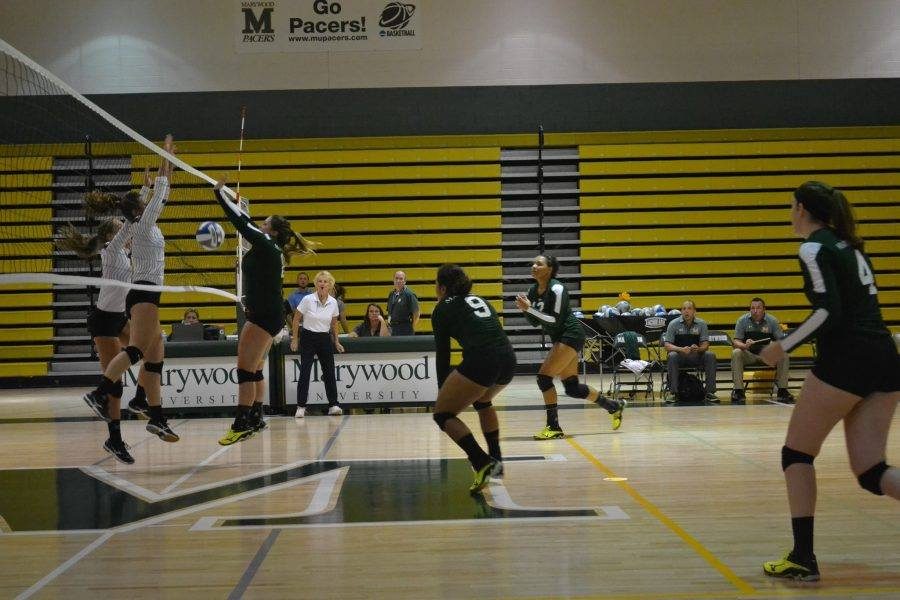 The Marywood volleyball team has lost its first 10 games of the season, but the slow start is not keeping the team down as Colonial States Athletic Conference (CSAC) play heats up.

Timothy Walsh, head volleyball coach, points to the team’s youth as a reason for the early slump. “Being a young team, we have to get that cohesiveness together. The more we play together, the better we are going to be,” said Walsh.

The second-year head coach took his team to the CSAC semifinal round last season and is hoping to see a similar finish this year. “We are looking to finish in that top quarter this year,” Walsh said.

That is going to be hard for the Pacers because of the strength of the top tier teams in the conference, specifically Cabrini College and Neumann University.

According to csacsports.org, Cabrini and Neumann have been the class of the conference for years, with both teams finishing in the top three of the standings since 2008.

Walsh admits that both Cabrini and Neumann are the teams to beat, but believes that Marywood could be in the conversation in the next few years.

“Cabrini and Neumann are in the forefront right now. But, I think in about two years, we can be at the top with this program,” said Walsh.

Walsh mentioned two teams that could be good matchups for his squad.

When Walsh came to the program last season, he discovered that Keystone and Marywood had a bit of a rivalry. “It’s been Keystone and Marywood. They finished ahead of us last year. Their coach did a really good job of recruiting, so I think that will be a good match for us.”

Walsh said Immaculata University is a good challenge because of the 2015 playoff matchup.

“Last year in the playoffs, we won the third game against them, but lost the fourth game,” said Walsh.

Carissa Dube, assistant volleyball coach, highlights some of the younger players to watch.

“I would say Mallorie Deschaine is definitely a player to look out for. She has a lot of skill and versatility on the court,” said Dube.

According to marywoodpacers.com, Deschaine, a sophomore pre-physician assistant major, was an honorable mention All-CSAC player last year. As a freshman, she led the team with kills and total attacks.

“She is very powerful, versatile on the court and willing to learn,” said Dube.

Vossler is more of a defensive threat, said Dube. “In terms of the defense, Jordan Vossler is the one to watch. She is very quick and also willing to learn.”

With such a young group, Walsh looks to stay positive no matter the team’s position in the standings. “Whether we are a top team or a bottom team, there is always things that can be improved on, but positive things as well,” he said.

Walsh is confident that the team will improve.

“I think once we start playing some of the CSAC teams, we are obviously going to do fairly well. There are some strong teams in our conference as well, but I think we are stronger this year than last.”

The team hosts its first Tri-Match at noon today against Cedar Crest College followed up by a 4 p.m. game against non-conference opponent Pratt Institute.

Walsh is confident that the Marywood volleyball program is only going to grow beyond this season. “We just want to get stronger and more competitive. We want to win more. We want to let everybody know in our conference who Marywood is,” said Walsh.