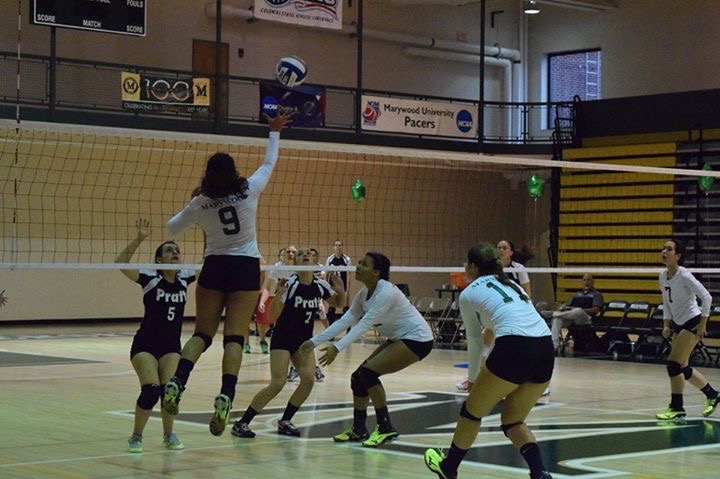 The Marywood volleyball team put an end to its 10-game losing streak to start the year with two dominant performances this past Saturday Sept. 17 in its first tri-match of the season.

The Pacers defended their home floor defeating both Cedar Crest College and the Pratt Institute of Technology in three sets apiece.

In both matches, the Pacers were led by freshman Gabby Santos, a marketing and international business major, who set a new school record in her performance.

Against Cedar Crest College, Santos broke the single-game attack percentage record posting a .857. Out of her 14 attempts in the game, she finished with 12 kills.

The Pacers finished with 10 service aces compared to six for the Falcons. The win was the Pacers’ first CSAC victory this year.

Marywood continued the day’s run against Pratt with the help of Santos, DeIulio, and freshman interior architecture major Peri Sheerin.

Sheerin finished with a team-best 13 kills and a .500 attack percentage.

DeIulio continued to distribute the wealth with 28 more assists while Santos kept her hot streak going with nine kills.

Pratt only had 13 kills in three sets compared to 39 for the Pacers. In addition, the Cannoneers finished with a -.028 attack percentage while the Pacers ended at a .276 mark.

The Pacers’ next home game is not until October 4th at 7 p.m. against Cabrini University.

Continue to follow The Wood Word for more coverage of Pacer home games.