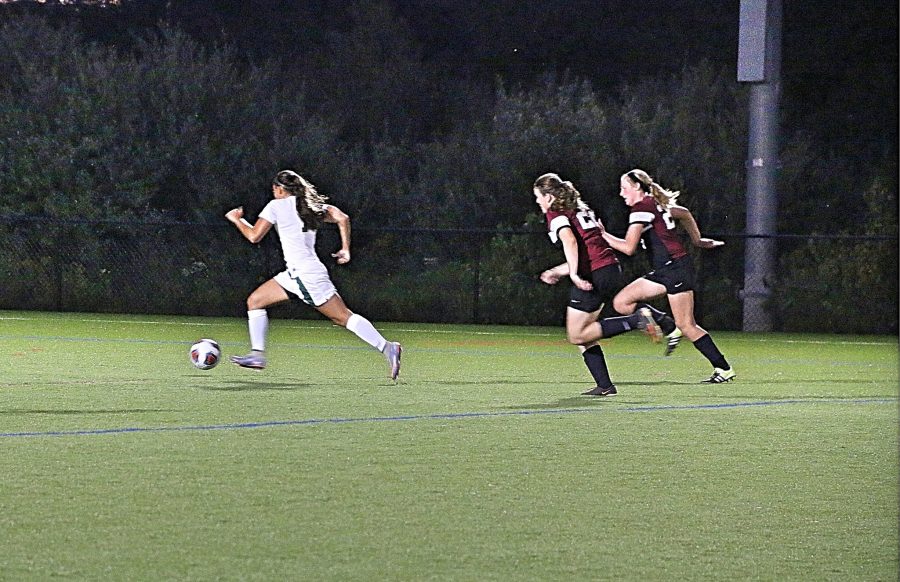 In his 17th year as women’s soccer head coach, Andrew Smith recorded his 100th career Colonial States Athletic Conference (CSAC) win. The victory came this week as the Pacers finished up an 8-1 thrashing of Cairn University.

Smith, who is also the assistant director of Athletics and Recreation for communications, now has a lifetime record of 157-124-25 with an impressive record of 100-35-14 in the CSAC.

Smith reflected on his accomplishment.

“It’s obviously an honor to reach this milestone mark in my coaching career. We’ve never shied away from playing stiff, non-conference competition and the result of that is such a strong conference mark.” Smith continued, “Obviously, it’s because of the players, past and present, that I can attain such a milestone, so the thanks and praise has to go to all of them.”

The team had noteworthy offensive performances from Jackie VonItter, a freshman athletic training major, who recorded a hat trick, and freshman forward Shea Olszewski, who scored two goals, according to marywoodpacers.com.

The scoring opened up quickly when VonItter received an assist from sophomore Aly Barlok, a communication sciences and disorders speech-pathology major, to put the ball in the back of the net for the Pacers’ first goal of the day.

After another goal in the 27th minute by Ashley Kruchinsky, a sophomore marketing major, Olszewski scored back-to-back goals in a three-minute span.

Marywood did not let up in the second half, VonItter scored her second goal just 10 minutes in, and eventually finished her hat trick in the 81st minute.

With the win, the Pacers improve to 1-4-1 (1-0 CSAC) on the season. The team hosts conference opponent Cedar Crest College this Saturday at 4 p.m.

Follow The Wood Word to get continuing coverage of Marywood Pacer home games.