COMMENTARY: NBA Preview: The King, The Youth, and The Super Team 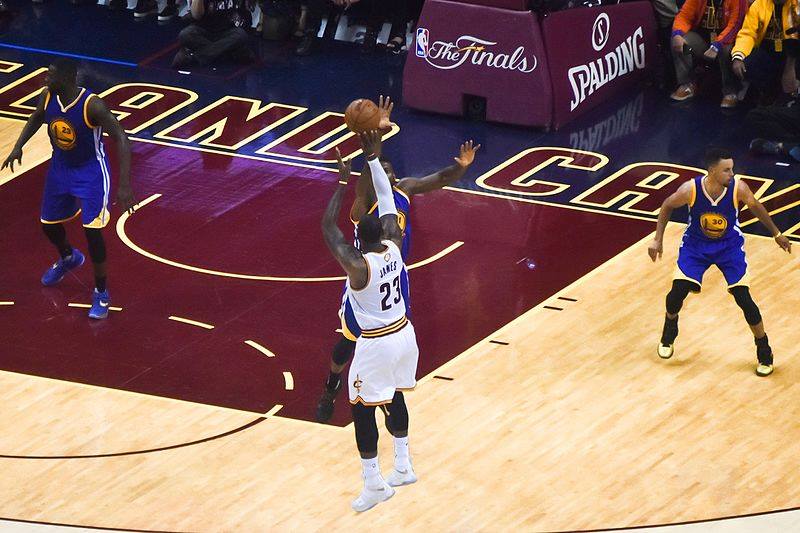 By Erik Drost, via Wikimedia Commons

Coming off the heels of one of the most watched and dramatic NBA Finals in recent memory, the NBA regular season has finally arrived. So, what’s changed? A lot actually.

Kevin Durant is a Golden State Warrior. Russell Westbrook is out for revenge on his former teammate. Dwyane Wade is not playing for the Miami Heat anymore.

Rookies like Ben Simmons of the Sixers, Brandon Ingram of the Lakers, and Buddy Hield of the T-Wolves look to shine. Rookie of the year Karl Anthony-Towns looks to duplicate his sensational 2015-16 season.

It’s going to be a season with plenty of high-stakes drama to go around. But, I’m only going to focus on the top contenders for now.

The Eastern Conference
Cleveland Cavaliers Cleveland comes off a magical comeback from being down 3-1 to the Warriors in the Finals. King James was crowned with his third Finals MVP award and Kyrie Irving hit the series-clinching shot over the back-to-back NBA MVP Steph Curry. The Cavs won the first championship for Cleveland, Ohio in over 50 years. They look to repeat with Irvin, the best point guard in the league, and James, the best player in the world.

Indiana Pacers The Pacers made strides last season when a healthy Paul George returned from a brutal leg injury. According to espn.com, George averaged 23-7-4 last season. The front office committed to building around him with the addition of All-Star point guard Jeff Teague to compliment Monta Ellis, and a still somewhat formidable Al Jefferson to the rotation. The Pacers look to dethrone the King this season.

Boston Celtics They may be the most complete team in the NBA without a superstar. Budding point guard Isaiah Thomas has shown glimpses of that brilliance, but it won’t be enough to challenge the Cavs. The Celtics look to get back in the hunt with their #3 overall pick Jaylen Brown, a small forward out of California. They also acquired four-time All-Star Al Horford from the Hawks, which will improve the play at the center position as Celtics centers ranked dead last in FG percentage last year.

Toronto Raptors Who can forget a team that finished one game back of the Cavs last year in the regular season? With most players returning this season, they will contend. Kyle Lowry and DeMar DeRozan look to lead their team back to the Eastern Conference Finals. With Jonas Valanciunas, Patrick Patterson, and DeMarre Carroll rounding out the starting five, the Raptors are well placed to give the Cavs a run again.

The Western Conference
Golden State Warriors With the addition of Kevin Durant, the Warriors look to bounce back from that devastating loss to the Cavs. Throughout the preseason, the Warriors have been unstoppable and I don’t doubt that the team will have major success going forward. But, it’s championship or bust for a franchise with two of the top three players on the planet. Can Durant, Klay Thompson, Steph Curry, and Draymond Green coexist on the court? Is the road to a third straight NBA Finals that easy? We’ll find out soon.

San Antonio Spurs The Spurs have loaded up the frontcourt to counteract the fantastic backcourt play of their Western Conference foes from Golden State. With future hall of famer Gregg Popovich at the helm and having added Pau Gasol to compliment LaMarcus Aldridge at the four and Kawhi Leonard at small forward, the Spurs should give the golden boys a run.

Oklahoma City Thunder Many analysts overlook the Thunder as championship contenders and they are probably right. When a team loses a former NBA MVP and four-time scoring champion, it is going to take a step back. I’m not proclaiming the Thunder are going to be world-beaters, but with a quietly vengeful Russell Westbrook, the center combo of Steven Adams and Enes Kanter, and the addition of a career 16-4-4 Victor Oladipo, the Thunder are going to be in the middle of the pack.

What does this all mean? It means that we can chalk in another Cavs-Warriors Finals.

The Warriors just have too much offensive firepower in an offensive-driven league. Curry, Thompson, and Durant space the floor and share the load to lead the Warriors back to the Finals.

LeBron James’ teams have won the Eastern Conference for the past six straight seasons. That is domination. If Kyrie Irving can stay healthy for a full 82 games of basketball, the Cavs roll to the Finals again.

As far as a prediction, I need to stick with my all-time favorite player.

LeBron plays with no pressure for the first time ever and dominates the Warriors like he did in the last two NBA Finals by averaging 32 points, 11 rebounds, and seven assists. Kyrie Irving replicates his magic against Curry. Kevin Love and Tristan Thompson clean up down low. The Cavs repeat in a hellacious seven game series.