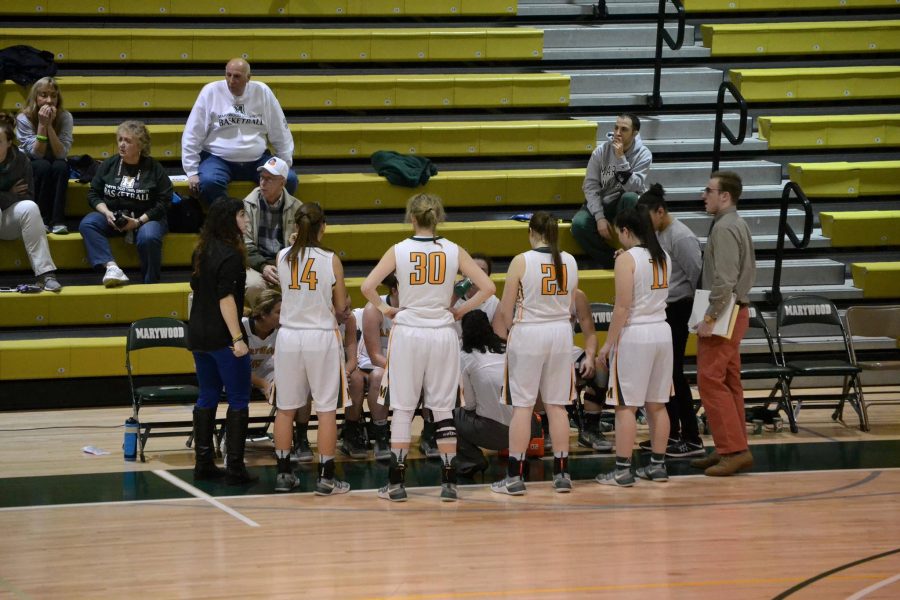 Women's basketball head coach Tara Macciocco talks to her team during a timeout.

Marywood University: 51 Gwynedd Mercy University: 43
The women’s basketball team continued its winning streak against the Griffins on Wednesday night. With the victory, the Pacers improve to 8-1 in the Colonial States Athletic Conference (CSAC).

Both teams battled closely throughout the game. According to marywoodpacers.com, the Griffins took a one-point lead into the fourth quarter.

Sophomore guard Kylie Devlin opened the frame with a three pointer, setting the tone for the final 10 minutes.

Griffins’ forward Nicole Dombrowski, who scored a game-high 19 points, fired back with a jump shot to even the score at 36. After a few more lead changes, the Pacers finally took control.

With a bucket from both Devlin and sophomore center Natasha Hessling, Marywood led 45-40. The team would knock down key free throws to close the deal.

The Pacers look to continue winning as they travel to Baltimore, M.D. to take on Notre Dame of Maryland University this Saturday at 2 p.m.

Gwynedd Mercy University: 75 Marywood University: 65
After a tough road loss to Cabrini University, the men’s team looked to bounce back against the Griffins. However, Gwynedd Mercy, now 9-2 in the conference, was not going to lose its third spot in the rankings.

Despite that effort from Elleby, the Pacers were leading 27-24 with 4:17 left in the first half. Gwynedd Mercy then went on an impressive 10-2 run to close the half and never looked back.

The Griffins held strong in the second half with double-digit contributions from Rip Engel (15), Arron Goodman (11), and Ty Jones (11). With a little over two minutes remaining, Gwynedd Mercy’s Rich Dunham hit a key three pointer to extend the lead to five.

The Pacers travel to Rosemont College for another conference game this Saturday at 2 p.m.