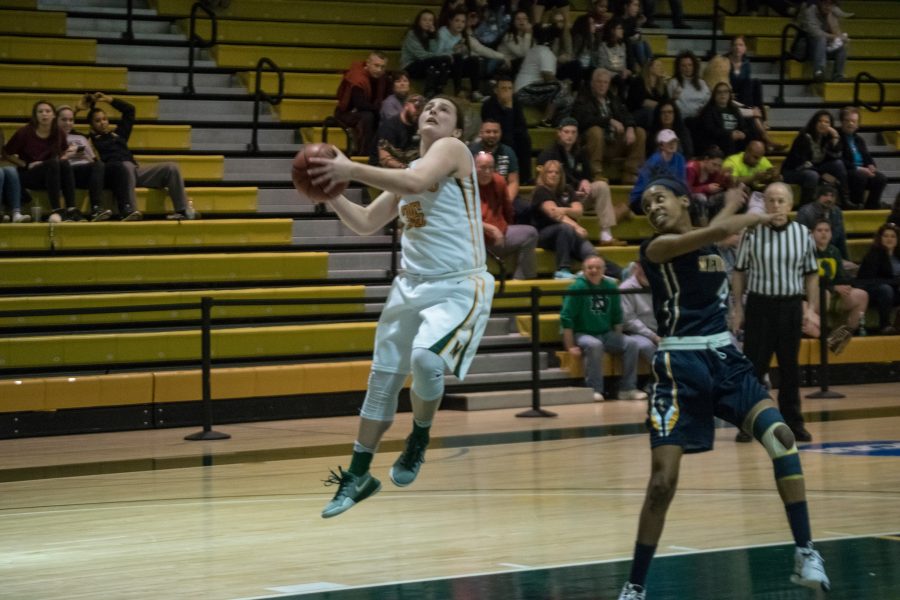 Marywood Sophomore captain Gab Giordano goes up for a shot.

The women’s basketball team clinches the #1 seed in the playoffs, the men’s team’s season ends and men’s lacrosse officially begins. See how it all played out this past week.

The Pacers struggled in the first half shooting a mere 35.3 percent from the field, a mark that improved to 54.8 percent in the second half, according to marywoodpacers.com. Marywood outscored the Falcons 25-12 in the third quarter to pull away for good.

Sophomore guard Gabby Giordano led the way both offensively and defensively for the Pacers. Giordano had 15 points, eight rebounds and six assists. She also took care of the ball by not committing a turnover in the game.

Freshman guard Erika Thomas scored 15 points of her own, while sophomore center Natasha Hessling had 11.

The difference in the game for the Pacers was their ability to connect with both the long ball and at the charity stripe. Marywood shot 37.0 percent from beyond the arc for the game and an impressive 82.6 percent from the free-throw line.

Neumann University: 56 Marywood University: 55
The Pacers’ 13-game winning streak came to an end in a last-second finish on Saturday. Neumann’s forward Mariah Maciejewski laid the ball in to give the Knights a one-point lead in the final seconds of the game.

Gabby Giordano was a highlight for Marywood in the loss. She scored 21 points in 40 minutes and was four of seven from behind the three-point line. Jordan Barth also scored double-digit points for the Pacers with 12. She also had two steals and six blocks.

Marywood will host the lowest remaining seed in the CSAC playoffs at the Insalaco Arena for the semifinal game this Wednesday at 7 p.m.

Neumann University: 86 Marywood University: 66
The men’s basketball squad fell to Neumann as well on Saturday. Dexter Shy led the team on his own senior night with 15 points, six rebounds and five assists.

Neumann had five players in double digits, including the game leaders in points with DeShawn Lowman and DeAndre Williams each scoring 16. The team shot 56 percent overall and 33 percent from beyond the arc.

Besides Shy’s 15 points, Marywood’s Tip Swartz and Jeremy Ringland scored 13 and 10 points, respectively. The team totaled nine steals and 18 assists on the night.

The Pacers fell behind 3-0 early in the second quarter as Elizabethtown’s Jason Clough scored a goal at the 11:48 mark.

Marywood would cut that lead to just one on back-to-back goals from freshman midfielder Eric Morin (9:55) and junior attacker Matt Casto (7:41).

The Blue Jays then rattled off nine straight goals from the 5:44 mark in the second quarter to the three-minute mark in the fourth to rout the Pacers.

Jack Meyers (1-0), Elizabethtown’s goaltender, spent over 51 minutes at the net. Meyers had five saves and allowed just two goals. The Blue Jays also outshot the Pacers 37-15 on the afternoon.

The Pacers next game will be home against Wilkes University on Wed. at 4 p.m. 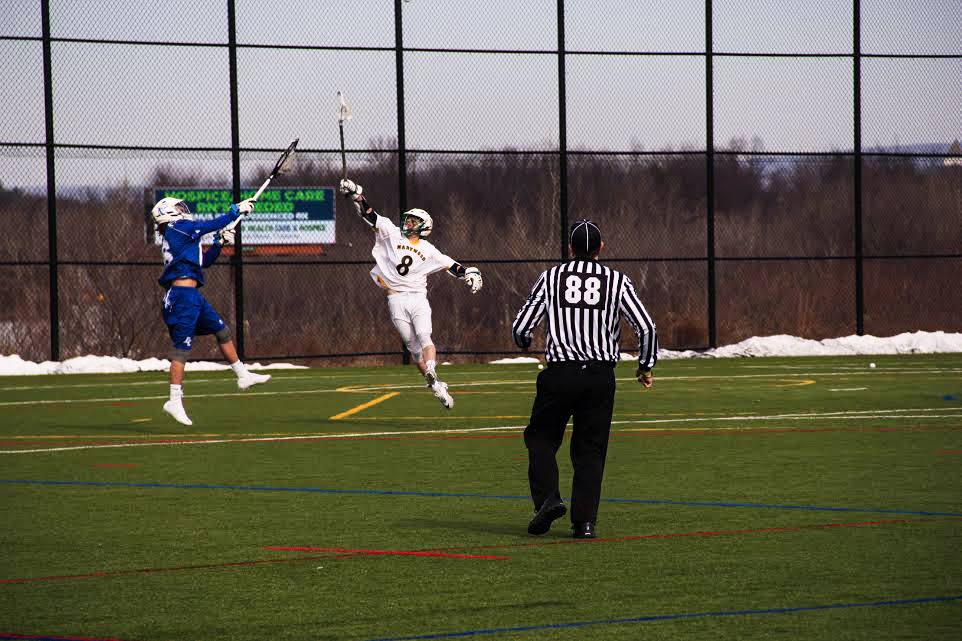 NOTE: A full recap of how the men’s and women’s swimming and diving teams fared at the Landmark Championships will be coming soon.