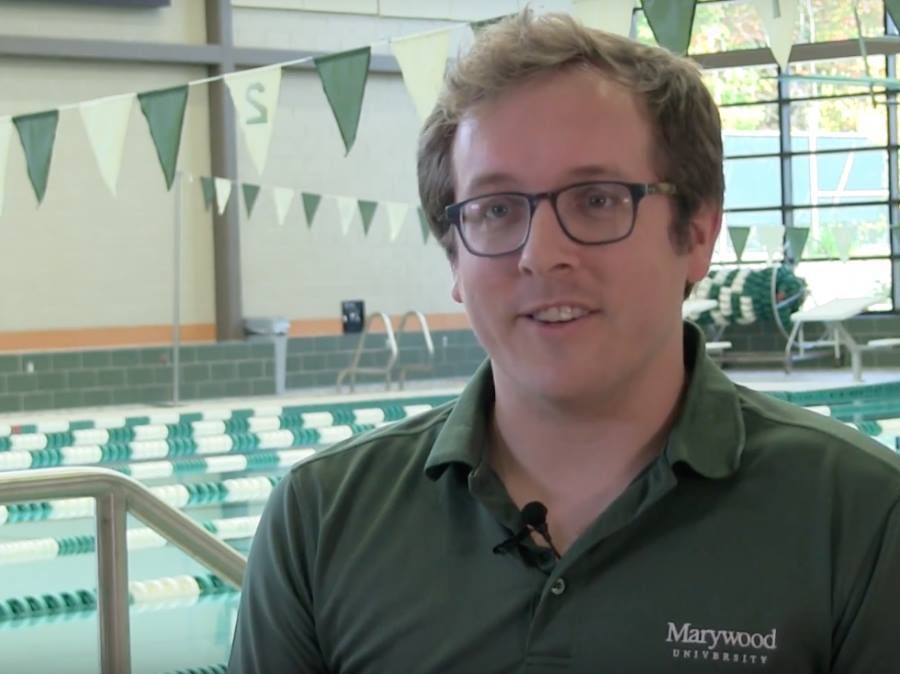 Swimming and diving head coach Noah Beck coached his teams to a fifth place finish at the Landmark Championships.

Noah Beck’s first full season at the helm of Marywood’s Swimming and Diving Program brought a fifth place finish at the Landmark Championships with many of the team’s swimmers breaking school records and marking personal bests.

“We broke 13 records at the conference meet between swimming and diving,” said Beck. “We had 10 or 11 medal finishes and last year I think we only had a couple.”

The Pacers took home several medals at the conference championships, including silver medal finishes by sophomore Julia Randolph in the 400-meter Individual Medley (IM) championships and junior Virginia Cobb in the 200-meter freestyle. Junior Courtney Snyder had two silver medals in the one and three-meter dives. Sophomore Justin Stonier finished third in the three-meter dive, while senior Bryon Scholl earned a bronze medal in the 600-meter freestyle.

Beck credited the women’s 800-meter relay team and said, “They’re another group that deserves some [praise]. They ended up breaking last year’s record by over 10 seconds.”

The team, consisting of Cobb, Randolph, sophomore Mary Cate Coyle and sophomore Mia Nardone, broke the record, which was previously held by three of the group’s members before the Landmark Championships.

Beck noted that throughout the season, the team had a total of over 60 personal best improvements.

“In the end, that [personal bests] is what you’re looking for,” he said.

Beck also complimented the strides the team made outside of the meets.

“Part of this year was to get the team to be a little more cohesive, to find that passion for what they do again,” he said.

Beck did note a “lack of passion” during the start of the season, where the team lost five of its first six meets.

“It was a little too much of a grind for some of [the team], and it was helping them find out ‘why did you start doing this and why you’re still going to do this,’” he said.

Beck said the team’s hardest goal to meet throughout the year was finding their passion.

“It’s a difficult thing to do, come in and train 6,000 yards a day. It’s a grind, getting up at 5:30 or 6 in the morning to train. If you have that passion, you’ll do it. I think that finding that was the biggest success of our team,” Beck said.

Beck also noted cohesiveness as something the team needed to find.

“Even though in swimming, you think about the individual, if you have a team that’s clashing and can’t get past their differences, it’s a long season,” Beck said.

Beck added that he would like to see his swimmers’ passion for the sport continue in the 2017-2018 season.

“I think I’m a teacher as much I am a coach. Finding how much of an ability I have to impact their ability to be gritty and be resilient is something I look forward to next year,” said Beck.

The team finished 4-6 in dual meets and finished fifth out of eight teams in the conference championships. Both Beck and the Pacers are looking forward to next season with a drive to make it great.