The Wood Word • May 2, 2017 • https://www.thewoodword.org/sports/2017/05/02/pacer-sports-report-mens-lacrosse-advances-to-csac-final-softball-to-host-playoffs/ 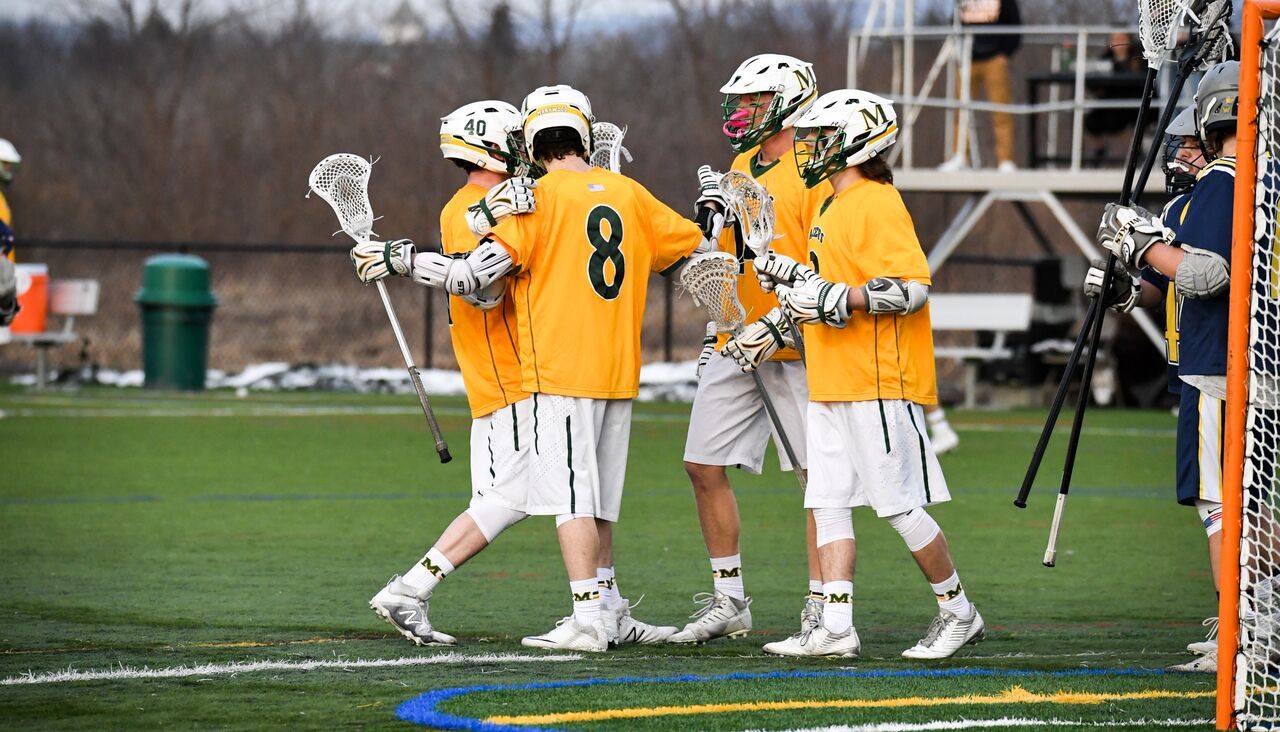 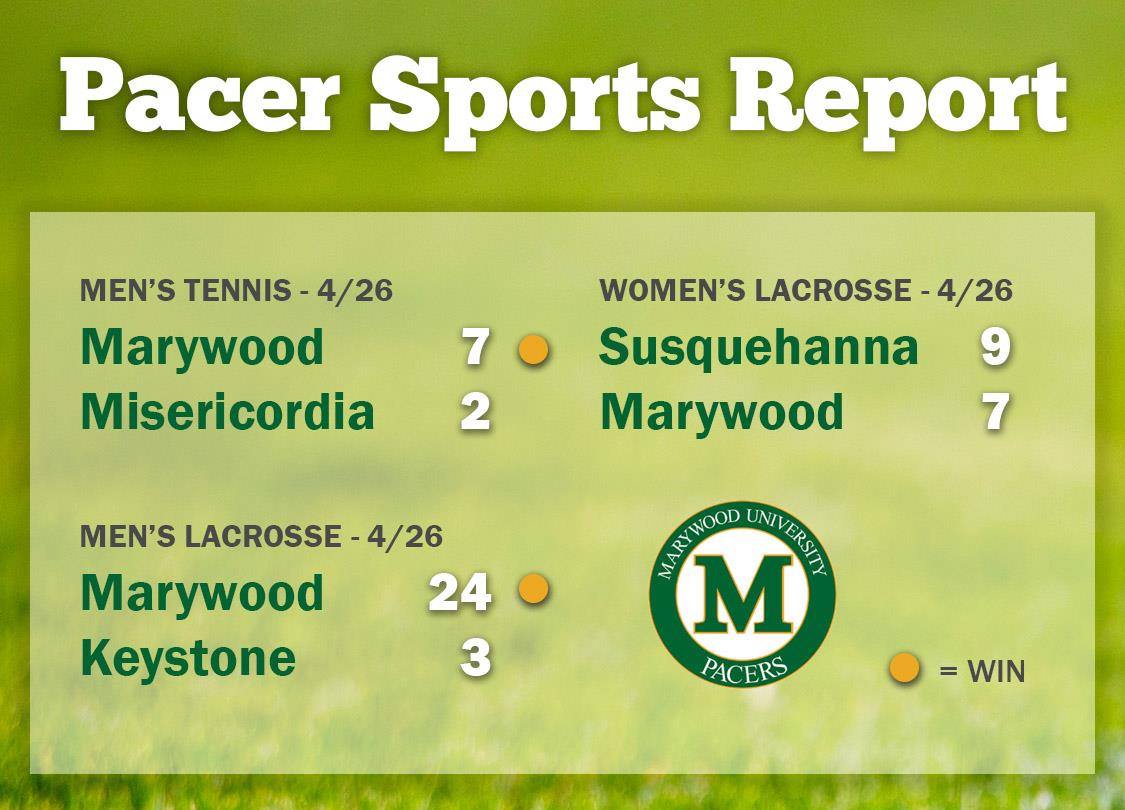 Junior Ahmed AlOreif and senior Bryon Scholl got the Pacers off to a good start winning 8-6 at one doubles.

The Cougars’ Murphy Lynch and A.J. Morgan-Baber evened things up with a victory over freshman duo Brendan O’Rourke and John Shebby at two doubles.

Junior Ulises Munoz-Santos and sophomore Momar Fall fired back with a win at three doubles to give Marywood a 2-1 lead.

AlOrief fell to Misericordia’s Corey Dulsky 6-0, 6-1 at one singles, which would be the only loss for the Pacers in singles play.

The Pacers swept the rest of the matches.

Marywood closed out the season 3-9 overall with a 2-5 Colonial States Athletic Conference (CSAC) record. The team missed the conference playoffs for the first time since the CSAC initiated the team playoff format in 2008, according to team records.

Men’s Lacrosse v. Keystone College
The story over the last few weeks for men’s lacrosse has been the emergence of junior attacker Matt Casto. That story continued in a rout over Keystone.

With a 10-point performance, Casto now finds his name all over the Marywood record books.

With his second goal of the game at the 12:03 mark in the first period, Casto became the ninth player in program history to reach 100 points.

He then jumped to seventh on the all-time points list with two more goals and a career-high six assists.

That assist total ties him with Dylan Swope (‘15) for the second-most assists in a single game in program history.

But Casto was not the only Pacer to break records as one of his teammates, junior midfielder Riley Litman, got involved as well.

Following Casto’s lead, the Pacers also broke records as a unit. The team shattered the single-game records of shots (86) and shots on goal (56).

With the victory, the team clinched the #2 seed in the CSAC playoffs.

Freshman midfielder Gwyneth Gleason broke the ice with her 33rd goal of the season at the 21:56 mark.

Junior midfielder Caitlin Watson scored a little over a minute later to put the Pacers up 2-0.

The Crusaders then scored back-to-back goals by Una Heinzerling and Ashley Rose Lynn to even it up at two.

Gleason scored again to put the Pacers back in front, but Susquehanna took the momentum back going up 5-4 at the end of the half.

Freshman midfielder Gina Babcock tied the game 5-5 on a feed from Gleason at the 21:25 mark.

Rose Lynn scored two-straight unassisted goals followed by a goal from Caroline Rabiecki to give the Crusaders a comfortable 8-5 cushion.

Marywood tried to come back with a few late goals, but could not overcome the three-goal flurry.

The Pacers are set to host a conference semifinal game next Wednesday. Both the Pacers’ opponent and the time of the game are yet to be determined. 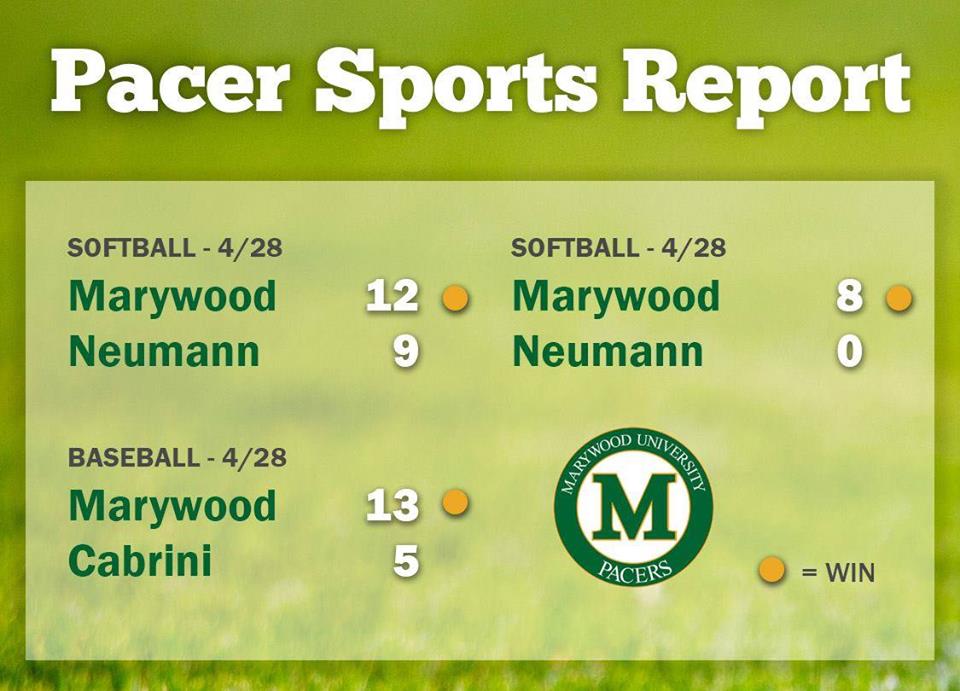 Baseball v. Cabrini University
With the playoffs looming and the Pacers needing to virtually win out to get in, it was the start of a crucial series with Cabrini.

Marywood did not mess around jumping out to a 7-0 lead after just two innings.

Freshman left-fielder Jake Schuster played a huge part in that hot start including a three-run inside-the-park home-run in the bottom of the first and a two-run single in the second.

Sophomore right-hander Salvatore Monello took to the hill and delivered a solid performance.

The Pacers just kept hitting throughout the game. Freshman catcher Anthony Navaro hit his second home-run of the season.

Graduate student Vince Rebar reached base each of the five times he was at the plate- three hits, two walks, three RBIs.

Marywood completed the sweep over Cabrini on Saturday to keep their playoff hopes alive.

Game 1: Softball v. Neumann University
It marked the most important doubleheader of the season. With sole possession of first place in the conference on the line, the Pacers and Knights battled hard in game one.

Neumann struck first posting four runs in the top of the first inning off of sophomore right-hander Katie Siano.

Marywood got three of those runs back in the bottom half. Two runs came off a double from designated hitter Kirstie Alvarez.

Siano’s struggles continued in the second. After committing an error, she allowed two more runs to cross the plate.

Now down 3-6, the Pacers’ offense fought back yet again. The team scored three runs on four hits tying the score 6-6 at the end of the second frame.

Siano finally settled in allowing just two earned runs over the rest of her 4.1 innings of work.

Down 8-9 heading into the bottom of the sixth, the Pacers took advantage of two Knight’s errors and tallied four runs.

Alvarez closed out Neumann by getting the final two outs in the seventh.

Game 2: Softball v. Neumann University
In the second game of the doubleheader, Alvarez dominated the Knights both offensively and with her arm.

After a one-two-three top of the first, Alvarez connected with a double which sent junior shortstop Alexa Scala and senior third baseman Brooke Labs across home plate.

The Knights went three-and-out again in the top of the second.

Marywood then put up five runs in their half. Both Alvarez and Labs had two RBI doubles in the inning.

With the sweep, Marywood leapfrogged Neumann for first place in the conference standings. 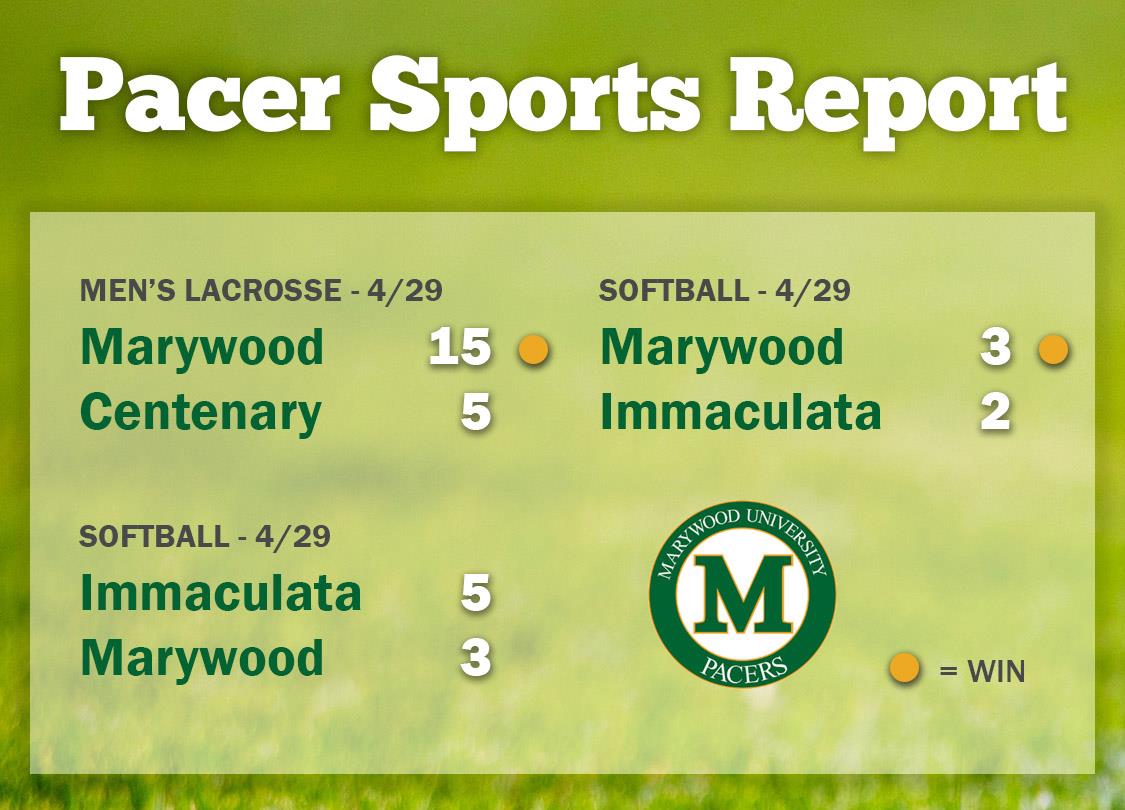 CSAC Semifinal: #2 Men’s Lacrosse v. #3 Centenary UniversityBoth Maini and Casto continued their individual momentum against the Cyclones in the semifinal game this past Saturday.

With three goals and three assists, Maini not only helped his team advance to the conference title game, but became the tenth player in program history to reach the 100 Point Club.
Casto added two goals and two assists to his impressive numbers on the season. He tied the single-season school record for goals.

Junior goalkeeper Chris Favale got the win with 10 saves on the afternoon.

The Pacers dominated the Cyclones in nearly every statistical category with more shots, more ground balls and posting a better face-off percentage.

Marywood travels to Radnor, PA to face #1 seed Cabrini University in the CSAC Final this Saturday.

The Mighty Macs were led by their ace, sophomore right-hander Jessica Bormann. Bormann, now 11-4 on the season, allowed only three runs in a complete game.

The difference in the game was in the error column on the final line. Marywood committed three errors, all in the third inning. Immaculata, zero.

Even with the errors, the Pacers still had a chance to win the game in the bottom of the seventh.

With the bases loaded and two outs, Alvarez was up at the plate. She would ground into a fielder’s choice to end the game and the winning streak for Marywood.

Game 2: Softball v. Immaculata University
Marywood bounced back in game two. The result, the team locked in the #1 seed in the CSAC playoffs.

Alvarez yet again pitched a complete game, finishing the season 9-5. She allowed just one run on seven hits while also punching out five Mighty Macs.

Two of those three runs allowed came off the bat of Scala who had an RBI single in the first and an RBI double in the fifth.

But, it was sophomore second baseman Hannah Docalovich who connected with the ball to bring in the game-deciding run.

Alvarez put down the Mighty Macs one-two-three in the top of the seventh to clinch the win.

The Pacers now wait for their opponent as the team will host the lowest remaining seed in Friday’s tournament opener.