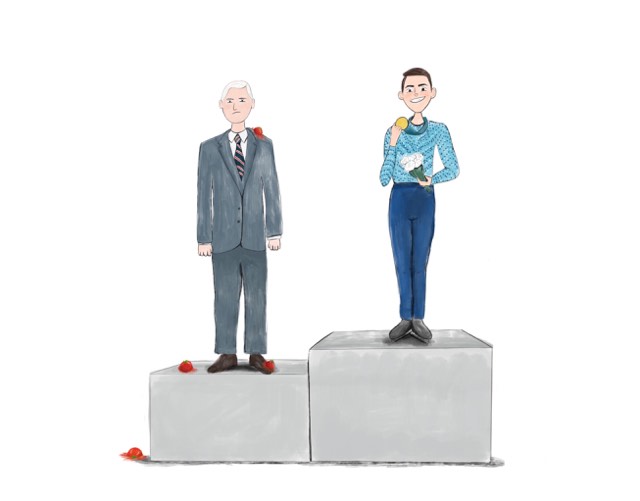 I hope you enjoyed hiding behind the most controversial, unhinged and morally corrupt president in the history of our country.

While your commander-in-chief creates negative headlines at an exhaustively alarming pace, you have remained politically unharmed. While the leader of the free world continuously tweets inaccuracies and mistruths, you have remained silent. While the President’s approval rating plummets to the worst in history, you remain unscathed.

Well Mr. Pence, that’s all about to change.

And it’s all thanks to your worst nightmare: Adam Rippon.

You probably hadn’t heard of Rippon before the Winter Olympics. Now, you will never forget his name.

You argued for public funding of conversion therapy, or as you put it during your 2000 congressional campaign, institutions which provide assistance to those seeking to change their sexual behavior.

You opposed gay marriage as governor of Indiana and signed a bill making it legal for businesses to cite religious freedom when refusing service to gay and transgender people.

As a congressman, you voted against employment nondiscrimination protections for gay and transgender people.

You also voted against the repeal of “don’t ask, don’t tell” as a member of Congress.

You are clearly an enemy of the LGBTQ+ community.

While I cannot speak for the entire community, you scare the hell out of me. I would rather the “Tweeter in Chief” to remain in the White House because he is less dangerous to my personal life than your destructive and homophobic political agenda would be.

So, I hope you enjoyed watching Rippon win a bronze medal.

I also hope you enjoyed watching snowboarder Gus Kenworthy share a kiss with his boyfriend on national television for the world to see, as he represents the United States.

You may be repulsed by it, but to millions of people it’s a beautiful act of one human loving another.

You may not believe gay love exists, but it continues to get stronger.

You may want Rippon or Kenworthy converted to being straight. Well, that one is pretty darn impossible.

No matter what you feel, do yourself a favor. Open your mind to the very real possibility that this is the way society works now and will work for the rest of time.

So, meet with Rippon. Open your closed mind. Talk things out. Maybe you can learn a thing or two about gay culture.

And who knows, maybe you can be converted in your own way.

A proud openly gay member of the LGBTQ+ community