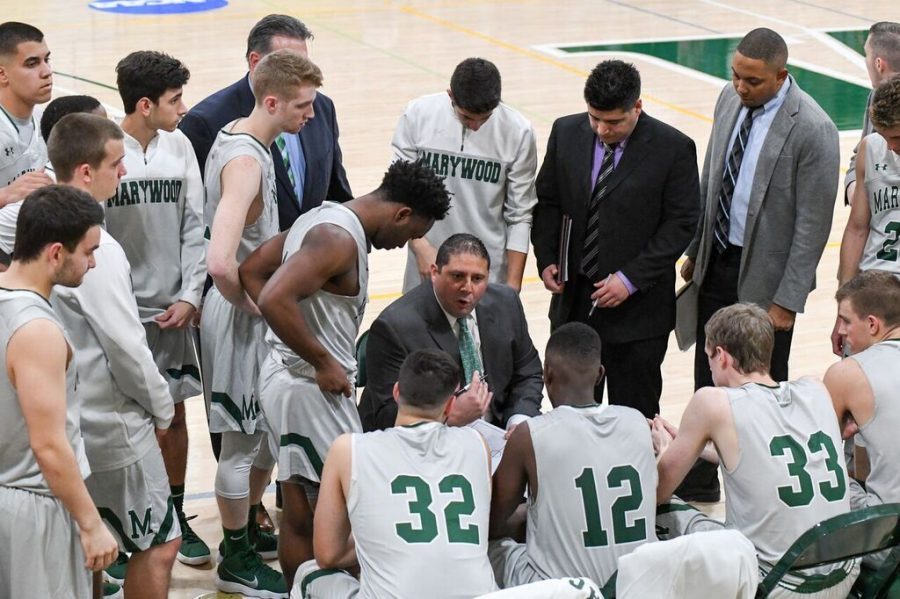 The Pacers are the first team in program history to record 10 conference wins in a regular season. Photo credit: Photo courtesy of Marywood Athletics

Former Head Coach Bob Simmons led the team to a 9-9 Colonial States Athletic Conference (CSAC) record in the 2014 to 2015 year. Simmons then notified Marywood of his departure to Allegheny College just one month before the next school year began.

About a month before practice officially began in the fall of 2015, Mastroianni was given the keys to the program.

The team went an abysmal 2-16 in the conference during Mastroianni’s first season.

With Mastroianni in control to recruit his players and implement his own system, his squad jumped to five conference wins last year and then to a program-record 10 this season.

Mastroianni reflected on the evolution of his program.

“Those first two years for me were challenging. We stayed the course. We were patient. We grew. We had some bumps along the way, but improved every year. That doesn’t make me a prophet. It makes me an experienced coach,” said Mastroianni.

Senior forward and team captain Kendall Farrell said the first two years under Mastroianni were “rough” due to players leaving the program and a lack of cohesiveness.

But, Mastroianni continued to inspire the team.

“He’s always tried to inspire his teams in anyway he could and expected nothing but the best from each players. I would say this year we are starting to see the turn around,” said Farrell.

Mastroianni credits his players confidence as one of the biggest reasons for the team’s historic success.

“I think the players on our roster that stayed with us were maturing, growing and learning and getting more intelligent as basketball players,” said Mastroianni.

Once the veteran players believed in the new culture, it started to trickle down to the rest of the group, according to Mastroianni.

Mastroianni also complimented the freshmen and their competitive contributions to the team.

“[The freshmen] came in as fighters, competitors and winners which permeated through the group,” he said.

“I credit our captains and specifically Kendall Farrell. He has been our outward voice. He has been the vocal leader of the team,” he said.

Farrell, who averaged 5.5 points and five rebounds in his final season, led the chant of “hate to lose, love to win” before breaking the final pregame huddle.

While Farrell did admit he was the main vocal leader, he complimented the experience of the other team captains as well.

“My co-captains James [Curley] and Jeremy [Ringland] were also a huge help because they have a tremendous amount of experience on the court.” Farrell continued, “The combination of all 3 of us help to create a very well balanced locker room environment and with that not allowing our emotions to get too high or too low.”

Swartz was named to the First Team All-CSAC while Ringland was an Honorable Mention.

Mastroianni said Swartz’s ability to let go of being in control of everything was his biggest point of growth this year.

“He let himself be coached. I also think he finally believed that we believed in him,” said Mastroianni.

Swartz finished his junior season averaging 18.5 points and 6.4 rebounds per game and ranked first in Division III with a 94 percent free throw percentage on 100 attempts. He will return next year.

While the season was labeled an historic success for many reasons, Mastroianni is not satisfied yet.

“Certainly we’re not satisfied. We are going to keep trying to work better and smarter and improve. But, it does feel good to be in this position right now after three years.”