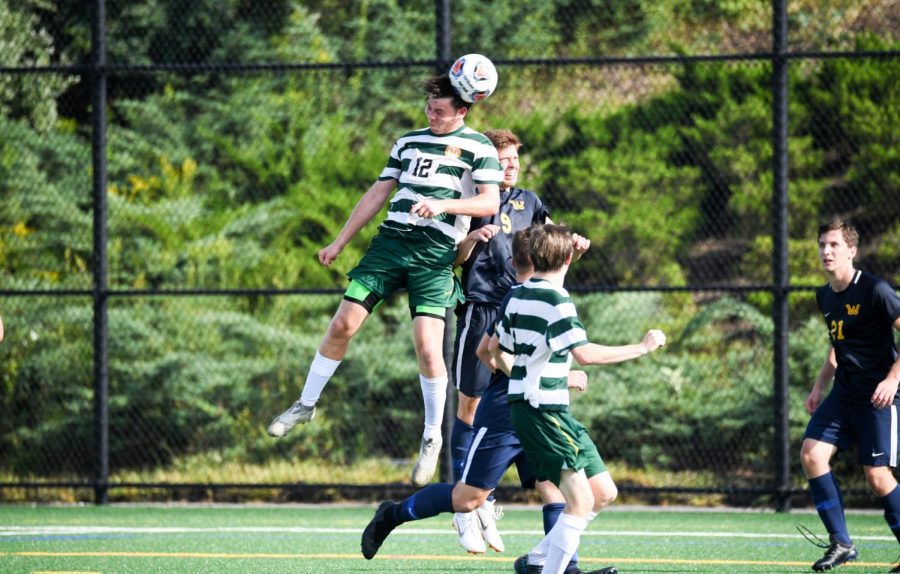 Zac Lloyd gets up high to head a ball. Photo courtesy of Marywood Athletics

Despite the weather’s best efforts at sabotage, the Pacers kicked off the season against Wilkes on Labor Day.

The match was the first for new Marywood coach John Velasco. The teams held each other scoreless in the first half, but a pair of second half goals by the Colonels were the difference in a 2-0 loss.

The opening goal came in the 49th minute off the foot of Gabriel Nieves with the assist by Shane Henehan. Andrew Reichard applied the finishing touches to the Wilkes win when he converted a 56th minute penalty kick.

For the match, Wilkes outshot Marywood 20-7 and the Pacers failed to put a shot on goal.

Marywood opened the scoring when Kassandra Riemer found the back of the net in the 10th minute. The Pacers held the lead for only 10 minutes when they let in an opposing goal. Then, in the 30th minute, Katie Goldsmith put away the winning goal.

The Dutchmen followed with two more goals to secure a 4-1 win. Lebanon Valley outshot Marywood 15-10 and 10-4 in shots on goal.

The Pacers rallied from down 2-0 to secure a 3-2 overtime win over Cedar Crest.

The Falcons jumped out to a 2-0 lead within 15 minutes. Marywood goals from Jenna Dickey and Jaida Marks leveled the game at 2. In overtime, Marks scored again to complete the comeback for the Pacers.

The Pacers dominated Cedar Crest in shots at 20-4 and shots on target at 10-3.

Marywood’s field hockey program scored its first win over a nationally-ranked opponent with a 2-1 win over #14 Kean University.

Kenzie Drew supplied both goals for the Pacers after they found themselves trailing 1-0 early. Drew tied the game in the 45th minute and scored the game-winning goal with just under three minutes to play.

Quality trumped quantity as Kean outshot Marywood 16-8 and 12-5 in shots on target.

Women’s Soccer vs. University of Scranton

The Pacers dropped a 7-0 decision to the University of Scranton.

The Royals pushed their record to 4-0 while the Pacers’ first win eluded them in the match. Scranton’s Grace Elliott recorded a brace after scoring goals in the 23rd and 55th minutes.

The Pacers found themselves down 14-13 and facing match point. The team rallied to take the three final points of the match to secure the victory. Gabriella Santos had 16 kills and 13 digs for Marywood, and Sara Burgos contributed 35 assists.

The Pacers were the best of three teams at Glenmaura National Golf Course. Marywood recorded a team score of 349 or 64 over par.

That score was good enough to beat King’s by ten strokes and Misericordia by 59 strokes.

James Tressler finished first overall with a ten over par 81 for the Pacers.

Marywood’s Joseph Weber, Austin Zehel and Brendan Murphy all finished in the top 10 for the day.

Lycoming edged the Pacers 5-4 in Marywood’s first home match of the year.

A quick start for the Golden Eagles put the Pacers in a 2-0 hole.

In the second half, the teams cancelled each other out with a goal each. Zac Lloyd scored the lone Pacers goal in the 78th minute. Rayneri Ruiz recorded a brace for the Golden Eagles.

Marywood won the shots and shots on goal battle 17-14 and 7-6 respectively.

The Pacers kept their hot start going against Oswego State.

Marywood posted a 7-1 win over the Lakers. In the win, Jenna Dickey and Gwyneth Gleason both scored two goals for the Pacers. Lindsey Quinn, Sara Sterchak and Kenzie Drew tallied the other Pacer goals.

Marywood quadrupled Oswego State 24-6 in shots and put six shots on goal to Oswego State’s one.