ANALYSIS: Women’s soccer is confident moving into a new conference 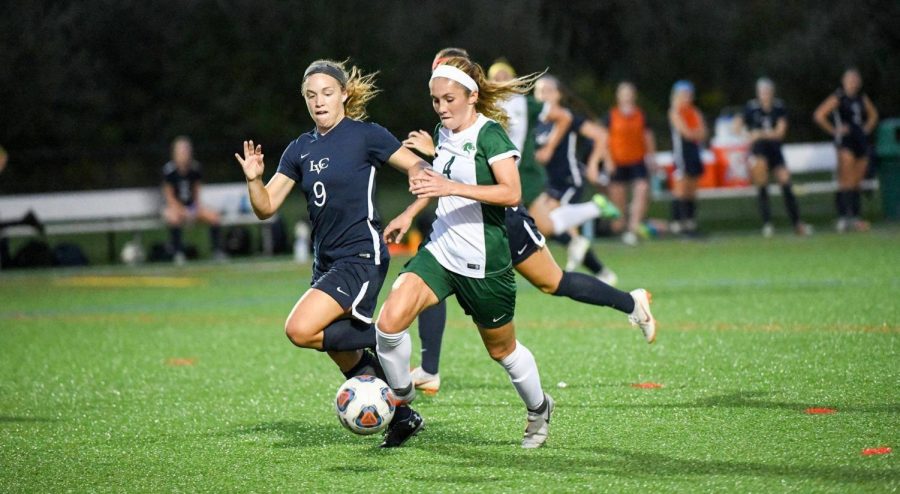 The Marywood women’s soccer team is beginning conference play in a new home. Last season, they competed in the Colonial States Athletic Conference, (CSAC) but this season they have entered the Atlantic East Conference (AEC).

The new conference holds teams mostly familiar to Marywood. In the 2017 season, the Pacers secured the number one seed for the CSAC playoffs. The team made it to the CSAC final, where it lost to Cabrini University in a game that included a controversial disallowed Marywood goal.

The two schools new to Marywood’s conference are Wesley College and Marymount University. Head Coach Andrew Smith’s squads have faced these teams in the past, but not recently.

The team finished non-conference play this season with a 3-6 record. It is similar to last season when they went 0-4 heading into conference play. Smith, who is in his 19th season as head coach for the women’s soccer team, stressed the importance of scheduling harder teams at the beginning of the season.

“We’ve always played very tough in our out-of-conference schedule, and the reason we do that is to prepare us to hopefully make the conference games easier,” said Smith.

Losing to a better team is all in preparation for conference play. This season Marywood has already faced off against some seasoned teams, including the undefeated University of Scranton and the regionally-ranked Wilkes University.

Team CaptainJulie Youngman agrees with Smith that the tough games early will pay off.

“It was frustrating obviously. No team wants to be on a losing streak, but if we win the conference and go to the NCAA tournament, we will see teams with that level of intensity,” said Youngman.

Despite having a losing record early, Smith is confident in his team’s ability to perform well in conference play.

“The beginnings of the seasons have usually been pretty tough on us, but then we turn it around in conference play,” said Smith.

The team’s goal is to play aggressively and continue attacking the goal instead of packing the defensive third playing defense. Generating opportunities is important especially against the better teams they have been playing. Smith believes the experience their offense gets from creating goal-scoring opportunities will help when they play a team that lacks the same level of defensive ability.

Youngman led the team in goals (21) and points (52) and was one of four players to play in all 20 matches in the 2017 season. Youngman is a player to watch out for this season. She is a perfect example of how Smith wants to run his offense. In non-conference play this season, she had five goals and three assists. Youngman’s performance is why she has been named team captain two seasons in a row.

“I am always looking to improve myself,” she said. “We focus on always setting that tone and level of intensity at practice and games.”

Marywood is facing some disadvantages with injuries, but nothing that significant. The team only lost two seniors this season, so they return the core group of players that made a CSAC championship run last season. The coaching staff and senior players have been helping get the new players up to speed on how they run their offensive program in a faster-paced, more physical college game.

There is always change as the season progresses, but Smith’s confidence in his team’s capability of creating opportunities and playing good soccer is steadfast. He sat with his team and explained, “This is the start of a new season.”