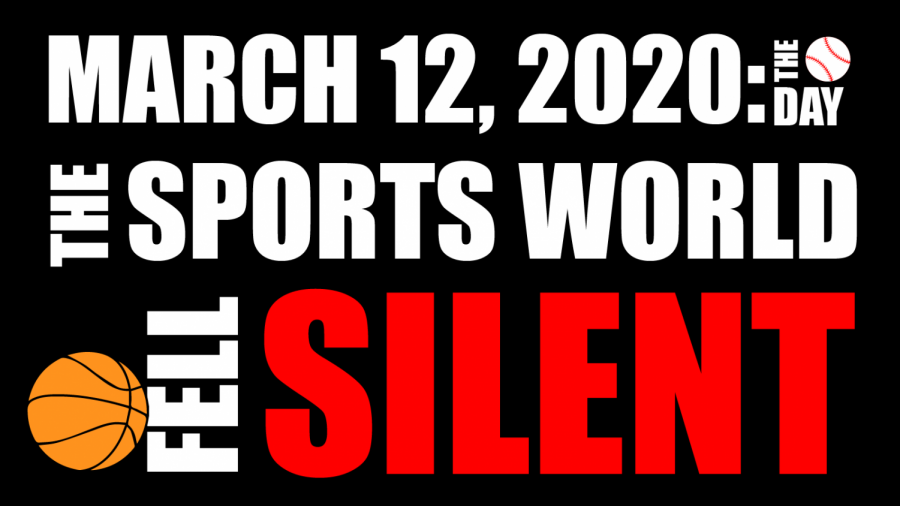 The National Basketball Association (NBA) and National Hockey League (NHL) season are both suspended. The NCAA March Madness tournament is cancelled. Major League Baseball (MLB) Opening Day is pushed back until at least May. The Players Championship and Masters golf tournaments are postponed. I don’t need to continue. You get the point by now. The last time the sports world suspended games for world events was in 2001, following the terrorist attacks on September 11, but there has never been a stoppage of every sport like this, not even during World War II.

I have been a sports fan for as long as I can remember and I have seen some sad moments. The NBA lockout of 2011, the 2011 NFL Referee Strike and the NHL Lockout of 2012-13 are just a few. I was not around yet in 1994 when MLB players went on strike and there was no World Series for just the second time since 1903. These events pale in comparison to the events that took place on March 12, 2020.

The night before, March 11, I was working with Blue Ridge TV 13 at Reading High School for the Pennsylvania Interscholastic Athletic Association (PIAA) second round state boys basketball playoff game between Panther Valley and High School of the Future. That game was the last of a triple-header for the night.

That was the first domino to fall.

There had been speculation in days prior that there would be some big changes coming in sports. College basketball conference tournaments began to be cancelled, some teams said they wouldn’t let fans into games and MLB considered location changes for a few teams.

The following day, many other leagues followed in the NBA’s footsteps. The New York Post made a timeline to mark the events of the day, with all times listed in Eastern Daylight Time (EDT). Just after midnight, the NBA G-League suspended its season. Following Rudy Gobert’s positive coronavirus test, the league ordered tests to be given to every Jazz player and locker room employee.

The only positive test came from all-star Donovan Mitchell. Gobert was, according to ESPN’s Adrian Wojnarowski, “careless in the locker room, touching other players and their belongings.” In addition, he was caught on camera intentionally touching all the microphones after his press conference days before his positive test.

Just after 11:30 a.m., the National Football League (NFL) told most of its staff to work from home and avoid traveling unless it was absolutely necessary. Ten minutes later, Major League Soccer (MLS) suspended its season for a minimum of 30 days. After another ten minutes, the NHL followed suit and suspended its season indefinitely. By 1:09 p.m., all of the Power-Five conferences had cancelled their men’s and women’s college basketball tournaments. After playing one half of basketball at Madison Square Garden in New York, the Big East cancelled the remainder of the St. John’s-Creighton game as well as the rest of the tournament.

At 1:41 p.m., MLB Commissioner Rob Manfred announced he was cancelling the remainder of spring training games and practices as well as delaying opening day by at least two weeks. At 4:16 p.m., the NCAA cancelled all remaining winter and spring sports championships, including the NCAA Men’s and Women’s Basketball tournaments, also known as March Madness. Three hours later, the XFL called off the remainder of its inaugural season.

Finally, just before 10 p.m., the PGA Tour said the remainder of the Players Championship, along with all events through April 5, would be cancelled. The PGA would announce the following day that the season’s first major championship, the Masters, would be postponed.

I decided to let the dust settle a bit this week before sitting down to write this article to process what this really means for the world of sports. It’s really sad to turn the TV on and only see old 30 for 30 films on ESPN or MLB Network talking mostly about the launch of the video game “MLB The Show 20.” I am still trying to process the fact that there will likely be no sporting events played for at least the next month and it could be even longer if the coronavirus outbreak continues to get worse. The last week has been difficult for me as a sports fan but I know that the safety of everyone is what matters most.

With most sports seasons being suspended or cancelled, arena and stadium employees are going to be without work and their pay for a while, but players and teams are beginning to step up and help these people. Dallas Mavericks owner Mark Cuban was the first owner to pledge to pay his arena employees. Soon after, some players such as Giannis Antetokounmpo, Zion Williamson and Kevin Love, along with other organizations, pledged to pay their employees so they can still support their families in these difficult times.

After the NCAA decided to cancel its winter and spring championships, spring sports athletes across the nation began to worry about losing a year of playing eligibility. A petition started asking the NCAA to grant affected players another year of eligibility and over 295,000 people have signed it at the time of writing. The NCAA granted players their wish the following day, March 13.

Not much is changing with the NFL as of now. Since the league is in its offseason, there aren’t any games to suspend. Free agent and trade negotiations can be conducted over the phone so there really isn’t much to hold up. The NFL should continue to conduct a somewhat normal offseason.

The disease affects sports at all levels, not just professionals. High school and college seniors who were looking forward to one more season to compete this spring saw their careers come to an end sooner than they expected.

As a college athlete and a senior to boot, I was disappointed to see my last season come to an end, but I understand the why after seeing how bad this epidemic has become. In time, hopefully this virus will run its course and fade away, much like H1N1 (Swine Flu) did in 2009.

This is a sad time for sports, but the coronavirus is a serious pandemic. The virus continues to spread and claim more lives every day. Doctors and government officials are working around the clock to defeat this virus. President Trump declared a National Emergency last Friday to limit interactions among people and thus contain the virus. Grade schools and colleges across the nation have shut down and some are moving to online schooling, including Marywood.

Rest assured, everyone. This is not the end of the world and we will get back on our feet. There will be sports again. We just have to be patient. Stay safe.