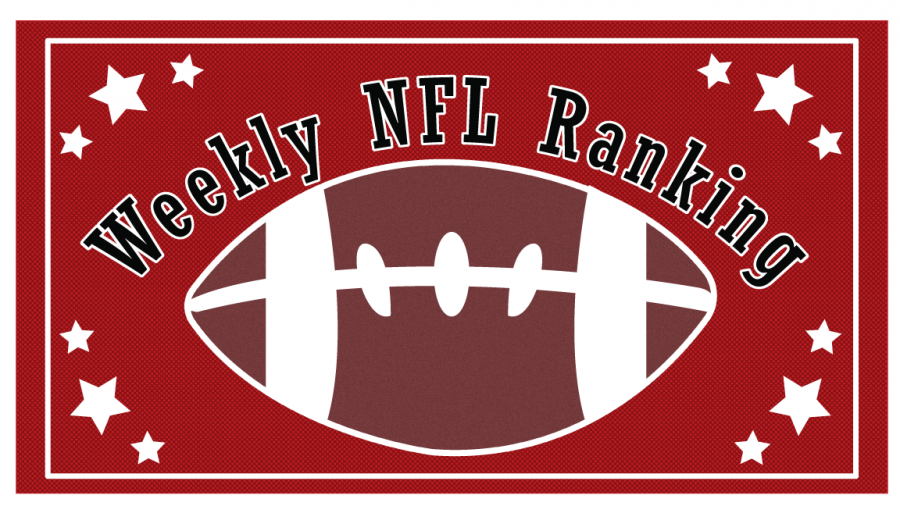 The Packers' week at number was short lived as the Chiefs' moved back up to the top spot.

This week’s rankings saw the chief’s making a comeback. Here are my latest top 10 teams rankings:

1. Kansas City Chiefs (5-1)
The Chiefs bounced back and defeated the Bills 26-17. In a rainy game the Chiefs relied heavily on the run game. Clyde Edwards-Helaire had 161 rushing yards on the day. The Chiefs defense also shut down Josh Allen who had a hot start to the season. Leveon Bell is also the newest addition to the Chiefs who is looking to prove that he’s still got it from his days in Pittsburgh. The Chiefs can run or pass all over a team. The defense is also able to hold their own which gives them the number one spot this week.

2. Seattle Seahawks (5-0)
After dropping down to the number three spot last week the Seahawks are back in at number two. Russell Wilson for most is the clear choice right now for MVP. Seattle’s great offense is looking to add Antonio Brown in the coming weeks which if he is anywhere near his Pittsburgh days will be a great addition. The only problem with Antonio Brown that could be concerning is what he could do to that locker room. The offense is able to compete with anyone, but I’m not sold on the defensive side of the ball for this team.

3. Baltimore Ravens (5-1)
The Ravens climbed from the number four spot to number three this week. The Ravens survived a late comeback against a desperate Eagles team 30-28 in week six. The versatility of the Ravens offense is their biggest strength. Their run game is clearly one if not the best in the league, while their air attack when called upon can get the job done. Their stout defense just added Yannick Ngakoue who will solidify them as a top-three defense for the season. The biggest problem for the Ravens is the ability to play from behind. It starts with Lamar Jackson who tends to not perform as well when not in front. Despite that there’s very little teams that have the ability to outscore this explosive offense.

4. Green Bay Packers (4-1)
The Packers’ time at number one was short-lived after falling down to number four. The Packers suffered a tough loss against the Buccaneers in week six. This game had flashbacks to last year’s NFC Championship game when the Packers were slashed. I don’t think it’s time to overreact just yet, and neither does Aaron Rodgers who said this is a wake-up call. At this point in his career, it’s not smart to doubt Rodgers and I will not be doing that. What I will be questioning is the defensive side of the ball. This was the downfall for the team last year and up to this point, they were playing good football. The Packers are still a top-three team in the NFC going forward.

6. Tennessee Titans (5-0)
This was a great week for the Titans, but not great enough to hold onto last week’s number five spot. The Titans won a thriller in overtime against the Texans 42-36. Another week of a great offensive performance from the Titans. Ryan Tannehill threw for four touchdowns and is quietly making his own case for MVP. Derrick Henry also had a 94-yard touchdown run and a total of 212 yards on the ground. A huge blow to the offense is the loss of left tackle Taylor Lewan for the rest of the season. The Titans defense has some cause for concern giving up 30 plus points in three games this season. The Titans have a huge prove it week coming up against the undefeated Pittsburgh Steelers.

7. Buffalo Bills (4-2)
The Bills are holding on steady to the number seven spot but they may change. Two straight losses for the Bills as they lose to the Chiefs in week six. After a great start, Josh Allen is starting to struggle. To be fair the Bills have lost to two great teams but they have high expectations for the season and these are games they need to win to make those expectations. Allen needs to pick up his play for this team to compete as evident in the first four weeks.

8. Tampa Bay Buccaneers (4-2)
The Buccaneers’ performance this week helped them land the number eight spot. The Buccaneers laid a beat down on Green Bay Packers this week 38-10. This was a statement game for the Buccaneers after losing to Chicago in week five. This roster is loaded with talent. It is just a matter if they can be consistently good from here on. Todd Bowles’s defense played an excellent game and seem to be coming into their own. This defense may start causing problems for the rest of the league. Tom Brady is obviously past his prime but is still able to command his teams to the finish line. The Buccaneers are now starting to get their name back into a deep playoff run at the end of the season.

9. New Orleans Saints (3-2)
This week saw the Saints holding on to the number nine spot. The Saints had back-to-back wins heading into their week six bye. This team is not the Saints of old, but I feel if they can get Michael Thomas back into rotation it would lift this offense up. If this offense can get clicking again they could very well be back in shape to win this division and maybe make a run for a Super Bowl with the clock ticking on Drew Brees’ career.

10. Chicago Bears (5-1)
A win is a win. That is what the Chicago Bears have exemplified this season. The Bears have been fighting and clawing their way through their five wins this season and now see themselves atop the NFC North. This team has shades of the 2017 Eagles led by Nick Foles and the togetherness that group had. The chemistry and trust is obviously growing within the locker room for this team. Khalil Mack has once again put his name into the defensive MVP talks. With a great defense and an offense that can get the job done, Chicago is for sure making a name for themselves this season.