Our Opinion: Looking back to move forward 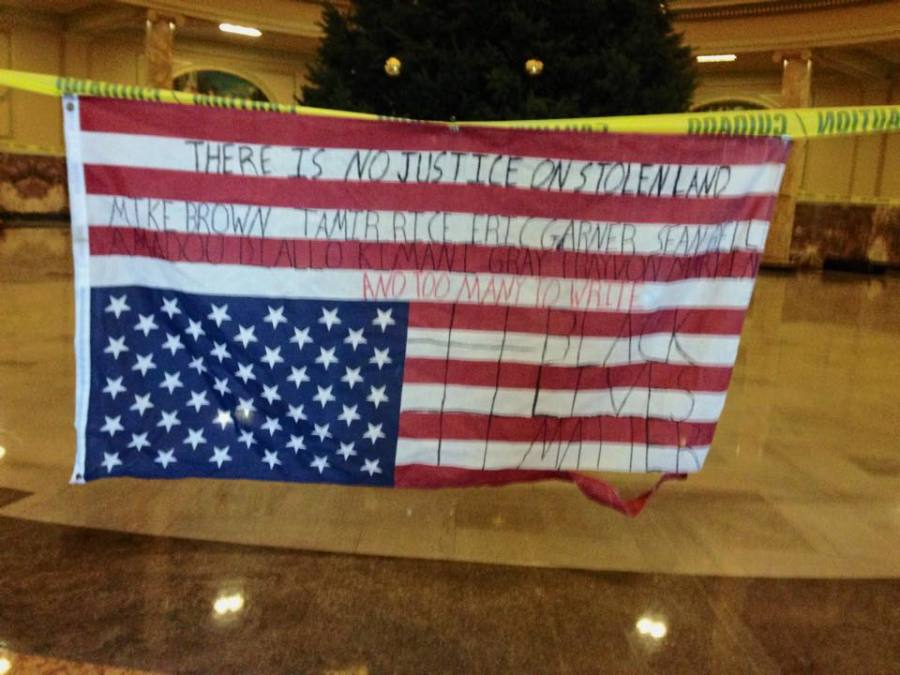 The U.S. Flag hangs upside down and written upon in the photo that sparked the controversy.

Earlier this week, a group of students organized a peaceful protest in response to the decision by a grand jury in St. Louis, Missouri, that failed to indict police officer Darren Wilson in the shooting death of Michael Brown.

The student protesters laid on the floor of the Rotunda, some with signs attached to themselves. One protester hung a United States flag upside down with the words “There is no justice on stolen land,” the name Michael Brown, and #BlackLivesMatter written on it.

Though the University allowed the protest to continue, Campus Safety asked the student protester to remove the flag. The student complied without incident.

The Wood Word, in its continuing coverage of campus news, posted photographs of the protesters and the flag to its Facebook page.  The post generated a torrent of comments from students, alumni, and members of the Facebook community.

Shortly thereafter, Sr. Anne Munley, I.H.M., Ph.D., president of the University, issued a statement to the media, detailing the University’s official response to both the protest and the desecration of the United States flag.

“Marywood University understands our students’ first amendment rights to freedom of speech, peaceable assembly, and freedom of the press,” Sr. Anne said in her statement, “but we abhor the desecration of the United States flag.”

“The desecration of the United States flag” has garnered the most media attention in the past few days; but there are so many other things in need of more urgent attention.

Here is a list of things that are more shameful than the defacing of a United States flag.

That we live in a country where, in 2014, the justice system still doesn’t treat everyone equally.

It is unclear how culpable Michael Brown was in his own death, without any sort of video evidence of what happened that day. But, based on the video evidence of the death of Eric Garner, the lack of an indictment of the New York City police officer involved is an injustice. And Garner’s death and lack of justice is indicative of broader issues in American culture, where the justice system works unfairly against marginalized groups.

That many in the community lack a fundamental understanding of the rights afforded to all Americans by the First Amendment.

Numerous commenters have pointed to a Pennsylvania state law that makes the desecration of the flag a misdemeanor offense. However, according to Supreme Court precedent set by the 1989 case Texas v. Johnson, state laws such as these are unconstitutional, as they are effectively limiting the freedom of speech afforded by the First Amendment. Many commenters were calling for the arrest of the protesters, when they did absolutely nothing illegal. The lack of knowledge people have of their own freedoms is worrisome.

That people think protesting and desecrating the U.S. Flag is un-American.

Protest is one of the most patriotic things an American can do. The flag is a symbol of freedom; the flag, and the freedom it symbolizes, gives protesters the right to speak out against injustice in order to make their country a better, freer, more equal, place. That freedom includes writing on or burning a flag in protest.

That veterans who dared to speak up in support of the students and their actions were vilified, often by other veterans.

Perhaps the most ironic elements of the comments on the Facebook page involved the First Amendment and veterans. Many people were criticizing the protesters for insulting the flag, as many soldiers had fought and died for it. What seems to have been forgotten is that the flag belongs to all Americans, not just to those in the military. When a few veterans stepped in to say that they fought for Americans to have the right to express themselves under the First Amendment, those veterans were criticized for being too soft on the protesters.

That people have lost any sort of ability to hold rational discussions on the Internet, and instead turn any debate into a mudslinging, name-calling, and in some cases, threat-issuing competition.

Based on the comments that have been posted on The Wood Word’s Facebook page, it would appear that people on the Internet totally abandon any shred of critical thinking and civility in favor of ineffectual vitriol.

That Marywood believes “the desecration of the United States flag” goes against its mission and core values.

Marywood University, in its mission statement, says that it “roots itself in … the principle of justice.” If this is true, Marywood should be more inclined to stand behind the protesters.  Some commenters said that as a Catholic organization, the protesters’ radical actions went against the Catholic mission of the school. But as Chris Kelly, columnist at The Times-Tribune, said, Jesus himself was a radical. So, it seems backward to claim that the Catholic Church and Christianity as a whole don’t have a history of radical expression and support of marginalized groups.

Another element of Marywood’s mission statement is that the University seeks to “educate global citizens to live responsibly in an interdependent world.” Part of this sense of interdependence will come from learning to respect each others’ ideas.

It is impossible to suggest that students will always agree with each other; that will simply never happen. But, regardless of whether we agree, we must retain a level of respect. After all, that is another of our core values.

A college campus is, perhaps more so than any other part of American society, a marketplace of ideas. It is a place that allows for students to learn about society and their own interactions with it. There will be missteps along the way, but it is essential that students retain the ability to learn and to express themselves freely.

The issue of the flag in the Rotunda is one that is likely to stick around for some time. As the Marywood University community heals the rifts that have been caused, it will need to seriously reflect on the above points.

Americans are going to need to ask themselves what is more abhorrent: the desecration of a flag or the possibility of not having the freedom to speak their minds and stand with those who fight against injustice?

The latter is far more abhorrent.