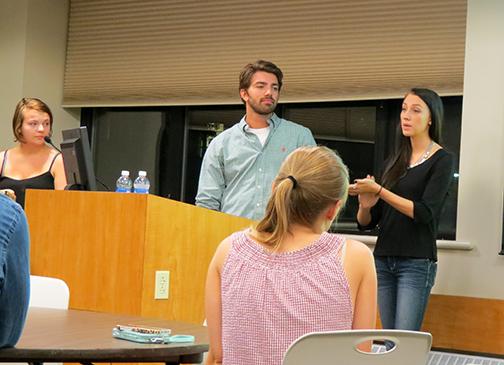 In this file photo taken on Sept. 3, Melissa Kowalski, President of the Student Government Association, addresses the attendees of the year's first meeting held in the Swartz Center.

The Student Government Association (SGA) is starting a new academic year faced with a 25 percent cut to its annual budget.

SGA held its first meeting of the semester on Sept. 1 at 9 p.m. and discussed ways to ensure the continued success of the organization despite the cut.

“I was notified within the first week of August that our budget would be cut,” said Melissa Kowalski, president of SGA. “It was cut substantially and we were told to be fiscally responsible. We were assured that student functions would not be affected by budget cuts; we will have the same amount of functions for students.”

While Kowalski would not disclose the exact budget figures, she said that losing a quarter of a budget comes with challenges.

“SGA gets a budget every year and members of SGA vote where the money goes to,” said Kowalski. “SAC [Student Activities Crew] creates events and SGA funds them.”

The announcement about the budget cuts, which Kowalski made at the meeting, came on the heels of the flyers distributed around the Rotunda earlier the same day. The flyers contained information pertaining to Marywood’s current financial state. While the exact origin of the flyers is unknown, the flyers caused a stir within the Marywood community.

“The facts [on the flyers] were very drastic,” said Kowalski. “We are currently contacting university officials to get more information.” Kowalski agreed to speak further about the information on the flyers at a later date.

SGA’s first meeting served as a basic introduction to what SGA is and how the club works.

The meeting was led by the Executive Board of SGA, which is comprised of five positions. Officers include Kowalski, a junior international business and Spanish major; Vice President Austin Collignon, a senior CSD major; Secretary Jenna Edmonds, a sophomore art therapy major; and Public Affairs representative Jessica Martin, a junior nutrition and dietetics major.

SGA is still in the early stages for planning events, but the group is very excited about potential projects. Some of those projects and goals include improving the development of new mascot, Mavis the Mustang, promoting SGA in student involvement and increasing communication between the university and students.

“We like to set goals for SGA,” said Collignon. “We have four committees within SGA that work to achieve these goals. The reason we do not have only one committee is to ensure that we accomplish as much as we can. We want any problems to become goals that we can fix.”

Students are encouraged to come to attend all SGA meetings to voice their concerns. After attending three meetings of SGA, a student has voting rights in elections.

We’re always looking for people to come and voice their opinions,” said Edmonds. “What we’re hoping for is more communication between faculty and students. We’d really like more awareness around school.”

Martin said that she was excited about the attendance of the first meeting. “It’s nice to see a lot of people involved,” she said. “I saw a lot of freshmen tonight. We usually have 30 to 40 people attend, but we would love to see that number increase.”

SGA meetings are held every other Tuesday. A comprehensive list of meeting dates can be found on the SGA page of Marywood’s website. The next SGA meeting is on Sept. 15 at 9 p.m. in the Conference Room B of the Schwartz Center.