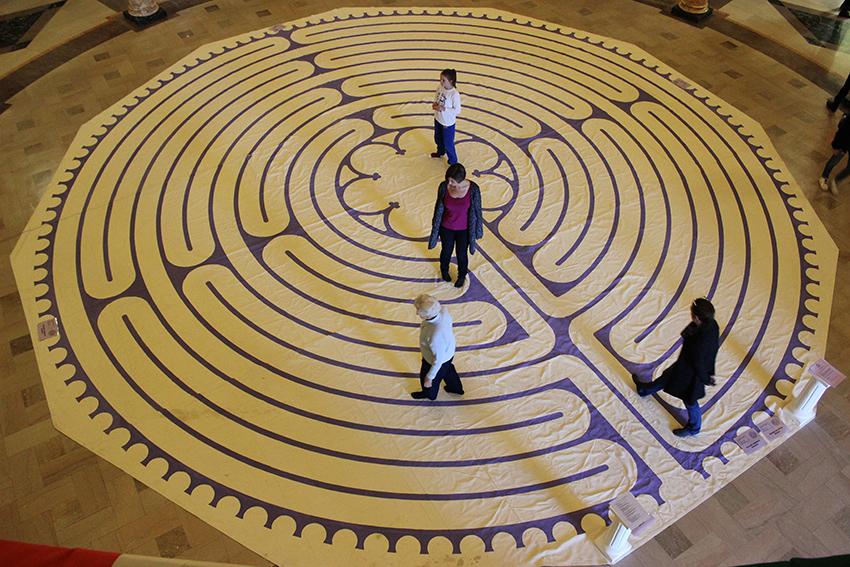 A cloth labyrinth on the floor of the Rotunda was available for community members to walk on from Mon. Nov. 16 until Sat. Nov. 21.

In addition to the labyrinth, 24 flags from countries around the world encircle the Rotunda in honor of International Week.

“The labyrinth belongs to Marywood University,” said Sr. Catherine Luxner, IHM, director of Schwartz Center for Spiritual Life. “It’s one of the events for the Centennial, and we planned to have it for our spirituality.”

The labyrinth provides a good opportunity for students to meditate, especially in light of recent terrorist attacks in Paris.

“We planned for the labyrinth to be put out this week,” said Sr. Catherine. “The placement does coincide with the Paris attacks, which is good because the labyrinth can be used for what it was planned.”

The labyrinth is a replica of the Chartres Cathedral labyrinth in Chartres, France. That labyrinth originated in 1210 with the purpose for those who walk on it to do so as a spiritual pilgrimage.

The first recorded origins of a labyrinth can be traced back to the Greek legend of King Minos of Crete, who offered sacrifices to a Minotaur in the center of a massive labyrinth. While originally a symbol of hopelessness and fear, Christianity adopted the symbol as a form of hope and enlightenment.

The point of a labyrinth is not to get lost but to reach the center. There are several entrances into the labyrinth that all lead to the center and back out once again.

The labyrinth is lined in purple with white as the background and is in the shape of a dodecagon, which is a circular shape with 12 sides. Two white pillars hold the labyrinth in place and have purple fliers with information about the labyrinth on them. Participants are asked to remove their shoes and respect silence while walking the labyrinth.

Grad school student Harb Almarri was at first unsure what the purpose of the labyrinth was, but was initially happy to see his country’s flag.

“I like my country’s flag and how big it is,” said the Saudi Arabian native. “It’s a pleasure to see all the countries united at once.”

Upon reading the purple fliers about the labyrinth, Almarri said he agreed with the purpose of the idea.

“As the flier said, we can find a place for meditation and prayer,” said Almarri. “This is the American Dream: to make united the world and make peace everywhere.”

Religious studies adjunct professor Bryne Lewis walked by the labyrinth and reflected on the purpose of it.

“I think it’ a really great idea,” said Lewis. “I’m thinking about taking my class here since we’re talking about different religious practices and modernity.”

In light of the recent terror attacks on Paris, Lewis pondered the importance of a quiet place.

“It’s very healthy to have a discipline that allows us to process rather than intake,” said Lewis. “The labyrinth provides a space to process, and can allow people to at least approach a sacred space.”