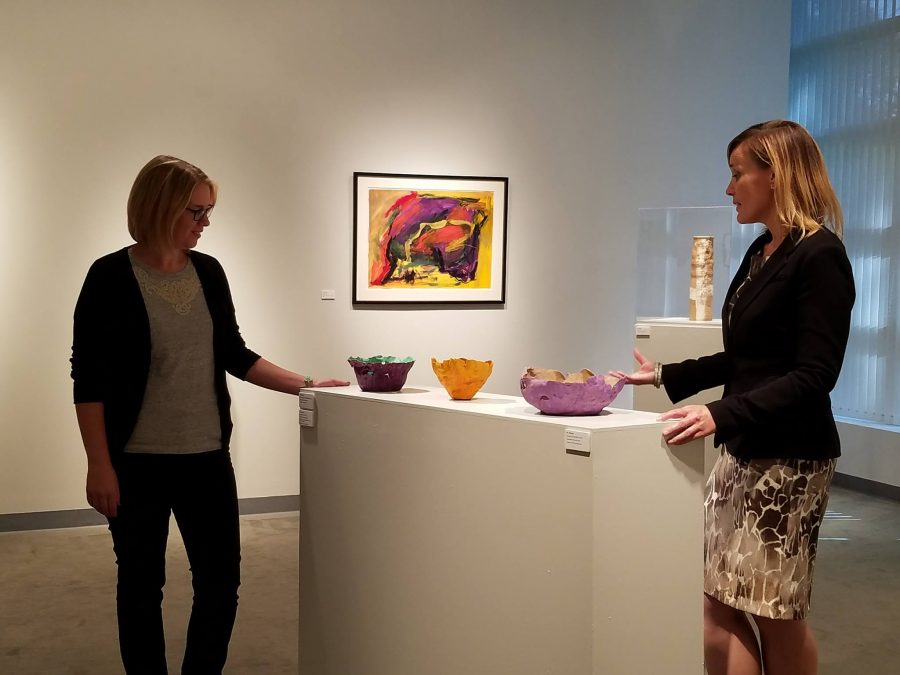 A new school year brings a fresh start and plenty of transitions on campus. Taking part in this transition phase are two new art gallery directors.

Irwin and Christianson have both taken on the role of Interim Assistant Directors of Art Galleries.

The previous director, Sandra Povse, left in August. She has already planned the shows for the next year aside from the M.F.A. and M.A. shows, so Christianson and Irwin are just implementing these planned shows.

Christianson’s undergraduate degree is in art studio and art history, so she saw this open position as an opportunity to use her background to support Marywood through this transition period.

Christianson said that she is balancing her multiple roles at the university, but she had to give up one of her liaison areas in the Social Work Department.
“Now that I’m over here in the galleries, I’m focusing on art and architecture,” said Christianson. “I eventually hope to add communications.”

As User Services and Copyright librarian, Christianson said she has done library-related instruction sessions with some of the communications faculty in the past and hopes to work with them again within the next couple of months.

This is just Dr. Irwin’s second year at Marywood. This year, she’s focusing on tying her jobs as assistant professor and director of art galleries together.

“Nothing has changed much,” said Irwin. “I have one less course that I’m teaching each semester. So it’s not a massive impact, it’s just a lot of juggling. It all obviously works well together because art history marries nicely with art galleries.”

Though Irwin and Christianson both have a lot on there plate, they seem confident in taking on their new responsibilities.

“This year, we’re installing the show, setting it up, and receiving everything,” said Christianson. “We’re going through the process of learning how it was done – how they marketed the shows, how [the previous director] would reach out to the community, seeing what was done in the past and what we want to do in the future.”

Irwin shared that they have two significant goals for the galleries.

The first goal is to bring external art into the galleries to create an artistic and cultural presence on campus.

The second goal is to make the galleries a place where Marywood students can exhibit their work. There’s a mandate that graduating seniors, as well as graduating M.A. and M.F.A. students, show their work in a gallery.

“It’s sort of about planning a series of exhibitions that accommodate both of those goals,” said Irwin.

Irwin also mentioned that there is a permanent collection located upstairs that not many people know about, likely due to its odd location.

“It’s just in the middle of the building where there are classrooms. It’s kind of tucked back there,” said Irwin. “It’s not chronological or by artist or anything. It’s like [a] Chinese vase next to a European 17th Century Print next to a chair that was made in the 19th century. So it’s this great amalgamation of all kinds of crazy things.”

Irwin added that the hidden collection is open to everyone on campus.

“It’s fairly extensive and really varied. It’s open all the time to anybody who wants to come see it,” said Irwin.

Irwin added that they also want to make more of an impact through social media as well as letting faculty, staff and students know that the gallery is a space for them to use.

“[The gallery] is a part of Marywood and they have every opportunity to be a part of it and interact with it,” said Irwin.

Some other future plans for the galleries include a feminist art show, growing the Arts Administrations Program, getting on the map for First Friday and reaching out to major art areas, such as New York and Philadelphia, to try to bring some of that work to campus.

Their first show opened on Sept. 10 in the Mahady Gallery of The Shields Center for Visual Arts. The “M.C. Richards, Centering: Life + Art, 100 Years” exhibit will be on display through Oct. 26.

They did not have an opening reception for the show, but there was a gallery talk led by Curator of the Maslow Collection, Bob Schweitzer, on Wednesday, Sept. 21 at 3 p.m.