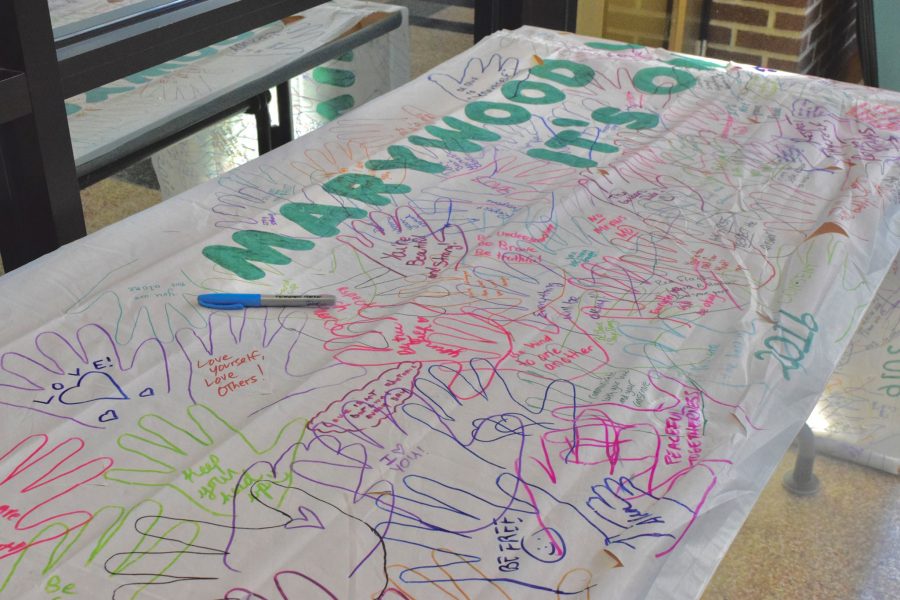 As part of the national “It’s On Us” movement, Healthy Relationships Week began on Monday to spread awareness of sexual assault and relationship violence.

The Marywood Counseling/Student Development Center, as well as campus groups Peers on Wellness (POW!) and the Relationship and Empowerment Task Force (RAE) teamed up to sponsor the week-long campaign.

From 11 a.m. to 1 p.m. on Monday, members of all three organizations sat at a table in the McGowan Center for Graduate and Professional Studies and handed out flyers describing the warning signs of abusive relationships and sexual assault statistics, as well as information about the mission of “It’s On Us.”

Melissa Gericke, a senior in the Master of Arts program in mental health counseling, discussed the importance of “It’s On Us.”

“The main reason I think it’s important is because of the current political situation we’re in,” said Gericke. “I think gender role socialization impacts how we form partnerships with people in heterosexual relationships.”

She referred to the sexual assault allegations made against president-elect Donald Trump during the 2016 presidential election cycle.

During the event, students signed the “It’s On Us” pledge, which involves recognizing what constitutes sexual assault, identifying where it may occur, intervening in situations related to it and creating an environment that supports survivors and acknowledges sexual assault as unacceptable behavior. Participants received a green ribbon pin to signify that they signed the pledge.

Passersby had the opportunity to trace their hand and write a positive affirmation inside of it on the “It’s On Us” banner, as well as write a heart-shaped note to place in a jar that the groups plan to send to a women’s advocacy center. 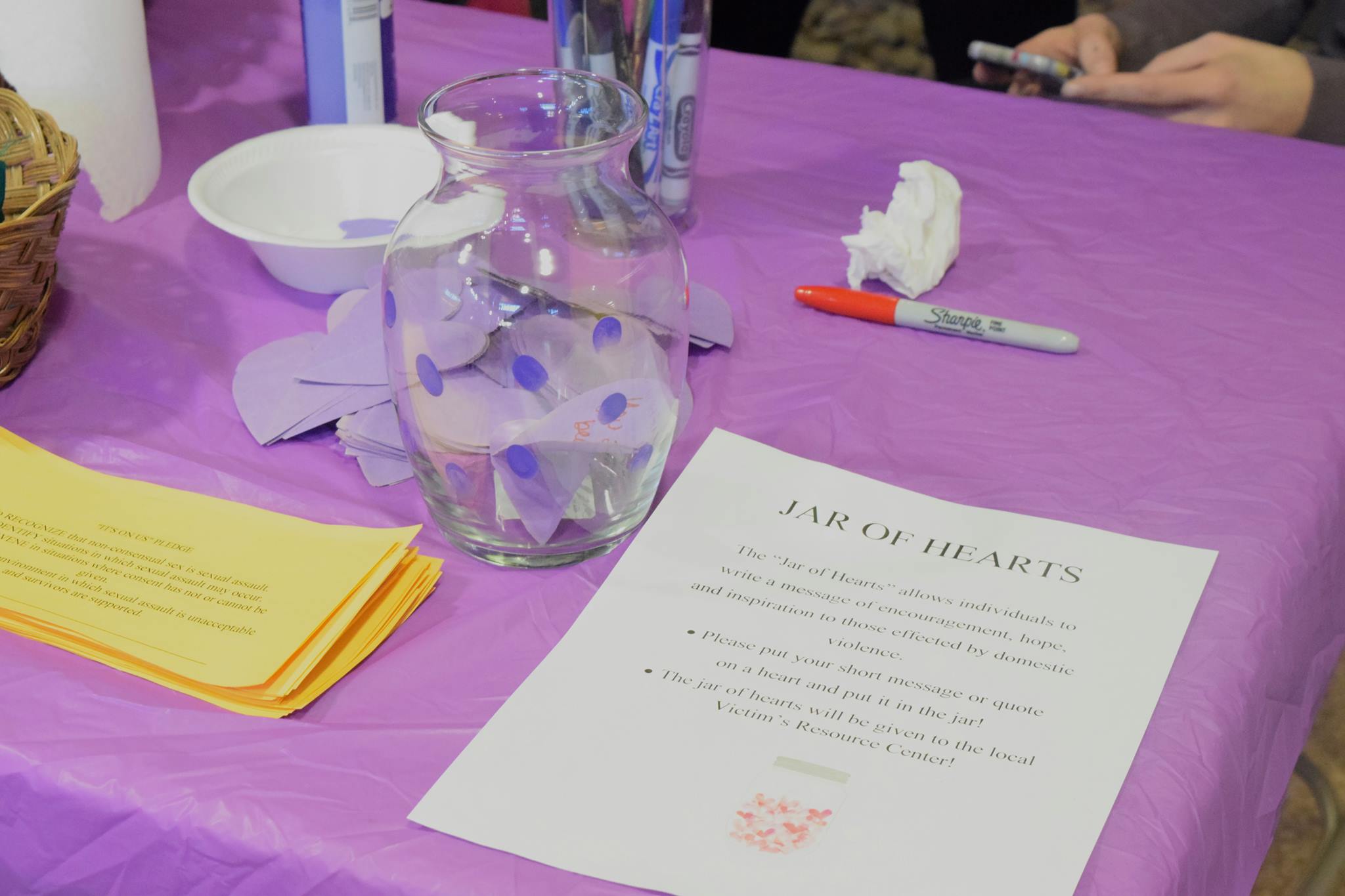 The event featured an Instagram photo frame with the hashtag #ItsOnUs for participants to take photos in and spread the word on social media while students handed out free bracelets that said “ask first” and “respect the answer.”

Monday also was the start of the “Red Flag Campaign” in front of the Learning Commons. The red flags represent warning signs of dating abuse such as isolation, coercion, stalking and more. 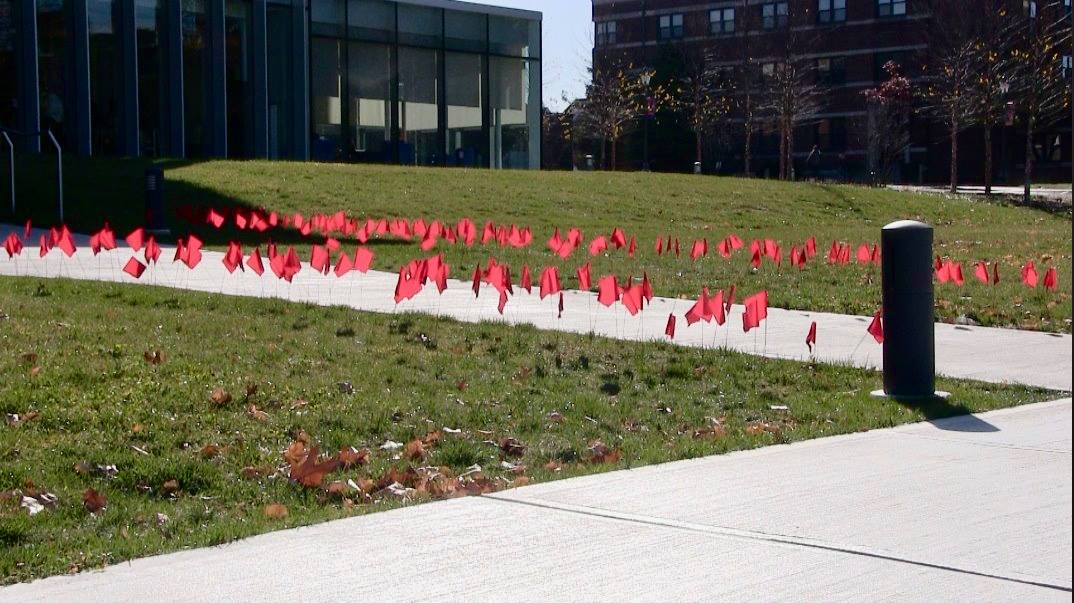 On Tuesday, there was a screening of the documentary titled “The Hunting Ground,” which was about sexual assault on college campuses and included a panel discussion after the screening.

With universities in the documentary often “brushing sexual assault under the rug,” Kelsey Abbott, a clinical psychology doctoral student, said the groups plan on pushing the importance of Title IX at Marywood this week. Title IX of the Education Amendments Act of 1972 prohibits discrimination on the basis of sex in educational programs and activities.

“If someone brings about an allegation, Marywood is fully supportive and they will do whatever they can for the survivor, as well as if something needs to happen, like suspending a perpetrator,” she said. “I think what’s cool with Marywood is that they’re not about hiding it. They’re very up front with their statistics on how many assaults have happened on campus or off-campus.”

At 11:30 a.m. on Wednesday, Dr. Lia Richards-Palmiter, Edward McNichols and Maria Temples facilitated a “Talk of the University: What You Should Know” in the Nazareth Student Center Upper Main Dining Hall. The discussion focused on rape culture and gender roles. Later tonight, participants of Healthy Relationships Week will speak about the movement in the pep rally held in the gym.

On Thursday and Friday, Marywood athletes plan to put on an “It’s On Us: Change the Conversation” photo display to continue raising awareness of the movement.

“I think [sexual assault] is something that is so rampant in the country right now… it’s just something that needs to be brought to people’s attention,” Abbott said. “I feel like people who engage in this activity feel like they have an easy pass, or they blame it on alcohol [or] parties… There just needs to be awareness brought to how it’s not OK and it’s not appropriate.”