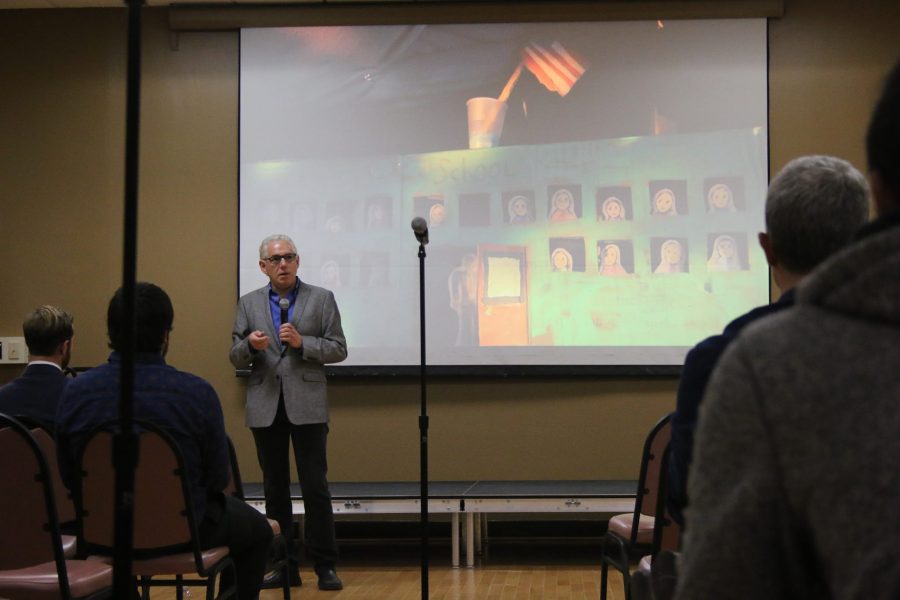 Robert May speaks after the screening

Director and producer Robert May visited Marywood University on Thursday, Nov. 17 to discuss his documentary “Kids for Cash” that focuses on a 2000s scandal of the same name.

Dr. Lindsey Wotanis, associate communication arts professor and director of the broadcast journalism program, invited May to discuss the film with her Electronic Storytelling and Documentary class as well as the Marywood community in the Latour Room of the Nazareth Student Center.

The 2008 scandal rocked Northeastern Pennsylvania and eight years later, the Marywood community gathered to talk about shocking events involving a greedy judge, defenseless children and the disturbing failure of the justice system. Attendees of the event also discussed how May created the film.

What is Kids for Cash?
The documentary focuses on unearthing the “kids for cash” scandal of the early to mid-2000s in Luzerne County, PA. Corrupt Wilkes-Barre Judge Mark Ciavarella sent around 3,000 teenagers and pre-teens to a for-profit juvenile correctional facility for minor infractions such as creating a false social media account and swearing.

When the parents were notified of their children’s infractions, they were encouraged to waive their right to legal counsel. Many of the parents did because they were unsure of the severity of the situation. Having no legal counsel and a judge adamant on jailing children, most of the accused went straight to the detention centers.

The facility which Ciavarella sentenced the ‘delinquents’ to was one he co-founded with Judge Michael Conahan. Ciavarella received $2.2 million as a finder’s fee of the facility and never notified any of the accused parties of his personal ties to the institution, which is illegal.

First elected in 1995 for a 10-year term, Ciavarella spoke to students in schools throughout Luzerne County annually, warning students that if they behaved badly, Ciavarella would “lock them up,” according to the film.

Following the wake of the 1999 Columbine tragedy, Ciavarella became more aggressive in his stance: less bad kids in schools, less chance of a mass shooting. People appreciated his “zero-tolerance” stance on juvenile crime and elected him for another 10-year term in 2005.

In the film, Ciavarella said that he “wanted kids to fear him” when they saw him. His trials were straightforward: Ciavarella would tell the accused their “crime,” ask if they committed the offense and then ask if the teenager was present on the day he visited their school. When the accused answered “yes,” they would be escorted out of the courtroom and into the juvenile detention center.

Eventually, word of his ‘justice’ spread, and Ciavarella was brought to trial. Though he was not found guilty of accepting kickback money for jailing the teenagers, Ciavarella was found guilty of racketeering, fraud, money laundering, extortion, bribery and federal tax violations and is in prison. Conahan is also incarcerated.

The Making of Kids for Cash
Following the film, May thanked attendees and Wotanis’ class for attending. Before accepting questions, he asked the audience how the film made them feel.

John Ferraro, a senior digital media major in Wotanis’ class, said he felt “mistrust in the justice system” while Christy O’Neil, a junior advertising and public relations ad hoc major and broadcast journalism major who is also in the class, said she “felt really bad for the kids.”

“[Without the judges’ stories] you see what you expect … it’s a flat story,” said May. “Once I got access [to the judges], I could make the movie.”

Much of the poignancy of the film came not from the scandal itself, but from the kids’ own testimonies. May thought the kids would talk largely about the scandal, but this was not the case.

“The first day of interviews … I never really was expecting the weight of those stories of those kids,” said May. “[All the kids] talked about was the moment they were shackled and jailed.”

For those who wish to pursue filmmaking or any other craft, May told the audience members of the importance of staying dedicated to one’s goal.

“You have to truly be interested in people to write a character story from scratch. You have to know the things [the characters] like and to accurately film them,” said May. “This film took years to make, but every day, I was interested.”

May advised people in the film industry to “listen carefully” and take constructive criticism as well as to understand there is an “army of people” involved in creating a film.

Dr. Michael Mirabito, chair of the communication arts department, attended the event and appreciated May’s willingness to talk to students about the art of filmmaking.

“[May] gave excellent insight to the [filmmaking] process. He was kind and gracious with his time with the students,” said Mirabito. “It’s all about starting somewhere and it’s great to have advice from an award-winning director.”