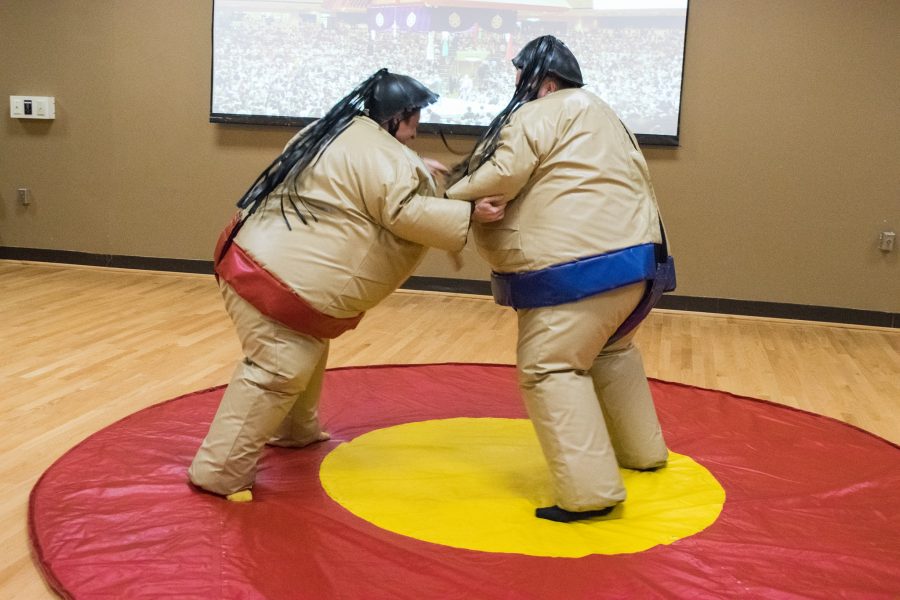 From 7 p.m. to 10 p.m., SAC members provided vegetable and chicken lo mein in takeout containers and cooked it in front of students in woks. Other refreshments were also available, such as green tea and fortune cookies.

Participants of “Cravin’ Asian” created their own Chinese lucky coin bracelets and folded origami at the activity stations. Additionally, students had the opportunity to put on inflatable suits and fight in sumo wrestling matches.

Posters around the room featured information for students to learn about the cultural traditions being practiced, including facts about sumo wrestling, Chinese Zodiac, dragons, origami and paper lanterns.

One poster described “Cravin’ Asian’s” main attraction, sumo wrestling, as an “ancient, dignified sport” and explained how it originated in eighth century Japan as a sacred tradition used to ensure bountiful harvests during planting seasons.

Nadine Burton, a junior nursing major and SAC member, saw the sumo wrestling as a fun way for students to take a break from school work.
“I think it’s a really good stress buster for everyone during finals week,” she said. “Just to go out there and pummel everyone.”

Burton said SAC decided to make Asian culture the focus of this event since some students from Asian countries go to Marywood. She believed the event had a “really good turnout.”

Last semester, SAC hosted “Fiesta Fun” to celebrate Latin American culture. According to Harm, they aim to incorporate these “culturally appropriate” events into their plans each semester.

“We usually try to do about two every semester,” Harm said. “We always do fun events, but it’s also good to have educational, cultural events.”

Katie Haczewski contributed to this article.