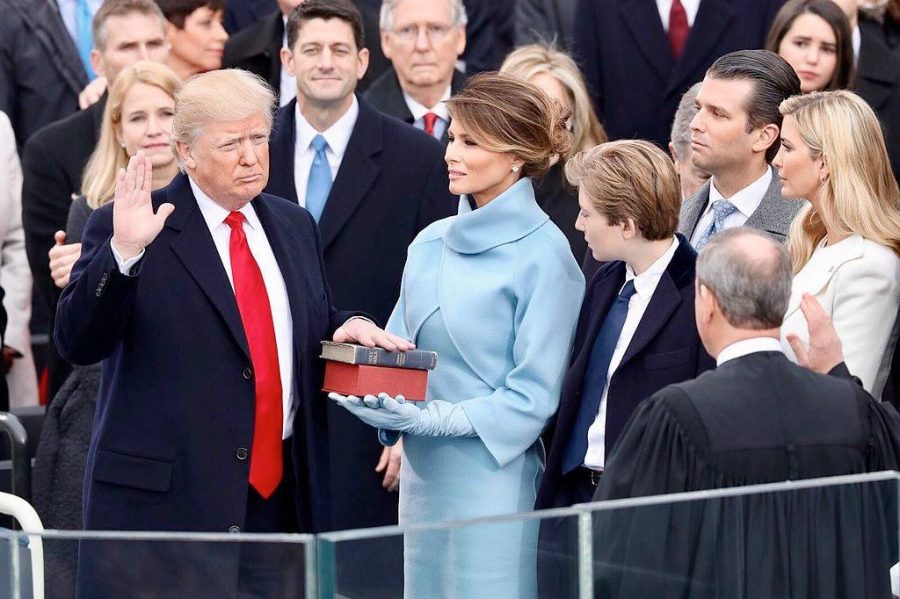 President Donald Trump being sworn in on January 20, 2017 at the U.S. Capitol building in Washington, D.C. Melania Trump wears a sky-blue cashmere Ralph Lauren ensemble. He holds his left hand on two versions of the Bible, one childhood Bible given to him by his mother, along with Abraham Lincoln’s Bible.

Donald Trump was sworn into the presidency just over one month ago. In his first month as president, Trump hasn’t held back, and his maverick personality and unorthodox ways haven’t changed.

Though the 12 executive orders  Trump has signed since his election aren’t record breaking—that honor goes to President Barack Obama with 16—they’ve no doubt had impact. While Trump has shown he’s a man of action, his presidency is ridiculous and shameful at best. The things Trump does and says make a mockery of the presidency.

After a district court blocked the executive order instating a travel ban, Trump responded via Twitter like a big, orange baby.

That’s just the tip of the iceberg. Here’s where Trump’s presidency goes from mildly frustrating to full-blown lunacy. 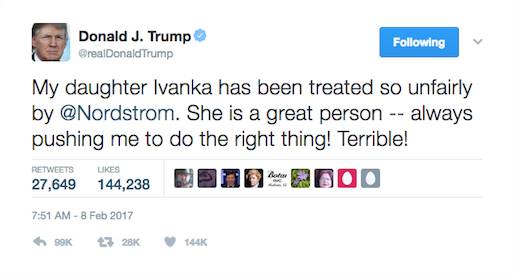 Trump’s cries of “it’s so unfair” were echoed by Counselor to the President Kellyanne Conway, who broke federal ethics codes and promoted the brand on live news. She literally said to “go buy” Ivanka Trump’s tacky products.

“I’m going to give a free commercial here,” said Conway, but she should have said, “what I’m doing here is totally not legal.”

Nearing the one month mark, Trump gracefully took the stage for an exhausting one-hour and 15 minute press conference last week. Normally, Press Secretary Sean Spicer would give the press briefing, but Trump decided it was his turn to yell at and spew false information to some journalists.

And oh boy, did he. He claimed he hadn’t made a phone call to Russia “in years,” despite the fact that he spoke with Russian President Vladimir Putin over the phone back in January.

He denied anyone else associated with him being connected to Russia, after national security advisor Michael Flynn resigned because of his connections to Russia. And even though all of this did in fact happen, Trump still called Russia fake news. Writing all of the other ridiculous things Donald Trump said at that conference would double the length of this article.

Rounding off Trump’s absurd first month in office was a campaign rally. Yes, Donald Trump was elected president in November, sworn into office in January, and by the end of February he already held a campaign rally for 2020. Nobody is even going to cast a vote for him, or any other candidate for that matter, for another three years. His big ego is so fragile that he feels the need to make sure people will vote for him. After he already won the election.

Since Trump is (probably) contractually obligated to say something outrageous whenever he gets in front of a microphone, he made up a story about “what’s happening last night in Sweden,” vaguely implying there was a terrorist attack in Sweden.

This should be obvious by now, but there was no terrorist attack in Sweden. Trump just shared some misinformation not supported by facts. It’s what his administration refers to as alternative facts.

Don’t believe everything President Trump says. It’s hard to imagine that the President of the United States is not a trustworthy source of information. He’d like you to trust him and believe that the “fake media” are untrustworthy. Don’t listen to him.

Keep following the news. Check the facts. And check in on this column in another month for more of President Donald Trump’s ridiculous presidency, because I promise you, it only gets worse from here.