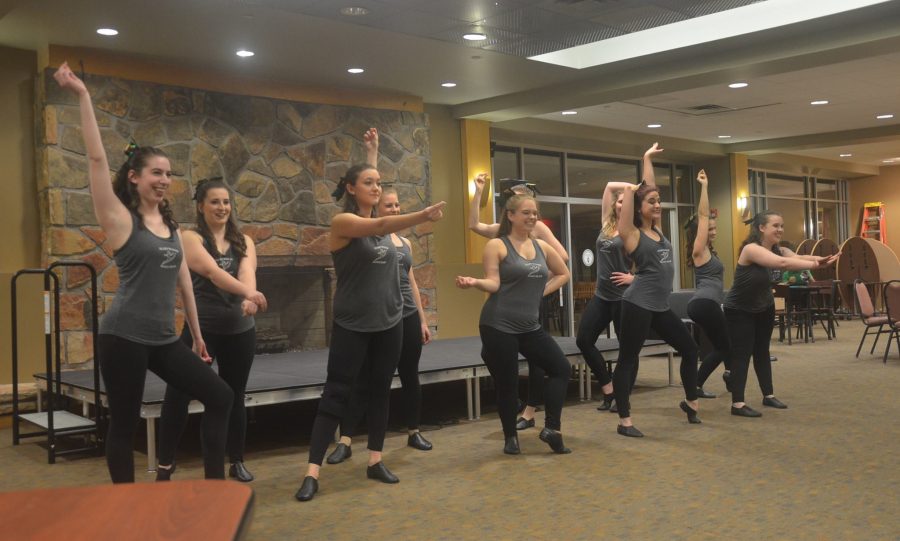 The Marywood Dance Team poses before beginning their routine.

Show me what you got.

That was the positive message from judges to open the SAC event Dancing with the Students Dance Battle on Thursday night in the Fireplace Lounge in Nazareth Hall.

Both teams and individuals competed for cash prizes by performing planned or freestyle dance routines before a panel of judges.

Both explained their reasoning for wanting to plan an event like this.

“I wanted to be able to involve other organizations on campus,” Kirkman explained. “So why not a dance competition? It’s kind of a new event that lets these teams show off their talents.”

Plate added that the dance battle stands out from other events.

“It’s one of those things people can use to get out of their shells, unlike maybe playing bingo, and it’s something that they can’t exactly do on their own private time,” said Plate.

Marywood’s Dance Team and Step Team were two of the three teams to compete during the first round with their rehearsed routines. A third team, The Third Place Team, who signed up during the event, performed their own rendition of the “Cha Cha Slide.”

During the freestyle rounds, individuals and pairs of dancers performed both choreographed and freestyle dance routines.

Batima Shagiyeva, a management information systems graduate student and member of the Step team, said she enjoyed performing in the dance competition.

“Performances allow me to be able to be excited and nervous at the same time, and I’ve never been to this kind of competition before, so it’s fun and different,” said Shagiyeva.