OPINION: We need to talk about Sinclair Broadcast Group 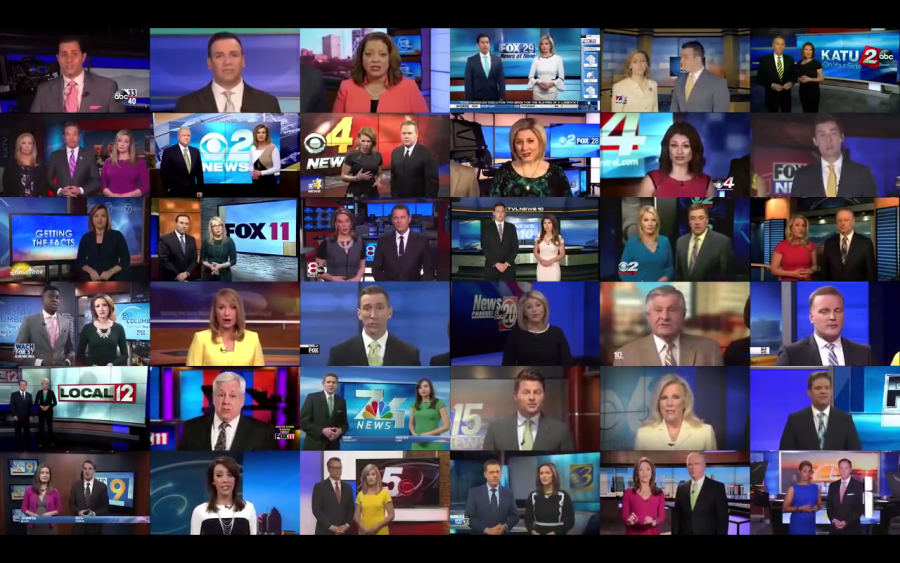 Before you go any further, watch this video:

That is an edit of local news outlets that are owned by media company Sinclair Broadcast Group.

Sinclair sent the same script about “fake news” to every single one of their stations with instructions that it must be read on air.

“This is extremely dangerous to our democracy,” all of the reporters say about “fake news.”

While it’s not uncommon for news outlets to purchase the rights to stories and use the same script as other stations, what that video shows is alarming. The script read by those anchors aired last year on a Las Vegas-based Sinclair station. In early March of 2018, CNN reported that Sinclair stations were being mandated to read the script for promos airing at the end of the month. The New York Times reports that some anchors are uncomfortable with this. As they should be.

The Federal Communications Commission (FCC) inspector general is conducting an internal investigation of FCC chairman Ajit Pai. Last year, Pai approved new rules that allowed broadcasters to own more stations. The investigation is into whether that move was done to directly benefit Sinclair, which signed a deal to purchase Tribune Media for $3.9 billion just weeks after the new rules were passed, The New York Times reports.

Here’s where things look sticky for Sinclair. On April 2, after the promos aired and the compilation video, which was posted to YouTube on March 31 with over 2 million views in just under a week, spread around the internet, President Donald Trump tweeted his support for Sinclair. 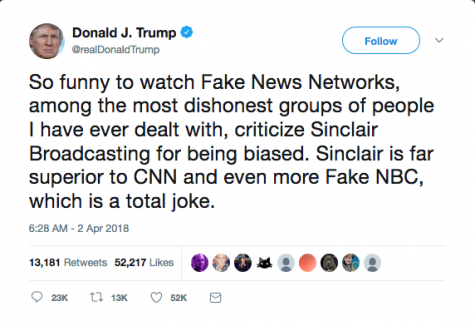 The script read by those reporters is about “fake news” and the stations’ loyalty to reporting the real news to their viewers. Trump is praising Sinclair because they are right-leaning, while bashing networks that don’t report in his favor. Trump wants to sway the public into believing the other news networks are lying about him to make him look bad, while the networks that support him are the only ones telling the truth.

This is extremely dangerous to our democracy.

News outlets do not exist to serve the fragile egos of politicians. A reporter’s duty is to report on the news, and often specifically that which concerns the government. Journalism has long been considered the fourth estate, or the fourth branch of government, with a duty to keep a certain level of transparency between the government and the people, regardless of what perceived image it may give the viewer of politicians.

If the deal between Sinclair and Tribune goes through, Sinclair will own more than 200 stations across the country and have a reach above the 39 percent threshold of U.S. households as mandated by the FCC. The company will effectively hold the largest media monopoly in our country, free to add its bias to hundreds of local news broadcasts.

This, too, is extremely dangerous to our democracy.

The truth of the matter is the Sinclair script was not about “fake news” and real news, but about political bias. It’s a conversation that’s hard to have without getting overtly political and dragging President Trump into it. It’s no secret that Trump has a desire for news networks only to report on stories that make him look good and he will go out of his way to publicly bash any station that doesn’t do so.

CNN, NBC and the other main news networks report on what President Trump does because it’s their jobs and it’s the people’s right to know. It’s up to the media consumer to decide whether they think the president’s actions are commendable or reprehensible. Trump’s “fake news” obsession comes about because he seems to think it’s the media’s job to make him look good.

And it’s not up to reporters at Sinclair stations to choose to read that propaganda-like script, since it was mandatory. One might think that if a reporter disagrees with the position of Sinclair, they have the choice to leave the company. Ah, if only it were that easy. An anonymous source leaked some Sinclair employee contracts, which revealed that leaving a Sinclair station before the end of a contract would be immensely and unfairly costly for an employee.

Sinclair is forcing its reporters to push its agenda, whether the reporters like it or not, because the executives know their employees won’t leave.

This kind of news business management is extremely dangerous to our democracy.

A press free of government influence is a bastion of liberty and without it, the hope of our nation is lost.