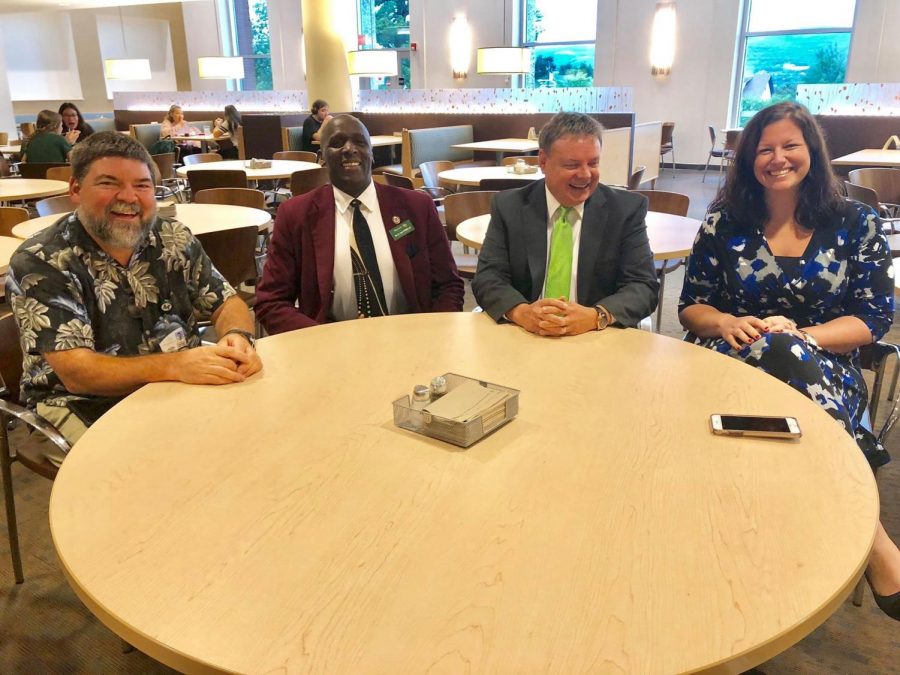 It’s a common question, but an unexpected group of friends gave it a new meaning.

Brown explained how the “Lunch Bunch” got its start in mid-December of 2017.

“We all started working at Marywood at roughly the same time,” Brown said. “I realized that I was relatively new, and I noticed that Tom [Steffes] was new to Marywood as well. I sent him an email first and we just started meeting for lunch.”

“Cara [Green] and Lee [Felder] were the cherries on top of the ice cream sundae,” Brown continued. “I realized this could be an amazing opportunity to have a connection with my co-workers, even if we don’t work in the exact same department.”

Steffes added to that and said, “Not everything has to be about work. We were meeting for lunch to give each other advice and to talk about what’s going on in our lives.”

And so, the Lunch Bunch was born.

At their weekly meetings, the Lunch Bunch speaks on a variety of things happening either on campus, within their departments or their home lives. From connecting with co-workers to discussing where the best deal for grocery shopping is, the Lunch Bunch covers it all.

“We all support one another,” Green said. “If one of us are struggling with something in our department, or in life in general, we know we can always go back and communicate with one another at the end of the week.”

However, with any new job, there comes some sort of difficulty. Unlike Felder, who said he had an “easy transition to Marywood,” Steffes and Brown both had their fair share of challenges coming to campus.

Struggle doesn’t have to last forever, though. Green, labeling herself as an “extroverted introvert,” said that if someone is struggling to find his or her place in the world, whether it be in school clubs, organizations or new jobs, it is important to reach out to those around the area.

According to Felder, people should try different things to get out of their comfort zones. He said it’s important for people to reach out to organizations they may not think they will like because they never know who or what they could find.

“Go with what your gut is telling you,” Brown added. “Be open to different points of view and don’t be afraid of advice that may not be what you’re looking for.”

Remembering a time when he was new to Marywood, Steffes said that it never hurts to be a friend to someone who feels alone.

“Be a friend to someone who is new. Be the kind of person you’d want someone to be to you,” Steffes said. “And go to the ice cream socials.”

The Lunch Bunch encourages any new faculty members to join them for lunch on Wednesdays at noon in the Nazareth Dining Hall.