Hit Start Review: Gaming’s best basketball sim is back with an ugly secret 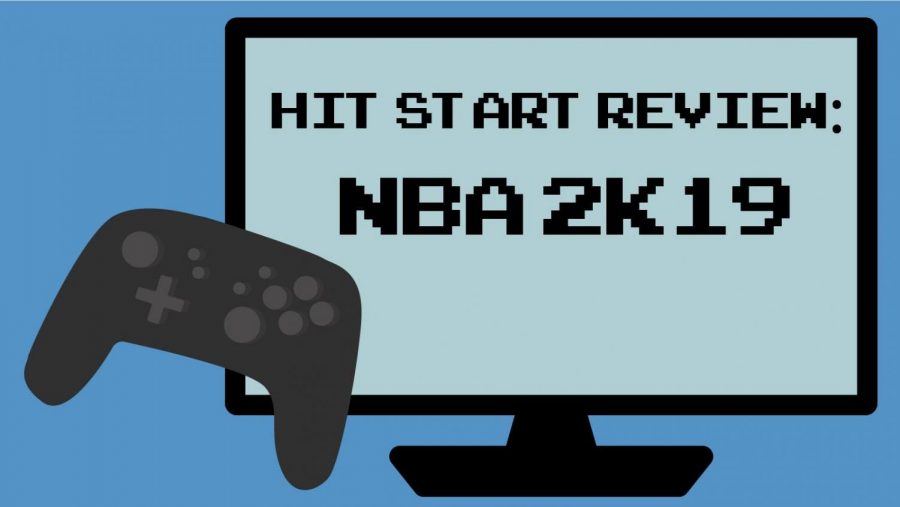 Basketball season is once again on the horizon and with another season of hoops comes another installment of the highest-rated basketball simulation game franchise on the market.

“NBA 2K19” sets out to expand on the smooth basketball gameplay the series is known for by adding new features in many of the games modes.

Even with the returning gameplay mechanics and flashy visuals, does “NBA 2K19” do enough to reclaim its title, or does it leave fans wishing for more?
Top of the class
Just as it has in years past, “NBA 2K19” continues to blur the line between reality and simulation. Whether it is watching Stephen Curry chew on his mouthpiece at the free throw line or seeing how players have the same tattoos in the game as in real life, it is clear the developers put a lot of love into making it seem like gamers are not only playing a game, but like they’re also a part of a real NBA broadcast.

Also adding to the immersion factor is the top-notch commentary by some of the most well-known names around the league. All of this, mixed with action replays, chanting from the crowd and on-court chatter from the players creates the most immersive sports game experience to date.

Although presentation is very important, none of it would matter if the gameplay wasn’t fun. 2K has players covered in that front is well. Something about crossing up defenders, splashing home three-point shots and dunking on players seven feet tall just never gets old. There are also major improvements made on the defensive end as well. Overuse of a pick-and-roll doesn’t create easy points as it could have in years past and as a result, adapting to find new ways to score is more important than ever.

However, steals seem a bit too easy to come by, especially when playing another person in the same room or online. Other than that, changes to the defense are a welcome fix to the gameplay and make “NBA 2K19” feel more like a simulation than an arcade-style game.
Building upon strengths
Returning to “NBA 2K19” is its flagship mode “MyCareer,” and with it comes a ton of positives, but some undeniable negatives. MyCareer once again opts to have a narrative accompany your player as he makes his journey to the NBA. Fans will either enjoy the narrative or will just opt to ignore it entirely. The 2K developers realized this because for the first time since NBA 2K decided to create these stories, there is the option to skip through all of it so playing basketball remains the main focus.

Once your player is created, they are then dropped into “The Neighborhood,” a virtual hub world where your player handles all off-the-court activities. While on paper, this idea sounds cool, but it’s executed poorly. Everything just takes way too long to do in this world. It just seems unnecessary to have a player walk all the way to the clothing store when it would be much easier to open up a menu and buy clothes from there. It feel like an artificial time filler more than anything.

The core basketball gameplay of MyCareer is the strongest it’s been in years. There is a wide array of different archetypes to model your custom player around, ensuring gamers can make a player that plays with the style they like most. Once your player improves, filling up the stat sheet becomes an addicting experience. Despite it just being basketball, the changes to the game’s defensive mechanics keep the gameplay fresh. However, the main issue here is the process of getting your player to improve. It’s part of a problem that sometimes upstages the game itself.
The ugly truth
There very much is a pay-to-win aura that surrounds the NBA 2K series and unfortunately, it remains with this game as well. If you don’t spend your hard-earned money on increasing your stats, be prepared for hours of grinding with a player that will rank as one of the lowest rated in the league. The issue is even more prevalent in the game’s MyTeam mode.

In MyTeam, gamers try to obtain NBA players in packs off the in-game market. You can use these players to build an ultimate fantasy lineup full of some of the best players of all time. The issue lies in opening these packs. Packs can be opened with either MyTeam points, which at times can be a chore to earn, or by spending real-world money on NBA 2K’s virtual currency (VC) Although there is no guarantee that spending real money will produce the best players, more often than not it seems that way.

It is a shame because MyTeam is one of the best modes the game has to offer. It retains the tight basketball gameplay seen throughout and mixes that with the ability to brand your very own team from custom jerseys, logos and arenas. Not to mention there is a plethora of challenges and modes within MyTeam to keep gamers busy. However, it’s difficult to compete against some online opponents when your team is earned rather than bought.

Rounding out the rest of the game are the MyLeague and MyGM modes. Both modes are fun, especially the former. They do a lot to make you feel in control of an entire league or team. Although there is a community of gamers out there who spend a lot of time with these modes, they come off more as fun time wasters. However, their inclusion does help flesh out the game with things to do.
Final thoughts
The NBA 2K series once again delivers the best basketball simulation game on the market. The core basketball gameplay is the tightest it’s ever been and is packed to the brim with things to do. Some ideas are executed poorly, and the especially ugly pay-to-win business practice is enough to turn some gamers off. Those who pay the price of admission will find a highly immersive and addicting experience.