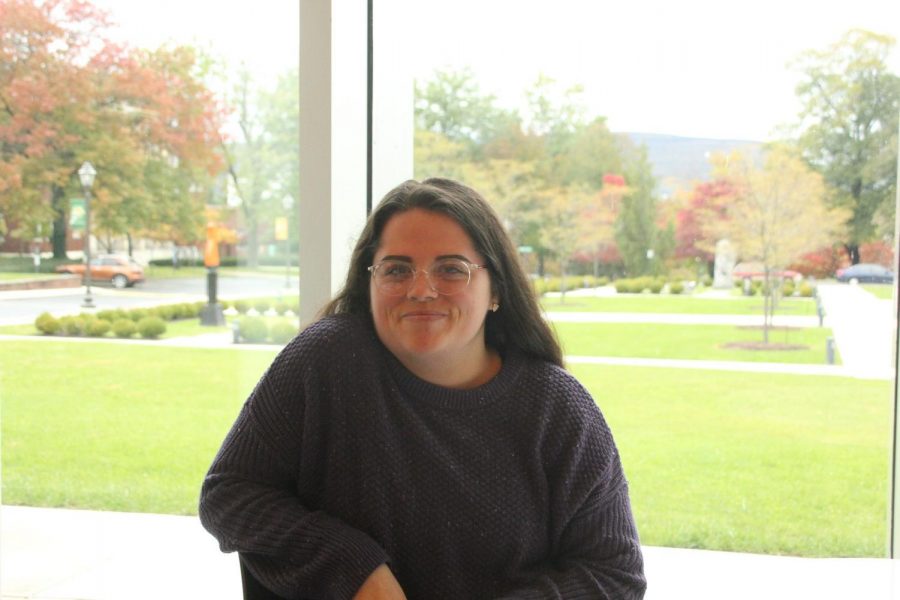 Gabriella Tolerico is involved in an assortment of different groups on Marywood's campus like Wind Ensemble, Wind Symphony and the Nomadic Chromatics, just to name a few. Photo credit: Justin Kucharski

For Gabriella Tolerico, music isn’t everything. It’s the only thing.

From a young age, music has always struck a chord in the music education and voice student. She has been singing ever since she can remember and has been taking piano and euphonium lessons for a number of years.

She cited hearing some of the all-time great singers her dad used to listen to such as Frank Sinatra and Elvis Costello as some of her biggest inspirations.

When it came time to make the decision on what she wanted to do for the rest of her life, being involved with music was seemingly the only option.

“I didn’t really see myself doing anything else,” said Tolerico. “I got the grades in school, but there wasn’t anything that made think “Oh, I can do this” other than [music].”

Hailing from Peckville, Pennsylvania, Tolerico is a part of the local community, but attended school for a year at Temple University in Philadelphia before making the transfer back home to Marywood.

She has her hands full on campus with her studies while also being involved in the Wind Ensemble, Wind Symphony, the Nomadic Chromatics, Concert Choir, Chamber Singers and helping with the Tutti Ensemble.

She also serves as president of the music education club NAfME. On top of everything, she teaches both voice and piano lessons outside of Marywood.

Tolerico said singing is and always has been her specialty. The intimacy of singing is what makes it stand out to her the most.

It took her only until middle school to begin taking singing seriously by joining choirs and taking voice lessons. By the time high school came around, she said it was all she could ever think about.

Although she has a broad taste in music, Tolerico said she really enjoys singing classical vocal pieces in a choir, which is why being a part of the Chamber Singers is one of the highlights of her week.

“Chamber Singers is like my chill hour. I love being in there. Everybody has their thing they like to do, and that’s my favorite hour of the week,” she said.

Along with being a part of the Chamber Singers, Tolerico said her involvement with the Tutti Ensemble, Marywood’s student-run program that teaches music to individuals with unique learning styles, as one of the most rewarding things she’s done thus far.

Just like any college student, for Tolerico, the grind is real. Along with her involvement in other clubs, she still spends many long hours and late nights down in the Performing Arts Center perfecting her craft, having coffee to thank for getting her through most days.